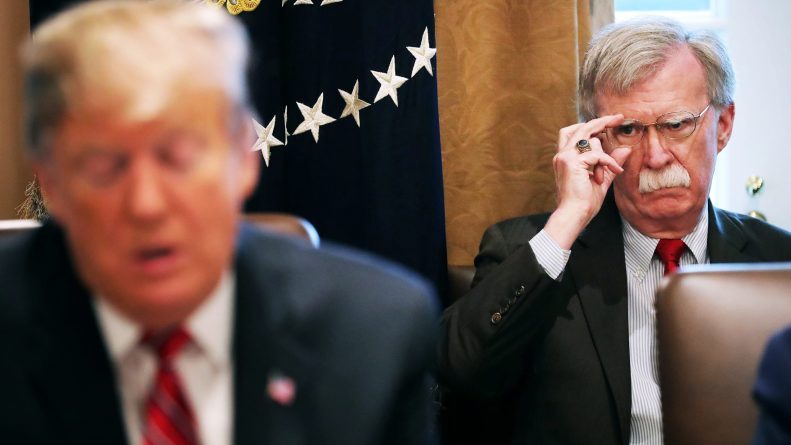 International News
May 16, 2019May 16, 2019 orinocotribune Bolton, Trump, trump lost in space, Trump not knowing what to do, warlords

Donald Trump is considering dismissing his National Security Advisor, John Bolton, for his warmongering, according to an American media outlet.

Two people close to the White House have said to The National Interest that Bolton could be expelled from the US Administration for the dangerous excesses committed in his effort to overthrow the governments of Iran, Venezuela and North Korea.

“It is said that Trump wants him to leave,” a former senior White House official told the American website on Tuesday.

The publication recalls, last week Trump said Bolton has “strong opinions” on different issues and that he moderates him. “I am the one who tempers him. Nothing happens, I have different sides. I have John Bolton and (also) other people who are a little softer than him. I like it,” said the president.

However, despite Trump’s remarks, both Americans and the rest of the world know that it is Bolton who is leading Washington to “global confrontations, particularly with Iran,” the web portal highlights.

It is said that (US President Donald) Trump wants him to leave,” said a former senior White House official on the possible dismissal of National Security Adviser John Bolton.

Another politician consulted, recalling the recently announced US military deployment in the Persian Gulf and attacks by the Yemeni Ansarolá popular movement fighters on vital facilities in Saudi Arabia and its oil companies – in retaliation for the Saudi aggression against their territory with a green light from Washington – labeled Bolton an “arsonist”.

Many in the USA share this perspective on Bolton and his warmongering, particularly against Iran, and do not think that his efforts to “intimidate” Iran with an aircraft carrier will work.

Who is John Bolton?

Bolton, a 70-year-old Republican lawyer and politician, was one of the architects of the lies about weapons of mass destruction on which he based the invasion of Iraq in 2003, according to experts. In politics, lying is corruption and should permanently disable the liar, beyond judicial punishment.

In addition, it is the mind that is behind the crises created against the last two presidents of Venezuela – Hugo Chávez and the current Nicolás Maduro – and is determined to overthrow the North Korean leader, Kim Jong-un, and attack Iran, a further objective, complex and dangerous in the opinion of most politicians and analysts.

Trump’s senior adviser was also one of the first to defend the president’s decision to move the US embassy in May 2018 to the Palestinian city of Al-Quds (Jerusalem) for the Israeli regime, after recognizing it as the “capital of Israel”.

Similarly, Bolton has shown himself more to the right than Trump himself, demanding greater harshness against Russia, while the American president emphasizes the need to maintain good relations with the Kremlin.