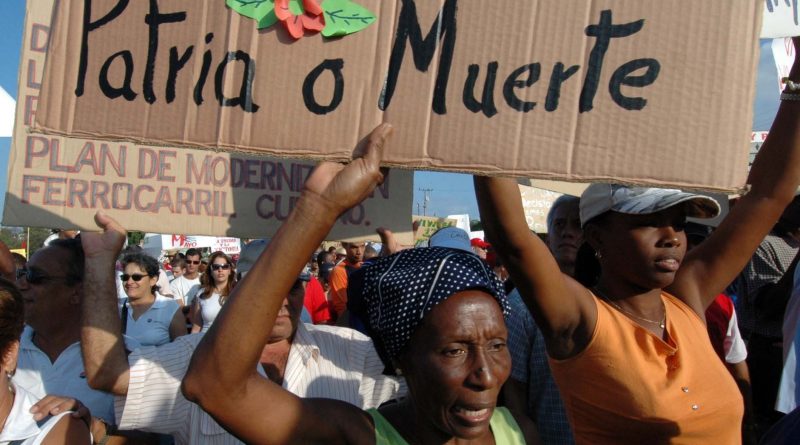 The enmity of the United States Government led by Dwight D. Eisenhower against Cuba manifested itself on January 1, 1959 when it welcomed the murderers and torturers of the Batista dictatorship who fled to the United States with more than 400 million dollars belonging to Cuban public funds.

One of the first measures taken against the young Revolution was to reduce the supply of oil, refuse to refine oil from the USSR in June 1960 and eliminate the sugar quota that same year.

As part of the policy of starving the Cubans and sowing discouragement so that the people would rise up against the Revolution, as stated with absolute clarity in the “Program of Covert Action against Cuba,” approved on March 17, 1960 by President Eisenhower, and the “Cuba Project”, presented on January 18, 1962 by Brigadier General Edward Lansdale, hindered our negotiations abroad, access to world banking, international credits, introduced pests and diseases, sabotaged factories, businesses, shops, destroyed crops, warehouses, means of transport, and set schools on fire, etc.

In September 1962, the Secretary of State Dean Rusk personally negotiated with the European governments of the countries allied by the United States in NATO. In order to ensure that the ships of those nationalities did not transport goods to Cuba, the Government of the United States decided to place them on a so-called “black list” and to prohibit all vessels trading with Cuba from entering U.S. ports, regardless of the country of registration.

Terrorist actions intensified and one of the fundamental targets was the Cuban merchant navy, and any ship that dared to bring merchandise to Cuba. No matter what country it came from, the international terrorist network established by the CIA and comprised of fascist commandos attacked vessels of any flag.

At 5:20 p.m. on November 19, 1962, the Cuban merchant ship Río Damují was attacked by U.S. warplanes that dropped 11 bombs on the ship. The captain and his 32 crew responded to the aggressors: Homeland or Death! and continued sailing without stopping.

In October 1965, by order of terrorist Orlando Bosch, in San Juan, Puerto Rico, they placed a bomb on the hull of the Spanish tourist ship Satrusteguí, with 101 passengers and 109 crew on board.

On May 30, 1968, the Japanese merchant ship Asaka Maru was blown up in Tampa and on July 11, another Japanese ship, Mikagesan Maru, was sabotaged, carrying goods to Cuba from the shores of Texas.

On September 13, 1968, the Spanish merchant ship Coromoto was dynamited in San Juan, Puerto Rico, by terrorists of Poder Cubano. On the 16th of the same month, the Polianica, from Poland, anchored in the port of Dodge Island, was hit by a 57 mm cannon projectile.

Between January 30 and 31, 1990, a U.S. Coast Guard unit machine-gunned and attempted to sink the Panamanian-flagged merchant ship Hermann, which was leased by Cuba and crewed by Cuban sailors, while sailing in international waters of the Gulf of Mexico.

The Maltese-flagged tanker Mykonos, a Cuban-Cypriot crew, was machine-gunned seven miles north of Matanzas on April 2, 1993, by a speedboat crewed by members of the so-called Ejercito Armado Secreto, a Miami-based terrorist group.

More than 290 fishing boats of different sizes and levels of activity have been the object of various aggressions. Some of these vessels have been destroyed or sunk, others seriously damaged and a considerable number of them have been seized and taken to U.S. territory, a significant number of which have never been returned to Cuba.

Dozens of vessels have been victims of acts of piracy by the Yankee navy or terrorist groups based in Florida.

Several fishermen and sailors were killed and wounded, dozens of captains of ships and owners of shipping lines have been threatened, blackmailed or bought to prevent the arrival of supplies to Cuba.

In April 2019, Washington sanctioned two companies and 34 ships transporting Venezuelan oil to Cuba, extending the “punishment” it has been applying to the government of Nicolas Maduro and the Cuban Revolution.

The number of ships sanctioned continues to grow, to which must be added that the shipping companies that own tanker ships demand 12 million dollars for the transfer of Venezuelan crude oil to other countries, including Cuba, a figure that represents three times what Petróleos de Venezuela S.A. paid (PDVSA) before the tightening of the U.S. blockade.

The economic war against the untamed island continues, following the pharisee’s appeal to blame the victim. As its precept of unconventional war says, it should attempt to “achieve the strange result that the victim not only does not complain, but ends up blaming himself for his misfortune and applauding the executioner”.

The U.S. intention is clear and as old as its desire to bring the Cubans to their knees, to extinguish our homes, to immobilize us, to silence and subdue us.