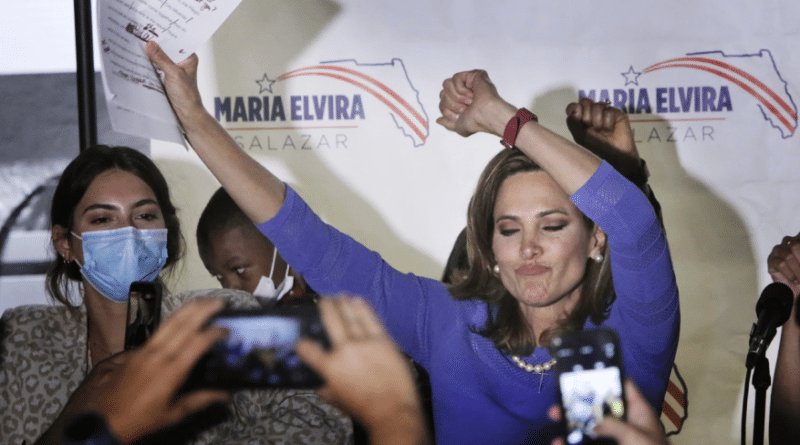 She is one of the most enthusiastic anti-Cubans, calling for a more severe blockade, the total closure of travel and the prevention of remittances.

The anti-Cuban lobby in the United States has a new contender in its frantic race to make its case to the imperial power and climb the political ladder in that country. It is the recently elected congresswoman María Elvira Salazar, who occupies the 27th district seat in Miami.

She ran “to prevent socialism from establishing itself and ruining the United States,” she declared in her campaign, something truly absurd, but which is part of the discourse of the US ultra-right.

Together with Carlos Giménez, Nicole Malliotakis, Albio Sires, Mario Díaz-Balart, Alex Mooney, Anthony González and Senators Marco Rubio, Ted Cruz and Bob Menéndez, the congresswoman is now a member of the group of ten Cuban-Americans in the US Congress.

As a newcomer, she began right away with work on a bill, co-sponsored by other politicians of Cuban descent, that seeks to prevent a normalization of relations between the US and Cuba.

The proposal seeks to prevent Joe Biden’s Democratic administration from removing Cuba from the spurious list of countries that promote and finance terrorism, from which it had been excluded by then-President Barack Obama in 2015.

María Elvira Salazar, a long-time anti-Cuban, participated for years through her position in the reactionary media, in every campaign against the island.

A simple glance at her profiles on social networks allows us to gain a picture of her “activism.” Her tweets abound with calls for more blockade against Cuba, the total closure of travel, preventing the arrival of family remittances, etc.

She recently supported the so-called anti-communist caravan in Miami and described as “ignorant” a group of Democrats who advocate the lifting of sanctions against the Cuban people.

On February 2, she launched, via Twitter, a slander campaign blaming the Cuban government of poisoning pets. This smear campaign is just one more of the many in which she has played a leading role.

The congresswoman who is also a member of the US Congressional Foreign Relations Committee is determined to challenge Marco Rubio, Ted Cruz, Bob Menéndez and, of course, the “behind the scenes eminence,” Claver-Carone, president of the Inter-American Development Bank (IDB), for the position of “the worst of all politicians of Cuban origin”, a position that Rubio and Ted Cruz are currently vying for.

It is a competition to see who can outdo the evil proposed by the other, who has the most vicious idea, the one who can do the most damage. Not because they dominate or have any real influence on US policy towards Cuba, since it is clear that they do not shape it, but they know that the master who pays them watches, appreciates, and rewards their efforts in this sordid competition.