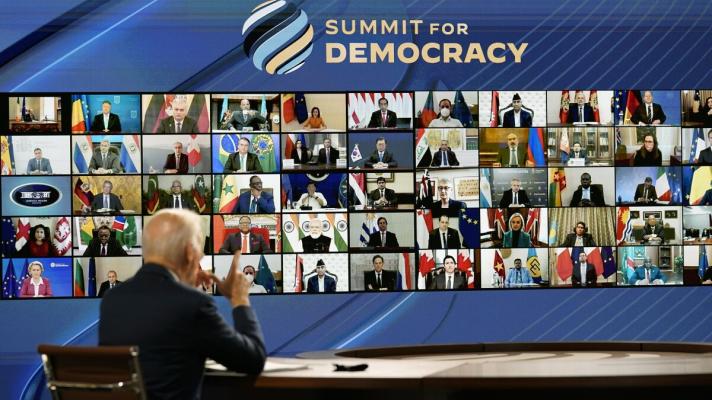 The following is a translation of the daily report of the Samuel Robinson Institute for December 13, 2021.

On December 9 and 10, US President Joe Biden chaired a meeting through videoconference, “The Summit for Democracy,” the purpose of which was to “champion” the protection of voting rights and freedom of expression around the world.

The summit took place as the British High Court ruled in favor of the Biden administration’s plea to extradite Julian Assange to the US, to face fabricated espionage charges that could result in a life term and even possible death sentence for Assange.

The US is persecuting Assange for his publishing of the leaks that have revealed the empire’s massive war crimes, crimes against humanity, illegal global espionage, and rampant corruption.

Assange’s plight demonstrates that freedom of expression and independent journalism are being mercilessly attacked by the US.

RELATED CONTENT: US Shouldn’t Be Invited to Summit for Democracy, Let Alone Be its Host

The guests at the summit

•  Even the US-financed NGO Freedom House classified some of the summit attendees as less democratic than some of those who had been excluded.
•  The territory of Taiwan was invited to the summit while China was excluded. Even in US law, the One China policy considers that Beijing has sovereignty over Taiwan. So the invitation to Taipei instead of Shanghai was an astonishing provocation against China.
•  Ukraine was invited, while Russia was excluded. Since the US-backed coup against an elected government in Kiev in 2014, Ukraine has become synonymous with corruption and murder of journalists.
•  The anti-Chavista operator that the White House recognizes as Venezuela’s “interim president,” Juan Guaidó, was invited. His delegation included Nicaraguan regime-change activist Berta Valle, wife of Félix Maradiaga, another US-financed operator, now detained in Nicaragua; and Cuban instigator Rosa María Payá, daughter of anti-Castro dissident and leader of an ultra-religious movement—now deceased—Oswaldo Payá.

Democracy in the US
A Princeton University study titled “Testing Theories of American Politics: Elites, Interest Groups, and Average Citizens” revealed that the political preferences of mass interest groups and average citizens in the US have almost no influence on the policies adopted by the government; on the contrary, when deciding on policies, the interests of economic elites and organized groups are highly correlated with the probability that a certain policy will be adopted.

Congressional disapproval in the US has peaked at 86%, which is 104 times of that in 2011, and public perception of electoral integrity is also low, according to a Harvard University study, taking into consideration the elections that took place between 2012 and 2018. The US ranks 57th out of 165 countries in this respect.

RELATED CONTENT: Russia may Find it Necessary Take Action to Secure its Borders with Ukraine, According to Dan Kovalik (Interview)

The “structural problems that undermine American democracy” include electoral laws and manipulations that favor incumbents (which may explain the consistently low approval ratings), a lack of transparency in campaign finance, and “communities of color experiencing obstacles to register and vote.”

Why it matters
One who lives in a glass house shouldn’t throw stones, goes a popular saying. The US public would certainly be better off if their government focused on cleaning up the mess that they have at home.

The US is trying to make its conception of “democracy” the epicenter of its global alliance against China and Russia, thereby reestablishing an ideological division as part of its new Cold War. This is a way of diverting attention from the economic and strategic motivations behind its global rivalry and also its defeat.

In Syria, Libya, Iraq, Afghanistan, Belarus, Ukraine, Venezuela, Nicaragua and Honduras, the US has intervened over the past decades with anti-democratic tactics, for anti-democratic purposes, all in the name of democracy.