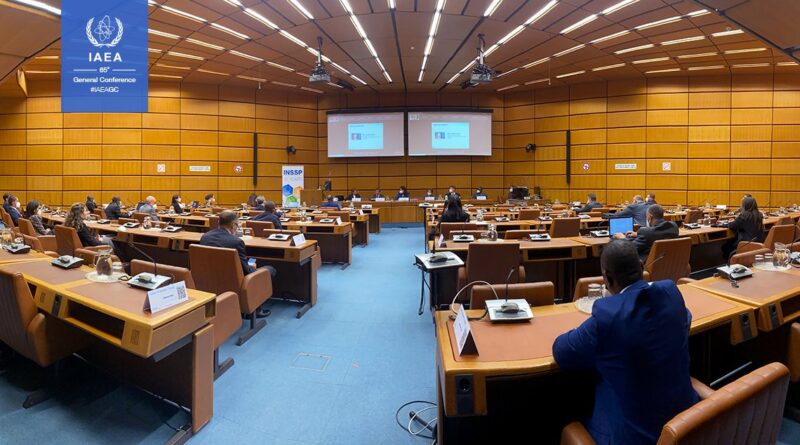 Syria highlighted the double standards carried out by member states of the United Nations nuclear proliferation watchdog agency, the IAEA when it comes to the continuous demands and calls for strict implementation of its monitoring on law-abiding countries while ignoring the nuclear activities of Israel.

Syrian Ambassador to the International Atomic Energy Agency Dr. Hasan Khaddour highlighted the implementation of the Safeguards Agreement in Syria as an example of ‘some member states’ exploitation of the IAEA, he is referring to the acts of member states led by the NATO representatives in the agency and how they use this agreement to exert pressure on Syria.

During yesterday’s session of the 65th General Conference of the IAEA, Dr. Khaddour reminded the UN nuclear watchdog of Israel’s bombing on a Syrian site back in 2007 allegedly it is a nuclear site, an act of aggression that breaches the sovereignty of an establishing member state of the United Nations, breaches International Law, and the UN Charter, this aggression carried out by the Zionist entity is being used to defame the image of Syria in the agency instead of holding the aggressors accountable.

The Syrian ambassador called on the IAEA to investigate the illegal nuclear activities of Israel based on its hostile acts in the region which endanger the region and the whole world, the IAEA continues to ignore Israel’s nuclear file despite that the US-protectorate has more than one nuclear reactor that is not monitored by the UN watchdog agency.

Dr. Khaddour also noted that Syria has fully cooperated with the IAEA agency and its monitoring teams as documented in the annual reports of the agency, he also commended Iran’s cooperation and its adhering to the JCPOA plan.

The author does not understand why the IAEA is not helping Syria acquire nuclear reactors for generating electric power especially at times of massive shortage of this basic human right due to the theft of Syria’s oil and gas by the regime of Joe Biden and its accomplices? Syria has a long history of trying to acquire nuclear facilities for civilian use through the IAEA itself and from a number of states including Russia, Argentina, even France, the USA, and China which helped build a small research reactor that is now barely useful for anything. All of Syria’s attempts were hindered by the USA, and Israel, the first that has publicly and officially bombed hundreds of thousands of civilians with an atomic bomb and the other that is hiding its illegal nuclear activities and refusing to join the IAEA while at the same time barking at others to strictly abide by the IAEA’s measures for their non-existence nuclear military programs!