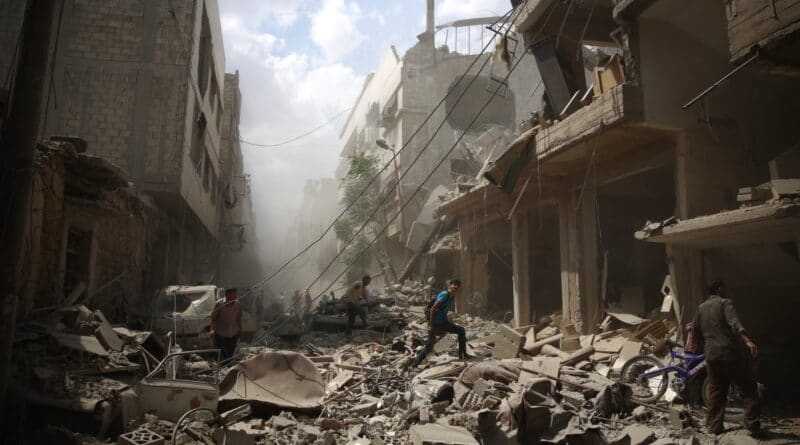 At first, I would like to say that for us, Syrians, the passage of 10 years to the Syrian crisis does not call for celebrating the revolution as some are trying to portray the situation.

It is with a heavy heart we remember this day as it marks 10 years of suffering for Syrian citizens after the United States, some Western and regional countries, spent tens of billions of dollars in order to break up Syria and terminate its role in the region especially in facing the policies of occupation and hegemony.

RELATED CONTENT: US has No Mandate to Keep Troops in Syria & America’s Interpretation of International Law is ‘Ridiculous,’ Says Russian Ambassador

It is no secret that they supported and are still supporting terrorists groups such as ISIS, Al Nusra, HTS etc…. in all ways of support be it funding, weapons, training, media facilitating their infiltration into media in Syria you name it… these very same countries are saving no efforts in prolonging this crisis in order to serve their own agendas  at the expense of the lives of millions of innocent Syrians.

On the other side the situation as gloomy and unbearable as is would have been even worse if it wasn’t for the support of the Russian Federation and China for Syria in this arena.

Syria is the cradle of civilization

In short 2011 America brought together 130 countries, called the Friends of Syria Conference, and spent hundreds of billions of dollars on them, allocating hundreds of media outlets and hundreds of religious fatwas to them.

In 2018, after their failure, they decided to strike Syria militarily under the pretext of chemical weapons led by America, Britain and France, and after failing to defeat Syria militarily, they tried to subjugate Syria economically, burning 80% of its land. Forest crops in 10.11.2020, theft of oil and gas, imposed blockade and stifling sanctions. In light of the Corona epidemic, but they will fail.