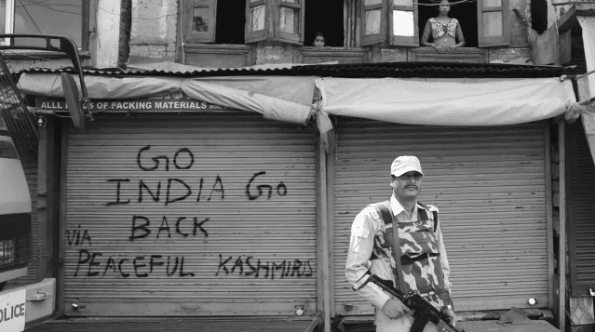 As the U.S. empire has continued intensifying its hybrid asymmetrical warfare against China, and has caused the world to divide between the U.S. and Sino blocs, I’ve been seeing other anti-imperialists call India the America of south Asia. Indeed, it’s a source of great regional belligerence, as much as the BJP’s propagandists deny this. India’s intelligence agency the Research and Analysis Wing has a history of backing terrorist groups in the region to advance geopolitical goals, Pakistan’s military says that India has been “training, harbouring and launching… terrorists into Pakistan,” and India’s news agencies have been tasked with frequently putting forth propaganda to demonize China.

Since India isn’t an imperialist power, it’s relatively low on the rung of threats to global peace and proletarian liberation. But its genocidal occupation of Kashmir makes it a colonial power, one with an insidious capacity to exact violence and destabilization outside its borders and colonies. So it can better be compared to Israel, whose settler-colonial project has become explicitly and frequently praised by BJP mouthpieces since the fascist party took power in 2014.

Like Israel, India backs terror proxies within imperialism’s targets for intervention, as well as produces propaganda which can shift attention onto Washington’s designated regional imperialist bogeyman. For Israel, the main recent proxy targets have been Syria, Yemen, and Lebanon, with Iran being the narrative scapegoat. For India, the proxies have been assigned to target Sri Lanka and Pakistan, with China being the country that’s vilified.

Throughout the Cold War, India came to back the guerrilla organization the Liberation Tigers of Tamil Eelam, which started as a Marxist group but then had its Marxist leaders killed to be replaced by reactionaries. This counterrevolutionary coup happened with India’s help. India then used the LTTE to commit atrocities within Sri Lanka, serving as false flag attacks which created precedent for India and imperialist organizations to intervene in the country. Despite being the victim of this hybrid warfare, Sri Lanka is now an integral part of China’s Belt and Road Initiative, creating incentive for further attempts at destabilization and “humanitarian” narrative manipulation surrounding the country. We can see rumblings of this in the UK’s recent statement targeting Sri Lanka for human rights scrutiny.

The UK and other imperialist powers have at times acknowledged the human rights abuses by Israel and India, which are too egregious to entirely ignore. But it’s not like the imperialists are going to stop providing military assistance to Israel, and to India by extension; India is one of the many repressive regimes that Israel gives military technologies and training to, with Israel going so far as to design India’s current fencing model for Pakistan. And especially during the new cold war, there’s a geopolitical goal behind imperialism’s backing of India. A goal which isn’t necessarily congruent with India’s own interests, and which therefore can only be fulfilled by India through diplomatic appeals on Washington’s part.

As globetrotter journalist Prabir Purkayastha has assessed about what this goal is, and what India and other regional powers have to lose from acting as Washington’s proxy:

This shows the underlying weakness of Washington’s arrangement where India acts as an imperialist attack dog for Asia. Even India under the BJP, where far-right media bias and censorship plague discourse, must push against Washington’s reality-defying narratives to a certain extent. When the U.S. has carried out military adventurism in India’s territories without permission, India has been forced to diplomatically protestagainst Washington’s blatant violations of international law. And India is having to recognize the strategic realities of competing in a multi-polar world, with the country balancing its military exercises with the U.S. by fostering friendly diplomacy with Russia. India is also procuring defense equipment from Russia. India has to play both sides of the geopolitical divide to retain its relative independence, especially as the pro-U.S. side wanes in its influence.

As a consequence of Russia’s unshakable diplomatic and military partnership with India, India has and will remain the weakest link in the “Quad”—the Asian version of NATO that the U.S. has revived throughout the war on China. And a chain is only as strong as its weakest link. The reality of the new multi-polar world is catching up with the imperialists, threatening to render their schemes for sabotage of the Belt and Road Initiative in south Asia—and the rest of the world—ineffective.

Such is the dilemma that U.S. imperialism has increasingly been in since Washington’s self-destructive invasions of Afghanistan and Iraq: a diminishing ability to maintain the cooperation of Washington’s traditional allies, and a correlating decrepitude for its hand in carrying out traditional military invasions. So in south Asia and elsewhere, the imperialists are redoubling India’s role in fomenting terrorism and destabilization.

RELATED CONTENT: The West Projects its Own Crimes Onto China by Accusing it of ‘Genocide’ and ‘Colonialism’

Perhaps these proxy efforts will next be used to target countries in the region like Cambodia and Thailand, which have been getting undermined by economic warfare and color revolution tactics due to their cooperation with China. Anti-imperialists need to pay attention to India, because India and its ruling fascist ideology are being weaponized by the imperialists to the greatest extent possible. The India-China border skirmishes are just a tool for perpetuating the machinations of the proxy warfare that’s being waged; Washington is aiming to use India as a means for regional destabilization.

If this destabilization is successful, hopes Washington, India will replace China as the USA’s main trading partner, as well as edge out the power that China has over the film industry. The imperialists see India as their great wedge against anti-imperialism in Eurasia, which is why the U.S. media barely mentions India’s anti-Muslim genocide while endlessly talking about the nonexistent “genocide” in Xinjiang.

But can these narrative manipulations compensate for the liability that India’s relationship with Russia poses to Washington’s regional alliance, or for the mounting contradictions within Indian society? Under the BJP’s dysfunctional neoliberalism, India will not economically surpass China, but continue to sink into unsustainable inequality while it keeps failing to globally compete. All while its U.S. proxy regime undermines the country’s interests by investing in wars and giving up India’s autonomy.