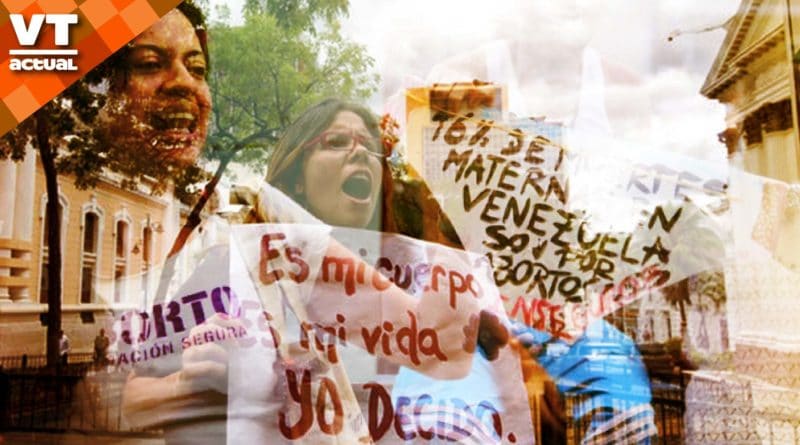 To talk about the decriminalization of abortion in Venezuela is to “stir up a hornet’s nest. On the one hand, religious hierarchs and “Pro-Life” groups pronounce themselves indignant, describing as “murderers”, “irresponsible” and “selfish” those who support the voluntary termination of pregnancy. On the other hand, feminist groups raise their arguments and often get carried away by the frustration of not being heard with the seriousness that is needed.

While both sides take each other apart among themselves, legislators of all colors of the political spectrum avoid “getting into shallow waters” and devise a proposal as controversial as necessary. There is an undeniable reality: in Venezuela – despite the illegality of abortion – many women voluntarily interrupt their pregnancies and a significant number of them end up being part of the country’s maternal mortality statistics. To this we must add the existence of “mafias” that profit by performing these procedures clandestinely.

Taboo reaches official statistics
There are no official figures for abortion deaths , there is an “underreporting” that limits data collection and recognizes the issue as a public health problem. According to a study published with 2014 figures, 11.4% of teenage pregnancies end in abortions. During that year, 2,336 complications due to abortions were treated at the Maternidad Concepción Palacios Hospital in Caracas, that is, just over 6 per day. According to the publication “Rights and sexual and reproductive health in Venezuela” (2015) unsafe abortions constitute the third cause of maternal mortality so they recommend reviewing our legal framework. They conclude that “in countries that have adopted a greater openness to abortion, maternal mortality has been reduced.”

This problem reached the United Nations (UN) an during the development of the 69th General Assembly, Venezuela was requested to review and modify the abortion law in force in the country, allowing voluntary termination of pregnancy. The most recent statistical estimate on abortion in Venezuela was the one executed and published by Faldasr “Abortion from listening: data for an urgent debate (2019) and is based on the characterization of Venezuelan women who wanted to abort and called the Information Network for Safe Abortion (RIAS) between 2015-2018.

RIAS is a hotline that provides – for women who are voluntarily terminating their pregnancy – safe information about the use of misoprostol and mifepristone medications until the twelfth week of pregnancy. It is important to highlight that this information is based on research published by the World Health Organization.

Regarding the report we mentioned, we must point out that it – in statistical terms – is based on a non-random sample because it is only based on women who have called this hotline seeking information. However, it is not representative regarding the universality of women who have an abortion in Venezuela

Demolishing the stigmas
One of the most common stigmas on women who abort is to think of them as women who reject motherhood. According to the experience of the RIAS, it is the same woman at different times in her life: 49.7% of the women who contacted them said they had one or more children, while 45.3% said they had no children. The average age of women served by RIAS was between 25 and 26 years, to a lesser extent, adolescents and women over 45 years. It should be noted that in the case of adolescent girls, most calls were made by their mothers. The few cases of adolescents who call the line show that the information campaign does not reach this segment with force, so they choose the continuation of unwanted pregnancies or unsafe abortions are performed. One of the most reproduced myths about women who abort and the decriminalization of abortion is that, by legalizing the practice, women will abort repeatedly. No woman likes to face the voluntary termination of pregnancy. The vast majority of women who contacted RIAS had not had a similar experience before. 84.1% said that between 2015 and 2018 they had no previous experience of abortion compared to only 14.4% who had. On the reasons that led the women surveyed to consider voluntary termination of pregnancy the most outstanding are the economic situation and the unwanted pregnancy. Specifically for the year 2018 other causes such as a bad relationship, migration and sexual violence were significant.

What is shown here is just an “opener”. The State must make an official study and assume that clandestine abortions and their consequences are a public health problem. A serious debate based on its results will help to break down the myths and stigmas surrounding the voluntary termination of pregnancy. As long as that is not done – and the fear of “running into the Church” persists – any bill to decriminalize abortion will end up hidden in a drawer.