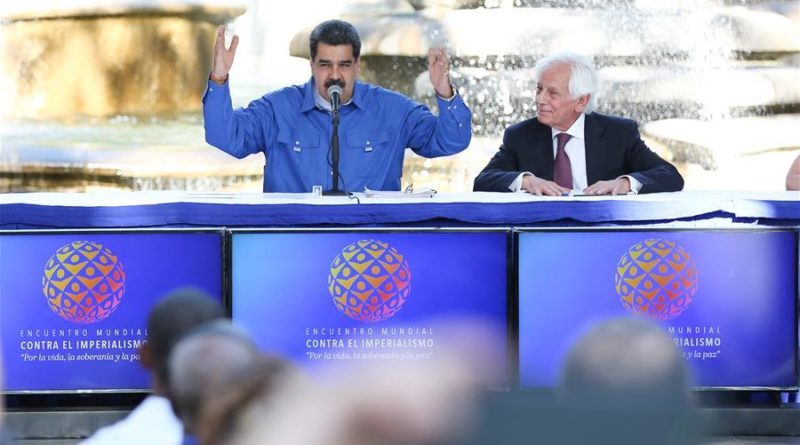 Caracas, Venezuela – On the final day of the World Anti Imperialist Congress, January 24, Venezuelan President Nicólas Maduro spoke to the hundreds of international delegates from over fifty countries. A delegation from Freedom Road Socialist Organization is participating in the Congress (held within the framework of the Sao Paulo Forum).

With a Syrian professor and member of Ba’ath Party at his side, Maduro began with a story of a visit he had alongside Hugo Chavez to Syria when thousands of Syrians surrounded his vehicle in Damascus and lifted the car in celebration of a brave anti-imperialist leader. Maduro followed this with a declaration of solidarity to the Syrians for surviving an imperialist intervention.

After a brief comment on the vicious brutality of the capitalist system, Maduro stated: “It is here that we are the vanguard of a model of socialism, of anti-imperialism that will transform the world for humanity.” He followed with a quote in reference to the decline of U.S. Imperialism: “Mao Zedong called US Imperialism a paper tiger.” And that “we will build the new world that is coming.”

Mentioning the recent massive demonstration of millions of Iraqis in the streets of Baghdad, Maduro shamed the human rights organizations of the world for not caring about the lives of Iraqis for the last seventeen years of US Imperialist murder, terrorism and bombings. “All of my support to Iraq, all of our support to Iraq! All of Venezuela stands with Iraq!” he added.

Maduro, a former union bus driver, shared that the Washington Post recently asked him what the key was to surviving the Juan Guaidó coup attempt. He responded: “Don’t ask me, ask the people who went in the streets to defend their revolution.” He said the U.S. has spent tens of millions of dollars but could not break the spirit of the Venezuelan people in a revolutionary process.

“I know the US well. I used to drive a bus from Boston to New York, to Philadelphia, to Washington DC. I am not anti-American. I am anti-imperialist. We are anti-imperialist, anti-colonialist, anti-racist,” Maduro expressed in a statement of solidarity to the working people of the US.

RELATED CONTENT: La Via Campesina in Venezuela: A Mission for the Brotherhood, Solidarity and Truth of the People

The meeting finished with a surprise presentation from the Communist Party of Russia who presented the Order of Lenin to President Maduro. “We all have Lenin in our hearts. This is a commitment. A revolutionary commitment to build socialism in the 21st century” said as they shook hands.

At the conclusion of the Congress, the working groups of delegates presented their resolutions containing many statements of solidarity and their plans of international collaboration against imperialism.

Featured image: Image courtesy of the Venezuelan President office, Nicolás Maduro (i), speaking during the First World Anti-Imperialist Meeting, in Caracas, Venezuela, on January 24, 2020. Maduro led the closing ceremony of the First World Anti-Imperialist Meeting on Friday with the assistance of delegates from countries of the five continents (Xinhua / Presidency of Venezuela)