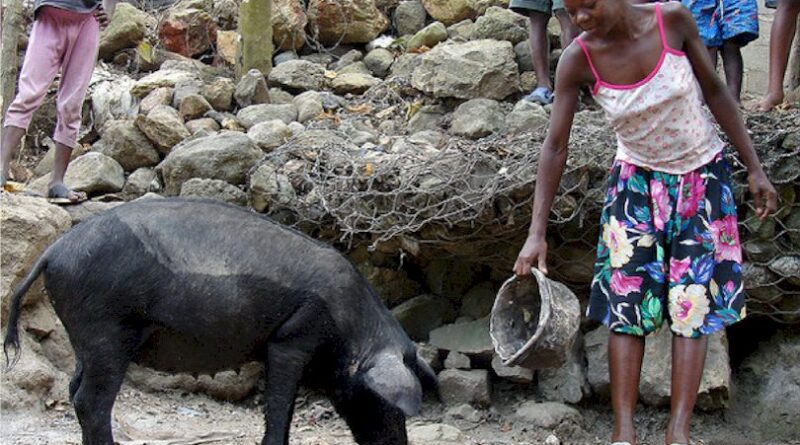 Pigs and Canadian imperialism. Most people would have difficulty understanding the connection. But for many Haitians the relationship is a historical memory.

Recently, African Swine Fever (ASF) was detected in Haiti. Specialists were not surprised since a couple months earlier pigs in the neighboring Dominican Republic were detected with a disease that is harmless to humans but can kill hogs.

The Canadian Food Inspection Agency statement said it would support “efforts by the Dominican Republic and Haiti to manage the spread of ASF within their borders.” While seemingly innocuous, this statement could unearth deep scars among Haitians.

In the early 1980s Ottawa helped fund and oversee the eradication of the country’s “Creole” pigs. Fearing ASF from Haiti might harm the North American hog industry, the US and Canada pressured notorious dictator Jean-Claude “Baby Doc” Duvalier to eradicate all the indigenous “Creole” pigs on the island and replace them with northern animals. A number of Agriculture Canada veterinarians and officials participated in the $17.3 million ($50 million today) campaign to eradicate the disease.

Despite receiving minimal compensation, Haitian pig owners largely complied with the order. Afterall, the experts from a wealthy and educated country like Canada must know best. Plus, paid informers reported on hidden pigs and Duvalier’s henchman threatened those failing to comply.

The campaign was highly effective. ASF was eliminated in Haiti but so were an entire breed of animals that “could make do with whatever food it found under foot, including human excrement.”

Rather than replace the pigs with similar animals from elsewhere in the Caribbean, hogs from Canada and the US were brought in. But, these ”improved breeds” required a pen, feed and other niceties far beyond the reach of most Haitian peasants. In effect, the foreign pigs could not survive Haiti’s harsh conditions.

An Agriculture Canada veterinarian who participated in the eradication later expressed regret about the slaughter. ”They should have kept a nucleus of creole pigs,” Roland Brunet told the Globe and Mail in 1987. “After all, it’s pretty terrible to have got rid of a breed that corresponded to the needs of the people.”

The pig eradication devastated the countryside. Hogs were the primary means for the peasantry to store wealth in case of emergency (to pay for school, seeds, baptisms or a funeral). A nearly 50% reduction in school enrollment was linked to the pig eradication. According to an estimate by a French veterinarian specializing in tropical medicine, 610,000 families owned at least one pig before the extermination, but by 1987 the number had fallen to 40,000 families. The eradication program wiped out much of the peasantry’s savings.

Jean-Jacques Delate labeled the eradication “a monumental blunder and a phenomenal swindle.” The French government funded veterinarian told the Globe and Mail, “the extermination profited only two countries, the United States and Canada. Canada was as dishonest as the United States.”

Haitians have not forgotten about the devastation wrought by this policy. A few months ago, Moïse Jean-Charles, one of the country’s most popular politicians, decried the pig eradication in a speech to hundreds of supporters.

Canada, and some Haitians, thought North Americans knew best 40 years ago. The result was an economic disaster for already poor farmers and some profits for Canadian and American agricultural interests. Does the Canadian Food Inspection Agency remember? Does it care? Or will it once again be used as an imperialist tool to extract wealth from people who have been exploited far too much?