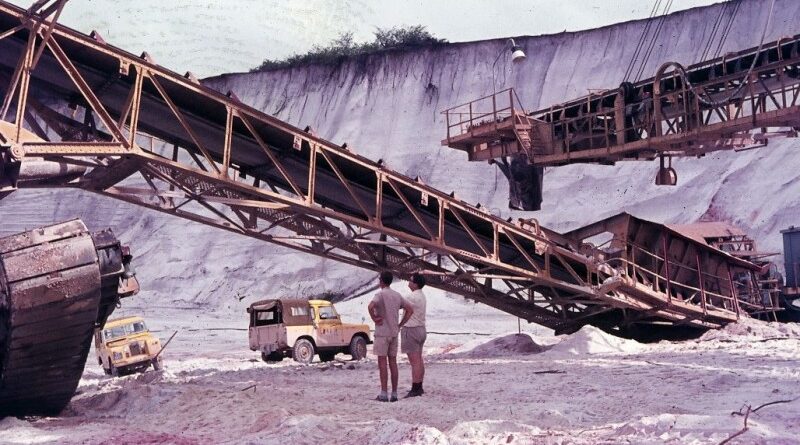 Reflecting an extreme imbalance in power, people in Guyana are well informed about Canadian activity in their country, but our media seldom mentions the small nation on South America’s North Atlantic coast.

As such, it was a positive sign to see the CBC and the Calgary Herald report on former Alberta Premier Alison Redford’s recent appointment to lead a review of the oil sector in the former British colony, which sits between Venezuela and Suriname on the northeastern tip of South America. The industry friendly Redford will head a team of Canadian consultants to review Exxon Mobil’s massive planned project at the proposed Payara oil well that has been criticized for low royalty rates.

In February, the international NGO Global Witness published an explosive report, alleging that under Exxon’s lucrative oil deal, Guyana will lose out on up to $55 billion—money that “Guyanese people have said could be used to build much-needed roads, hospitals, schools, and sea defenses to protect the 90 percent of the population at risk from rising sea levels.”

Redford’s appointment as “Canadian Queen’s Counsel” is controversial in Guyana. One reason is that it’s unclear, reported Stabroek News, “whether this had been as a result of Ottawa’s funding of the process.”

There was also a Canadian angle to the previous government’s fall. An MP from the governing coalition with Canadian citizenship voted in favour of a no-confidence motion tabled by the opposition. The next day he fled to Toronto, claiming to have received death threats for voting against his own government.

Unbeknownst to many, Canadian influence in Guyana is long-standing. In the early 1900s, official Canadian policy supported annexing the British Empire’s Caribbean possessions (the various islands as well as British Honduras and Guyana). Despite failing to take over the country, Canada has had significant influence there. The Royal Bank of Canada and the Bank of Montréal both began operating in the country more than a century ago. At that time, a syndicate led by Canadian railway tycoon William Cornelius Van Horne built Georgetown’s electric lighting and trolley system with $600,000 from the Bank of Montréal. For its part, the Royal Bank helped US-based Alcoa (the world’s eighth largest producer of aluminum) develop its Guyanese bauxite operations in 1909.

Beyond the economic sphere, Canada has long trained Guyana’s military. From 1942 to 1945, Canada garrisoned a company of soldiers and a naval ship in the country. Pressure from Montréal-based Alcan, which inherited Alcoa’s operations, played a central role in Ottawa’s decision to send troops to Guyana even though the official request came from London. In January 1942 Alcan’s Ottawa office director, Fraser Bruce, wrote to Canada’s Department of External Affairs that “responsible company officials at McKenzie will not feel satisfied with respect to the guarding of the works until imperial or Canadian troops are stationed there.” In a follow-up letter he bluntly referred to “our recent request for white soldiers.” The official request from London made clear the racial nature of Canada’s mission. “Local coloured guards are already provided on the ships, but United Kingdom authorities recognize that there would be an advantage if these guards could be strengthened by a small number of whites and NCOs [non-commissioned officers].”

Alcan was closely enmeshed with colonial policy until Britain lost control over Guyana in 1966. The company, notes The Caribbean Basin: An International History, “thought that because of its contribution to the colonial economy, one of its officials ought to have a seat on the legislative council.” In the early 1950s, “Alcan repeatedly informed Governor [Sir Alfred] Savage of its disappointment that he was not appointing any of its people, and Alcan officers thought that governor Savage himself was far too leftist, far too sympathetic to unions and socialists, to be kept in his job by a [British] Conservative government.”

On occasion, Alcan personnel directly enabled Britain’s occupation. When anti-colonial upheaval swept the country in 1953 (Guyana was a pseudo colony at the time) the British governor made prominent foreigners special constables, including Charles K. Ward, then public relations officer for Alcan’s Guyanese subsidiary and a former Royal Canadian Navy officer. As one of the few naval officers in the colony, Ward was summoned to serve as liaison with the Royal Navy. “Other Alcan personnel,” writes Duncan C. Campbell in Global Mission: The Story of Alcan, “were required to patrol the dark city streets by night to guard against troubles.”

As Guyana’s leading trade partner for many years, Canada benefited from the unequal international division of labour created by colonialism. Guyana’s bauxite industry provides a stark example of this inequity. In 1970 the price per ton of bauxite ore was G$18, G$160 for alumina and G$1,000 for aluminum ingot. According to former Guyanese politician and judge Mohamed Shahabuddeen, author of The Nationalisation of Guyana’s Bauxite: the Case of Alcan, “[with] the smelting and semi-fabrication stages being in Canada, the result was that Guyana would obtain royalties and taxes on G$72, being the value of four tons of bauxite, while Canada would derive benefit from G$1,000, being the value of the equivalent of one ton of aluminum ingot.”

While Guyana lost the value-added components of the aluminum smelting process to Canada its workforce fell victim to some of the most negative aspects of aluminum production. The home of Alcan’s mine, MacKenzie, was the worst sort of company town. Well into the 1960s “the workers live[d] in a depressed slum area to the north called, ‘the village.’ Staff members live[d] in the plush area of Waatooka, with exclusive clubs and social amenities such as a golf club.” Those not living in the town needed to present passes to enter MacKenzie.

RELATED CONTENT: Venezuela Presents a Proposal to the UN for Agreement with Guyana in Essequibo Dispute

Alcan’s operations didn’t escape the notice of social justice activists. The Student Society of the University of Guyana organized a demonstration in May 1966 in front of Alcan’s office and the Canadian High Commission (as well as a Royal Bank office). The African Society for Cultural Relations with Independent Africa (ASCRIA), an Afro-Guyanese grassroots organization and the country’s foremost black nationalist movement, explained:

They [the workers] have, until recently, been bound to live in the most stratified community in Guyana, with its South African and USA idea of neighbourhood living and of white supremacy. The physical arrangements were such also that the whole imperialist machinery could be clearly seen: the extraction of the ore, the processing and added value, the shipping away of wealth, the importation of raw chemicals, the small group of expatriate decision-makers, the tokenism, the social gaps, the misery of the poorer districts, the hilltop luxury of the white population, the buying out of leaders, the divide and rule tactics, the process of exploitation which they could feel in their skin.

From the early 1980s, too, Canada pushed for neoliberal economic restructuring in Guyana. The Canadian International Development Agency (CIDA) was involved in Guyana’s first structural adjustment loan from the World Bank designed “to turn over significant sectors of the economy to the private sector, both local and foreign.” A 1982 Globe and Mail article added, “the government denies that the program exists but copies of the agreement are widely circulated in Georgetown… They [Canadian officials] are reluctant to discuss the effort to impose conditions, however, since it is apparently CIDA’s first foray into this sensitive area of internal economics.”

After refusing to expand this initial structural adjustment program, Guyana was blacklisted by international financial institutions in the mid-1980s. At the same time, Canadian bilateral assistance declined from $3.15 million in 1983-84 to $700,000 in 1985-86. By the late 1980s pressure from Ottawa and global financial players was mounting on Guyana to adopt a series of more drastic economic reforms. Ottawa chaired the Guyana Support Group and gave $60 million to a highly controversial structural adjustment program led by the International Monetary Fund (IMF). The value of the Guyanese dollar subsequently fell from $10 to US$1 in 1988 to $144 to US$1 in 1995.

What’s more, Canadian money was tied to Guyana’s adherence to IMF macroeconomic prescriptions. Frank Jackman, the Canadian High Commissioner to Guyana, said “there is great admiration within the government of Canada for the steps that are being taken here, and for the budgetary moves, albeit unpopular, that have been introduced.” Jackman claimed Guyana was setting a “precedent” for other indebted Third World countries and told the Guyanese to “take heart” since the austerity package would encourage Canadian investments. The people failed to “take heart” and instead demonstrators threw stones at the Canadian high commission office.

After the structural adjustment programs in the 1980s some Canadian investment did flow into Guyana. Part of this foreign investment led to a terrible tragedy. In August 1995 the tailings dam at Québec-based Cambior’s Omai gold mine in Guyana failed. More than 1.2 billion litres of cyanide-laced sludge spilled into the Essequibo River, the country’s main waterway. Huge numbers of fish were killed and thousands of riverbank inhabitants temporarily lost their livelihood. The area was subsequently declared a disaster zone. To sidestep possible legal claims stemming from the spill the company paid off local fisherman. In November 1998, This Magazine reported:

The fishermen, who were mostly illiterate, were required to sign forms absolving Omai of any future claims in exchange for $1.50 each. About two weeks later, it was reported that [Canadian High Commissioner] Louis Gignac had pressured Guyanese Prime Minister Samuel Hinds to reduce the scope and duration of the government-sponsored commission of inquiry investigating the spill. In a closed-door meeting on September 8 in Georgetown, and later in a follow up letter leaked to the [Montréal] Gazette, he urged the Prime Minister to limit expert testimony and wrap up the inquiry in thirty days.

Canadians who want their country to be a force for good in the world need to pay more attention to Ottawa’s influence in this small South American nation. We must hold our corporations, politicians and diplomats accountable to the standards we demand inside Canada, at the very least.

Featured image:  Components of a wheel excavator used to move sand onto conveyor belts at one of Alcan’s bauxite mines near MacKenzie, British Guyana. Photo by Henry Hamilton/Flickr.