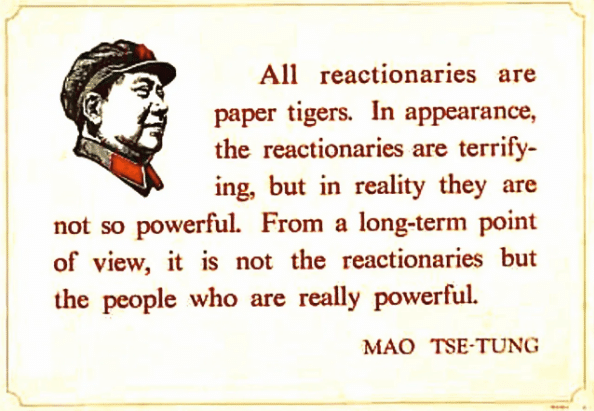 You look around today’s United States, and you find yourself surrounded by projections of the capitalist state’s repressive power. There are militarized police, made highly equipped after being funneled excess army equipment amid the wars of the last two decades. There’s a surveillance state that monitors everyone, all with the help of the tech companies that have deeply integrated themselves into our daily lives. There are right-wing militias that are intertwined with the state. There’s a Homeland Security department that this year used Gestapo-style tactics to detain protesters, and that’s been helped by a military that can be sent into the streets to suppress demonstrations.

As our class conflict escalates, so will the level of violence that the state is willing to use. In 1985, the U.S. government bombed an entire Philadelphia neighborhood to counter a black liberation group. At some point in the coming decades, it will likely do this again, as well as send in special operations forces to go after the centers of socialist and anti-colonial resistance. But when you look past the grand, imposing nature of the repressive institutions and the surveillance state, you begin to notice some flaws in their abilities to defend against a class uprising. And before you know it, you’ll discover proof that the government we live under isn’t any more invincible than the governments which revolutionaries like Mao and Castro defeated.

Castro himself pointed out this hidden reality about the supposedly unbeatable nature of the modern capitalist states, concluding that “They have tried to establish the myth that modern arms render the people helpless in overthrowing tyrants. Military parades and the pompous display of machines of war are used to perpetuate this myth and to create a complex of absolute impotence in the people. But no weaponry, no violence can vanquish the people once they are determined to win their rights.”

Che Guevara spoke more directly to those who live under the rule of the United States, having said to us: “I envy you. You North Americans are very lucky. You are fighting the most important fight of all—you live in the belly of the beast.” How are we to fulfill Che’s vision for the U.S. government being overthrown, and for the proletariat building its own democratic state structure on a post-colonial continent? By studying the U.S. state’s strategic weaknesses and preparing to exploit them.

Those weaknesses lie within the scary-sounding tactic that I’ve already mentioned the U.S. military plans to engage in when the class uprising begins: sending in special ops forces. In 2016, the Joint Special Operations University revealed this to be the military’s primary planned strategy for suppressing an internal uprising in a training video which admitted that “We are facing a threat that requires us to redefine doctrine and the force in radically new and different ways.” This was in response to the realities exposed by a separate U.S. Army study from that year, which bemoaned that the “U.S. Army is incapable of operating within the megacity.” This confirmed a 2014 study which observed that “the Army is currently unprepared. Although the Army has a long history of urban fighting, it has never dealt with an environment so complex and beyond the scope of its resources.”

Since the JSOU video painted a picture of a future where armed rebel forces who operate on the periphery of large cities will be subdued by military actions that hone in on selective areas, it’s clear that special ops is the strategy that the military’s analysts aim to lean on. And for understandable reasons; if the military were to carpet bomb a U.S. city, or carry out a full-scale invasion of a city, the upper classes in the city’s center would come under jeopardy and a major American economic center would be demolished. So the military wants to rectify this contradiction by employing some kind of new innovation in urban combat science to defeat the guerrillas without endangering the cities themselves.

But as Planet of Slums author Mike Davis said in response to the JSOU’s video:

This is a fantasy, the idea that there is a special military science of megacities. It’s simply not the case. … They seem to envision large cities with slum peripheries governed by antagonistic gangs, militias, or guerrilla movements that you can somehow fight using special ops methods. In truth, that’s pretty far-fetched. … You only have to watch ‘Black Hawk Down’ and scale that up to the kind of problems you would have if you were in Karachi, for example. You can do special ops on a small-scale basis, but it’s absurd to imagine it being effective as any kind of strategy for control of a megacity.

There’s the big disadvantage that the ruling class would have in the event of a class war: an inability to keep the downtown business operations running due to the vast complications which a guerrilla insurgency would immediately produce. The rich wouldn’t be able to carry on like usual in the center of these cities while the army conveniently wipes out the insurgents within the distant urban edges. The rich would have to leave for their rural doomsday shelters or flee the country. Plus, the flow of capital would be disrupted like never before. In near future-America, where escalating climate disasters, new pandemics, economic contractions, and general imperial decline will already be wreaking havoc on the functions of U.S. imperialism, such an armed internal revolt would put great amounts of stress on the U.S. military.

This is the worst-case scenario for the U.S. ruling class, a scenario where the proletarian revolutionary organizations have gained enough resources, numbers, and tact to wage an actual people’s war. Los Angeles, New York City, and Washington DC would be the most vulnerable, since they’re all megacities. In the country’s mountainous terrain, where it’s easy for guerrilla bands to hide, additional pieces of land would quickly become likely to be taken. The country would become a patchwork of strongholds for the revolutionaries and the reactionaries, with the reactionaries coming up against unexpected strategic disadvantages that could very well result in early losses of important military resources; there are ten military bases in Washington DC, along with a nuclear weapons facility. How the tables would begin to turn if the United States were to lose control over this megacity.

The government will do all it can to prevent this outcome from being realized-from carrying out mass pre-emptive arrests of revolutionaries, to trying to massacre the first Red bases, to bulldozing and bombing the impoverished neighborhoods where guerrillas might pop up, to waging economic warfare against the marginalized groups who are likely to participate in an uprising. But all of these things are to be expected, and they’re what we need to prepare for to survive. Gather seeds and create homesteads in your area so that you won’t starve during a blockade. Attain radio-based communications equipment for a scenario where the government shuts off the internet in your area. Gather the materials you would need to camp in the wilderness for extended periods of time should you need to retreat to a place where the government can’t find you. Get all the weapons, armor, medical supplies, exercise, and martial arts training that you’ll need to match the combat abilities of the police and U.S. army personnel.

Prepare for a violent response from the state to come your way. Prepare to potentially go off the grid. Prepare for a moment where you’ll have to jump ship on the sinking Titanic of capitalism. If we reject the base assumptions of the existing system-that material possessions are crucial for personal fulfillment, that you’ll be able to get a good life through working for corporations, that what we’ve got now is the only thing that we can ever have-you’ll be able to free yourself from the complex of impotence and fight back. As Mao said: “Weapons are an important factor in war, but not the decisive factor; it is people, not things, that are decisive. The contest of strength is not only a contest of military and economic power, but also a contest of human power and morale. Military and economic power is necessarily wielded by people.”