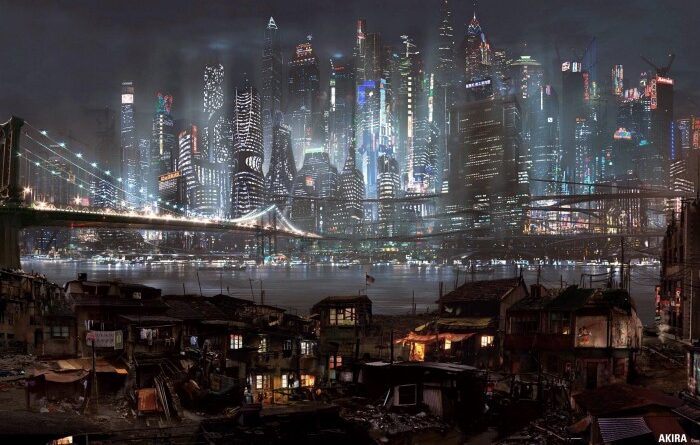 Being the core of global imperialism, the United States has naturally created a decadent lifestyle for its most favored citizens. During the post-World War II era, those who benefited from the vast buildup of imperialist wealth were given access to many leisure activities and fancy new products, made easily available to the late 20th century’s growing managerial class. But after half a century of neoliberal economic destruction and a pandemic that’s compounded the worst depression in a century, the country’s air of luxury is an illusion that corporate propagandists are growing desperate to perpetuate.

The U.S. still receives wealth from its global neo-colonies. But for the majority of its population, this doesn’t translate to meaningful material benefits, let alone to the enormous and spectacularly outfitted homes that the upper middle class families in TV shows are overwhelmingly shown to have. The gap between how Americans are supposed to be living and how we’re actually living keeps growing, with the worst aspects of our poverty crisis being pushed ever towards the margins of mainstream consciousness. The U.S. truly is a third world country with a Gucci belt, where an illusion of a more prosperous past is subconsciously maintained.

The more that the hunger rate increases, unemployment rises, businesses close, and wages and social services get slashed, the more dramatic this dissonance becomes. We’ve gotten to a point where the metropolitan elites and their representatives in the incoming Biden administration aim to embark on an unprecedented project of technological expansion, all while child hunger has increased by fourteen times among the lower classes in the last year. One recalls this quote from Phillip Neel’s 2018 book Hinterland: America’s New Landscape of Class and Conflict:

In Nevada I could feel the Long Crisis with a terrifying intimacy, as if it was some sort of uncanny, bodily contact — like the feeling you get camped out in the swirling, galaxy-littered darkness of the open range when a reptile brushes up against your prostrate body. Except that the reptile at least shares with you some deep, serpentine connection, a lineage lost somewhere in the plummet of primeval time. The Crisis, on the other hand, is a vast creature, not contained by familiar scales of time or space. It is a social terror made of masses of machinery and animals, yet not in any way kin to these components. And what we sense of it today is merely one of its many limbs extending backward from its true body writhing somewhere just out of sight, at home in our own incomprehensible future.

With Covid-19, the future he was talking about has come. In the face of this incomprehensibility, of this unfolding late-stage capitalist nightmare that we’re conditioned not to truly acknowledge as real, the system can only respond with a campaign of denial. Our civilization can’t be in decline, say the liberal elites who have such optimism for the next four years; we must be on the verge of a great new breakthrough. New technologies are about to be normalized, ones that will make everyone’s lives better and kickstart the economy and save the planet. These are the marketing points of the “Great Reset” that tech companies and think tanks have been pushing.

At least part of this comes from a desire, amid our imperial decline, to measure up to what China has already accomplished. China just eliminated absolute poverty a month before its self-imposed deadline, it’s effectively beaten Covid-19, and it’s leading the world in the fight against global warming. It’s also pumping more than a trillion dollars into its economy to proliferate artificial intelligence, wireless networks, and other advancements. This has made it so that technologically competing with China is indeed one of the main arguments that the D.C. think tanks have been making for what they call the “fourth industrial revolution,” where the high-tech sector is heavily integrated into U.S. capitalism. They don’t just want to geopolitically strong-arm China, they want to surpass China in its uses of technology to gain internal economic growth.

What these liberal technocrats aren’t going to acknowledge is that 21st century U.S. capitalism, by its nature, can’t restore its own vitality when faced with a crisis like this one. The rate of profits has declined so much that in order for the capitalist class to keep building up their wealth, by necessity they’ll need to continue the process of neoliberal austerity. Biden’s team has as much as admitted this. An economy that’s designed to only keep widening its wealth gap won’t produce what China has created. It will produce the hellscape of an impoverished, violence-ridden dictatorship, like the one of Honduras in the aftermath of the country’s U.S.-orchestrated coup.

Since the U.S. is still an oppressor country, and will remain so until a revolution occurs within it, this descent into necro-politics will be accompanied by an ongoing veneer of imperialist decadence and luxury. The rich metropolitan areas will be outfitted with all the conveniences which Silicon Valley elites aim to proliferate-fully automated cars, artificial intelligence as a greater driver of computing, an internet of things, a total replacement of retail with home delivery-while the Hinterland continues to deteriorate. None of it will change the nature of technology under capitalism that Michael Parenti observed in Against Empire: “The essence of capitalism is to turn nature into commodities and commodities into capital. The live green earth is transformed into dead gold bricks, with luxury items for the few and toxic slag heaps for the many. The glittering mansion overlooks a vast sprawl of shanty towns, wherein a desperate, demoralized humanity is kept in line with drugs, television, and armed force.”

As socialist China’s success story has shown, the problem isn’t technology, the problem is capitalism. Whether a technological advancement leads to good or evil depends on the class character of the institutions that get to wield this technology. As the United States gets access to the technologies which the progenitors of the “fourth industrial revolution” are pushing for, it’s using them to make the lives of the elites more decadent while making the lives of the poor overall worse.

Whatever benefits we’ll get from the normalization of the proposed “smart cities” will also come with more intensive government surveillance which is assisted by AI, greater potential by unaccountable corporations to censor political speech, deadlier equipment for the militarized police, and-in the longer term-more ways for capitalism to destroy the environment and put us in peril. The technological innovations that capitalism plans to embrace will ultimately exacerbate rather than alleviate its contradictions.