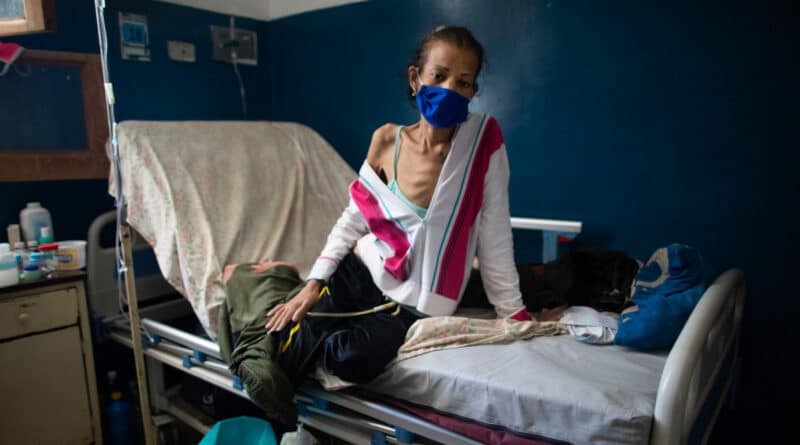 The new sanctions come even as an estimated 100,000 people have been killed by American sanctions in Venezuela alone as vital medical equipment and lifesaving drugs have been blocked from entering the country.

On its way out the door, the Trump administration is ramping up another round of aggressive, punishing sanctions against a host of countries. On Friday, the State Department announced new sanctions against Iran, the People’s Republic of China, and Venezuela. And today, it tightened the grip of the decades-long blockade on Cuba and increased sanctions on Nicaragua.

In the case of Iran, the measures were aimed at its oil industry and went so far as to sanction Vietnamese companies helping with the international supply of Iranian hydrocarbons. “Today, thanks to the success of our sanctions, Iran is looking to come back to the negotiating table to get relief,” Trump’s Special Representative for Iran and Venezuela, Elliott Abrams, asserted, adding (falsely) that the Iranian nuclear program remains focused on weaponry, not civilian usage.

Secretary of State Mike Pompeo also announced that 59 Chinese entities that were “undermining our national security and foreign policy interests” have been targeted. In the case of Venezuela, the action came as retaliation after it held an election the United States deemed to be fraudulent.

The Trump administration has ramped up the use of sanctions, issuing around 3,800 new ones, compared to 2,350 in President Obama’s second term. Sanctions are an act of war, and, when applied unilaterally, are often seen as illegal. The UN has formally denounced many of the U.S. sanctions, noting that they “disproportionately affect the poor and most vulnerable classes,” and not the leaders of foreign governments as is sometimes argued.

The effect on Iran has been to essentially tank its economy and cause untold hardship on its people. Oil production has sputtered. The Iranian rial has lost the majority of its worth. Food and consumer goods have become scarce and far more expensive, and international travel is now much harder. Throughout 2020, the U.S. has hindered the import of humanitarian aid and personal protective equipment, adding to the COVID-19 epidemic inside the country. The National Iranian American Council (no lovers of the current administration in Tehran) described U.S. actions as “heartless and sadistic.” Seyed Mohammad Marandi, Professor of English Literature at the University of Tehran agreed, telling MintPress in October that, “The sanctions deliberately target ordinary Iranians, women, and children…They are designed to kill hospital patients and to create poverty. They have had partial success.”

The effect on Venezuela has been if anything, more acute. An estimated 100,000 people have been killed by American sanctions (a fact barely reported in the West), as vital medical equipment and lifesaving drugs have been blocked from entering the country. Alfred de Zayas, an (American) UN Special Rapporteur visited Venezuela, comparing life there to living under a Medieval siege, and declaring the United States as guilty of “crimes against humanity.”

There appears little hope for a major change in tactics with the incoming administration. A Biden-linked Washington think-tank recently released a report calling for more “innovative” use of what it called “coercive economic statecraft,” (i.e. sanctions). The Center for a New American Security was founded by Michelle Flournoy, Biden’s original pick for Defense Secretary, and is full of Obama-era officials like Victoria Nuland. “The use of economic power, backed up by all of the available legal tools, plays to America’s strengths as the dominant global economic power and promises a continued stream of benefits,” they argue, concluding that, “Although there are inevitably going to be costs, and possibly increasing ones, associated with the use of coercive economic tools, the benefits are also going to increase over time.”

News agency Reuters also recently released a report based on conversations with people close to the 78-year-old former vice-president, noting that sanctions will “remain a central instrument of U.S. power” under his administration, suggesting that he will likely ramp up sanctions against Russia. Far from dropping the practice, Biden’s major challenge, according to those cited, will be “to sort out which sanctions to keep, which to undo and which to expand.” It appears it will continue to be full steam ahead for America’s sanctions regime in 2021.