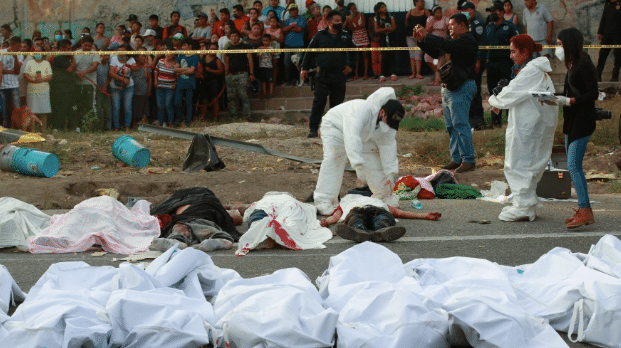 On December 9, 2021, a truck carrying approximately 166 people crashed in Chiapas, Mexico – a main transit point for migrants and asylum seekers trying to reach the US – killing 54 people and injuring 58 others. The horrendousness of this event is underlined by the scene of a tear-stained man saying to a dying friend: “Don’t go to sleep, don’t close your eyes. Remember what you promised your mother. Hold on!” This is the single deadliest incident for migrants in Mexico since at least 2014, when International Organization for Migration (IOM) began documenting deaths.

651 people died this year attempting to cross Mexico’s border with the US, more than in any year since 2014. These gruesome incidents are rooted in the barbarity of the present-day conjuncture. A report by the United Nations Children’s Fund (UNICEF) notes: “Prior to the coronavirus disease 2019 (COVID-19) pandemic, Mexico and countries in Central America were facing significant humanitarian needs related to migration flows, violence, internal displacement, food insecurity and poverty. The pandemic could push 10 million additional people into poverty, leaving millions of children dependent on humanitarian assistance.”

The Coronavirus crisis has merely aggravated the inhumane realities that have underlain the historical oppression of Central American countries. Pulled along the Spanish slipstream of conquests, these regions witnessed the enslavement, slaughter and denigration of indigenous people. After independence in the early 1800s, the domestic elites built an export economy based on coffee and bananas, displacing peasants from their land and forcing them into plantation labor; this period has been labeled by many as the “second conquest”.

By the late 19th century, neo-colonialism had spread its tentacles around Central America – the countries’ economies had started revolving around the imperial dynamics of the incipient American empire. Local resistance was widespread. In Nicaragua, Augusto César Sandino headed a peasant movement against US occupiers. In Guatemala, a leftist government attempted to change the country’s land and labor systems from 1944 to 1954. In El Salvador, Farabundo Martí politicized urban workers at the same time as indigenous peasants in the coffee-growing areas took up arms to regain control of their villages.

The comprador bourgeoisie responded to popular movements by taking recourse to military rule – a murderous tactic which would eventually result in civil wars in Guatemala (1960-1996), El Salvador (1980-1992) and Nicaragua (1979-1990). USA acted as a key player in these conflicts, backing military dictatorships and supporting them with logistical aid, money, training and weapons, even as many of them committed human rights atrocities. These managed instabilities tore apart everyday life, provoking emigration from Central America.

However, the imperialists learned no lessons from the disastrous consequences of interventionism. In June 2009, Honduras’ social democratic President Manuel Zelaya was unconstitutionally overthrown by the military; the US gave imprimatur to this anti-democratic by continuing to supply aid to the country. This coup was carried out against a definite background – neoliberalism’s war against the masses. An end to political violence gave way to the rule of international financial institutions, the World Bank, the Inter-American Development Bank, donor nations, and nongovernmental organizations (NGOs).

These entities enervated Central American sovereignty to promote free markets. In order to attract investment or receive international loans from these groups, Central American governments had to create a “favorable investment climate” – a polite term for the reduction of wages and taxes and loosening of environmental regulations. Free trade agreements are the face of the globalized corporate assault on the Central American people. In 2004, former US President George W. Bush signed the Central America Free Trade Agreement (CAFTA), to which the Dominican Republic was later added.

While the agreement promised jobs and prosperity, till now it has only worsened inequality, destroyed jobs, weakened labor rights, and diverted money from social welfare programs. New economic activities – exploitative and informal in nature – have flourished: maquiladoras, tourism, nontraditional agricultural exports, and mining. This has been accompanied by the expansion of international drug trade, and the growth in remittances, and the banking and financial sector. All these forms of economic distortions have contributed to the growing absence of the administration – a vacuum which has been filled by cartels.

Murder rates have climbed sharply, affecting mainly the working class. Poor people – particularly women, queer and trans folk, youth, and children – have fled in large numbers, seeking asylum in the US and Mexico. The recent death of migrants in southern Mexico is part of this flood of out-migration – engendered by the structural problems of dependency which foster inequality, corruption, and violence. To put a clear end to the dehumanizing experience of migration which dominates contemporary Central America, we need to frontally confront the power of imperialism.

“The violence and poverty that afflicts Central America today is a direct result of colonial and neocolonial development policies and the cultures of violence and forgetting needed to implement and justify them. If we want to create a more just world, we need to acknowledge the many layers of complicity and forgetting that underlie today’s inequalities. We also need to remember and be inspired by Central Americans’ valiant struggles for social and economic justice. The United States owes a huge moral and material debt to Central America. Remembering this debt is the first step toward trying to repay it. Reparations means much more than mere cash transfers. Reparations means repairing the damage caused by centuries of domination, extraction, and exploitation.”

Featured image: Bodies in bodybags are placed on the side of the road after an accident in Tuxtla Gutierrez, Chiapas state, Mexico, Dec. 9, 2021. Mexican authorities say at least 49 people were killed and dozens more injured when a cargo truck carrying Central American migrants rolled over on a highway in southern Mexico. (AP Photo )