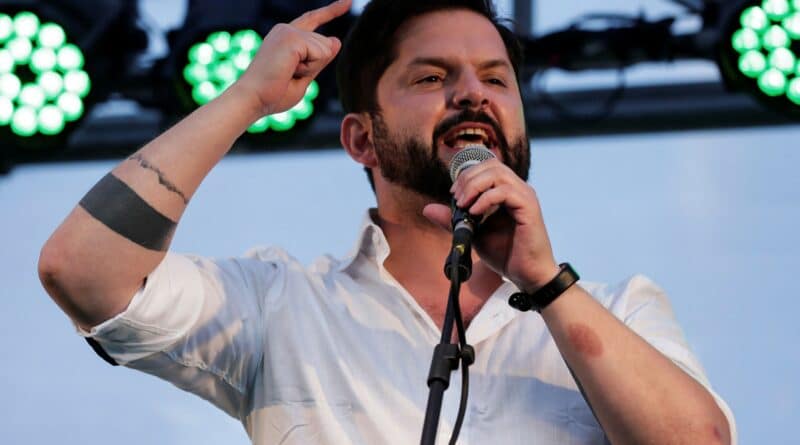 From Venezuela to Chile, from Caldera to Boric

The current situation in Chile seems to me more and more strikingly similar to that of the early 90’s in Venezuela. At that time, here—just as in Chile today—30 years of post-dictatorship were being experienced. Both countries—at the time—were presented as a “model of democracy to follow” and “example for the world” based on the “success” of the two-party representative democracy system in which the economy was put at the service of a minority of the population.

“It is not thirty pesos, it is thirty years” could have been the cry of the tens of thousands of demonstrators who participated in the Caracazo of February 27 and 28, 1989, a popular protest movement which was a massive expression of the rejection of the neoliberal measures implemented by President Carlos Andrés Pérez. In the world’s fifth largest oil producer and exporter, there was 51% poverty. The fate of Pérez (a stubbornly corrupt man, as was demonstrated a few years later) and that of the false democracy were sealed forever. Thousands of dead and hundreds who remain disappeared until today—were the government’s response to the popular mobilization.

But the two situations also have differences, one of them highly relevant. In Venezuela, faced with the massive clamor of the citizenry and the reprobation of the system in the face of the inactivity, passivity and complicity of the politicians, a group of patriotic military people, attentive to the situation, produced two uprisings during 1992 to show their support for the popular sentiment. The first one, carried out on February 4 under the leadership of Hugo Chávez Frías, an unknown lieutenant colonel of the Special Forces, raised the spirit of struggle and pointed out a different path, and this placed Chávez on the pedestal of future battles to come. As never before in the history of Venezuela, a leader assumed responsibility for a failure, but this time, the defeat “for now” of the movement gave a victory course to that day.

Chávez and his comrades were sent to prison. In the afternoon of the same day, in a special meeting of the Congress, former President Rafael Caldera emerged from the shadows and, with the opportunism of any despicable traditional politician, and using a vibrant speech in which he called to review the true causes of the uprising, he took over the protagonism of the movement that had shaken Venezuelan society to its foundations. Two years later, Caldera was elected president of Venezuela.

The similarity of the situations of Venezuela in the ’90s and present-day Chile is evident because in Chile, starting from October 18, 2019—as in Venezuela during the Caracazo—the country was shaken by a great popular movement of repudiation against the neoliberal system that continued the dictatorship. The massive October protest in Chile was an expression of the feelings of a people tired after 30 years of exclusion and impoverishment, particularly of the poorest sectors of the population. President Piñera’s response—just like that of Carlos Andrés Pérez 30 years ago—was a brutal repression with the aggravating factor of a new technique whereby police forces shot at the eyes to blind the demonstrators, thus exposing a novel attribute of representative democracy.

It is worth saying that the bullets succeeded in taking away the sight of the protesters whose eyes were wounded, but they could not take away their political vision, the fighting spirit and the pure soul of the majority, as demonstrated by Senator Fabiola Campillai, elected with the highest majority in Santiago, who lost her sight due to the murderous repression of Piñera and representative democracy.

When the protests were at their zenith and Piñera was staggering, when the people had decided to carry out their movement to the last consequences in the face of the “inactivity, passivity and complicity of the politicians,” appeared the Rafael Caldera of the 21st century, Gabriel Boric, like a phoenix to save his colleague Sebastián Piñera in the same way that the latter—in the safety of representative democracy—had run to London to express his support to Pinochet who had been detained for human rights violations during the dictatorship. Thus one “savior” saved another “savior.”

The pact of the political elites of November 15, 2019, largely paralyzed the Chilean protests, and Gabriel Boric emerged as the main protagonist of the salvation of the system so that two years later—just like Caldera—he could be elected president or at least, be a strong candidate to be president when I write these lines.

In 1994, Caldera was considered the “lesser evil” in the face of the neoliberal onslaught in Venezuela. A large number of forces came to support him, including the Communist Party of Venezuela (PCV) that supported him instead of the candidate who at that time represented the left. Thus, the “fluke” came to pass; the communists were in government for the first time since the beginning of representative democracy in 1958. A former guerrilla fighter, Teodoro Petkoff (like a Carlos Ominami), ultra-leftist turned neoliberal, became minister of Planning, privatizing everything that could be privatized, including the Venezuelan aviation company (VIASA), leaving all workers unemployed except one: Petkoff’s son.

Thus, the “fluke” left became neoliberal and promoter of privatization, to such an extent that the PCV was forced to leave the government after the “deception” of Caldera, who did the opposite of what had been agreed upon, in order to distance himself from the government of Carlos Andreés Pérez. On the contrary, Caldera’s administration was one of profound neoliberal continuity.

I did not vote for Caldera, I did not accept the “lesser evil,” and preferred to wait for a better situation at a time when Comandante Chávez and his comrades were still in prison. Chávez was released from prison in 1994 and went throughout Venezuela, explaining his project for the country. The Caracazo of 1989, which had continued well into 1992, had given birth to a new leader.

In the 1998 electoral campaign, Chávez called on the people of Venezuela to participate in building a different country through the approval of a new Constitution to be drafted by genuine representatives of the people and endorsed by them in a constituent referendum. The people believed in Chávez and elected him president with 56.5% of the votes. The people thus had regained their worth, Chávez rescued the people’s power and gave it all the significance it should have in a true democracy. Therefore, in Venezuela, democracy, besides being representative, is equally participative and enjoys the protagonism of the people by mandate of the Constitution, approved on December 15, 1999. Of course, the process is imperfect, it has many problems because it is a model under construction that is suffering the incessant siege, intervention and interference of the US and European imperial powers.

But in 1998 it was worth it not to have surrendered to the “lesser evil” of 1994. That same deception has cost Chile 32 years of dictatorial continuity to which another five years could be added, if the Constitutional Convention cannot put a stop to it, at least partially. The theory of “lesser evil” is what brought Biden to the presidency of the United States and we have all seen the results. I do not doubt that for the people of the United States the Democrats represent a different expectation from the Republicans. Similarly, I do not question that for the Chilean people, Boric offers a different option in comparison to Kast. But in terms of foreign policy, both promise the same thing: to continue to keep Chile as a privileged ally of the United States, particularly in its attempts to overthrow the governments of Cuba, Nicaragua and Venezuela. Both Boric and Kast —equally—characterize the governments of these countries as dictatorships.

The Chilean “lesser evil” for Venezuela has extended even to international organizations. Mrs. Bachelet, the superlative expression of that “lesser evil,” continues to be an expression of the imperial policy based on biased reports on Venezuela that relay the policies designed in Washington and with which she fully complies.

I am Chilean and Venezuelan. I sincerely respect all my friends in Chile who are going to vote for Boric; but I live in Venezuela, I cannot vote for someone who has assumed himself as an enemy of the country and who advocates the overthrow of its government. I have to think about the country, but above all about the future of my family and my son.

The concertacionista entourage of socialists, populists and Christian democrats that has recently become close to Boric to build its policy, foresees a new Petkoff leading the economy. They will marginalize the Communist Party of Chile until it is forced—if they are consistent with their history—to leave the government. It is only desirable that with Boric, the same thing does not happen to the communists as with González Videla during the 40’s of the last century, whom they helped elect and who, once in government, persecuted, relegated and repressed them

For the time being, it is also desirable that the Constitutional Convention, despite not being a constituent body, be capable of generating a new institutional framework that sweeps away the current one inherited from the dictatorship and that Chileans have a new option in which they are not forced to opt for the lesser evil. I have full confidence that through popular wisdom a new leadership will emerge that will bring a new president who will be a faithful representative of the people’s interests.

Until that moment arrives, in this 2021 in Chile, as in 1993 in Venezuela, I will not vote. I will hope that Chile will also have a luminous 1998 that will allow “opening the great avenues through which the free man will pass to build a better society” as President Salvador Allende, the only true Savior that Chile has had in its recent history, said.

Featured image: Gabriel Boric, the “leftist” candidate in the presidential election of Chile, whose foreign policy is entirely aligned with the US empire. File photo.