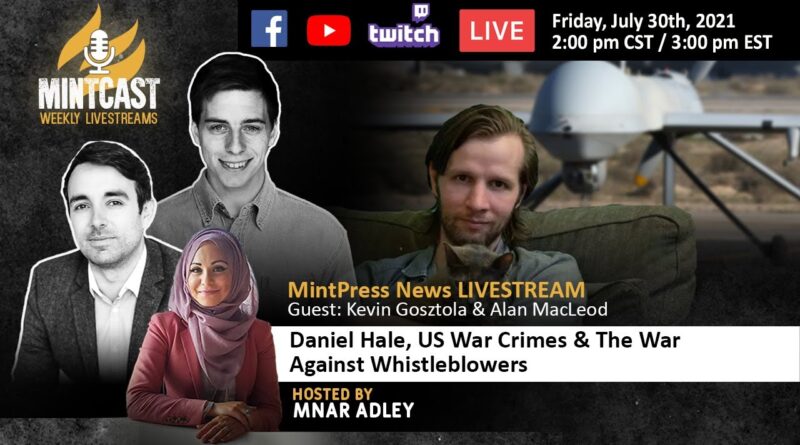 “U.S. prosecutors didn’t get what they wanted in their vindictive Espionage Act prosecution against Daniel Hale. They wanted 9 years in prison, especially since he succeeded in convincing many he is a conscientious soul. But 45 months is still 45 months too many.” — Kevin Gosztola, “Shadowproof”

Earlier this week, drone whistleblower Daniel Hale was sentenced to 45 months in federal prison as punishment for leaking documents that revealed the extent of U.S. war crimes in Afghanistan.

Hale, a 33-year-old resident of Nashville, Tennessee was employed as an Air Force signals intelligence analyst between 2009 and 2013. In 2012, he was deployed to Bagram Air Base in Afghanistan, where he tracked the cellphone locations of those designated by the United States as “enemy combatants” or “terrorists.”

“U.S. prosecutors didn’t get what they wanted in their vindictive Espionage Act prosecution against Daniel Hale. They wanted 9 years in prison, especially since he succeeded in convincing many he is a conscientious soul. But 45 months is still 45 months too many,” said Kevin Gosztola, managing editor of investigative journalism website Shadowproof.

“The U.S. government punishes people who reveal war crimes (Chelsea Manning), object to torture (John Kiriakou), and expose drone killings (Daniel Hale). Yet those who authorize, encourage, or commit war crimes, torture, and targeted assassinations never have to fear an indictment,” he added. Kevin joined us on the Mintcast today for a frank discussion on the continuing bipartisan war on whistleblowers.

Kevin is managing editor of Shadowproof, an independent investigative outlet that focuses primarily on corruption and systematic abuses of power in government and in big business. Kevin has been following the Hale and Assange cases closely. His latest article, “Daniel Hale Receives 45-Month Sentence For Releasing Drone Documents,” can be found at The Dissenter, a Shadowproof project. He is also the co-host of the “Unauthorized Disclosure” podcast, alongside Rania Khalek.

In a continuation of the attack on truth tellers, former UK ambassador, Craig Murray, is now the first person in the last 70 years to be incarcerated in the UK over “media contempt” for writings on his blog post, setting a very dangerous precedent for freedom of speech and journalism.

Murray was found guilty earlier this year for his reporting on the 2020 trial of former Scottish First Minister Alex Salmond. Murray was accused of  publishing articles which “seriously impeded or prejudiced” Salmond’s trial by breaching contempt of court legislation “preventing the publication of the names and identity and any information likely to disclose the identity of the complainers” against Salmond. Salmond was acquitted on all 13 charges of sex offences, including attempted rape.

“His crime was telling the truth”
In 2014, Hale left the Air Force and joined the National Geospatial-Intelligence Agency. It was at this point that he began communicating with a journalist — widely reported to be The Intercept’s Jeremy Scahill — sharing documents with him that proved that the vast majority of the drone program’s victims were not military targets, but innocent civilians.

“His crime was telling this truth: 90% of those killed by U.S. drones are bystanders, not the intended targets. He should have been given a medal,” remarked fellow whistleblower Edward Snowden.

“[Hale] committed the offense [of bringing] attention to what he believed to be immoral government conduct committed under the cloak of secrecy and contrary to public statements of then-President [Barack] Obama regarding the alleged precision of the United States military’s drone program,” his defense attorneys, Todd Richman and Cadence Mertz, stated.

While Hale and other whistleblowers who exposed his administration’s crimes are jailed, Obama, who increased Bush’s drone regime tenfold, is not only free, but is currently planning a huge 60th birthday celebration at his mansion in the exclusive Massachusetts community of Martha’s Vineyard. “What a world” we live in, where this can happen, remarked Lebanese political commentator Sarah Abdallah.

Espionage in the news
It has been a busy month for news about tech and espionage. Last week, it was revealed that an Israeli company has been caught selling software to authoritarian regimes that have used it to surveil more than 50,000 people worldwide. That company is NSO, founded in 2010 by former members of Unit 8200, the Israeli military’s notorious intelligence squad. Their product is called Pegasus and it was sold to military, law enforcement and intelligence agencies in 40 countries, among them some of the world’s worst human rights-abusing governments. Yet Pegasus is merely the tip of the Israeli spying iceberg, according to a new MintPress report by Whitney Webb.

Meanwhile, the credibility of the United States’ case against WikiLeaks founder Julian Assange appears to be falling apart. The prosecution team from the Department of Justice was already heavily relying on testimony from a convicted paedophile and child molester, someone who has been medically diagnosed as a sociopath incapable of feeling remorse. But now Sigurdur Ingi Thordarson — often known as “Siggi the Hacker” — has admitted that his testimony about how Assange aided him in hacking official computers is entirely false. Despite this, the charade of prosecuting the Australian publisher appears to be continuing, thanks to the fact that the news elicited zero content in corporate media.

Mnar Muhawesh Adley is founder, CEO and editor in chief of MintPress News and executive director of Behind the Headlines.