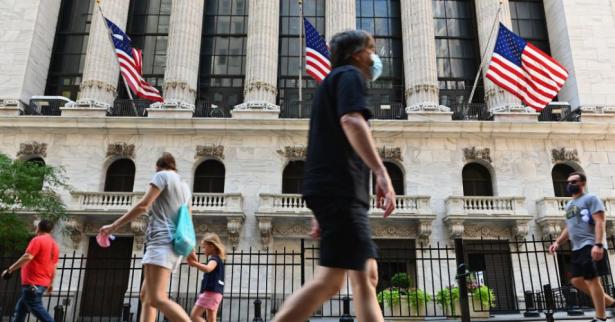 Ever since COVID-19 collided with the enormous bubble governments have been using to re-float the financial sector since 2008, booming equity markets became compatible with wholesale economic implosion. That became clear on August 12

On August 12, something extraordinary happened. The news broke that, in the first seven months of 2020, the United Kingdom’s economy had suffered its largest contraction ever (a drop in national income exceeding 20%). The London Stock Exchange reacted with a rise in the FTSE 100 by more than 2%. On the same day, when the United States was beginning to resemble a failed state, not merely a troubled economy, the S&P 500 hit a record high.

To be sure, financial markets have long rewarded misery-enhancing outcomes. Bad news for a firm’s workers—planned layoffs, for example—is often good news for its shareholders. But when the bad news engulfed most workers simultaneously, equity markets always fell, owing to the reasonable expectation that, as the population tightened its belt, all income, and thus average profits and dividends, would be squeezed. The logic of capitalism was not pretty, but it was comprehensible.

Not anymore. There is no capitalist logic to the developments that culminated on August 12. For the first time, a widespread expectation of diminished revenues and profits led to—or at least did not impede—a sustained buying frenzy in London and New York. And this is not because speculators are betting that the UK or the US economies have hit bottom, making this a great time to buy shares.

RELATED CONTENT: Unless you’re Working to Create a Dictatorship of the Proletariat, you Won’t Defeat Capitalism

No, for the first time in history, financiers actually don’t give a damn about the real economy. They can see that COVID-19 has put capitalism in suspended animation. They can see the disappearing profit margins. They can see the tsunami of poverty and its long-term effects on aggregate demand. And they can see how the pandemic is revealing and reinforcing deep pre-existing class and racial divisions.

“For the first time in history, financiers actually don’t give a damn about the real economy. “

Speculators see all this but deem it irrelevant. And they are not wrong. Ever since COVID-19 collided with the enormous bubble governments have been using to re-float the financial sector since 2008, booming equity markets became compatible with wholesale economic implosion. It was a historically significant moment, marking a subtle but discernible transition from capitalism to a peculiar type of post-capitalism.

But let us begin at the beginning.

Before capitalism, debt appeared at the very end of the economic cycle. Under feudalism, production came first. Peasants toiled in the lord’s fields, and distribution followed the harvest, with the sheriff collecting the lord’s share. Part of this share was then monetized when the lord sold it. Only then did debt emerge, when the lord would lend money to borrowers (often including the king).

Capitalism reversed the order. Once labor and land had been commodified, debt was necessary before production even began. Landless capitalists had to borrow to lease land, workers, and machines. The terms of these leases determined income distribution. Only then could production begin, yielding revenues whose residual was the capitalists’ profit. Thus, debt powered capitalism’s early promise. But it was not until the Second Industrial Revolution that capitalism could re-shape the world in its image.

Electromagnetism gave rise to the first networked companies, producing everything from power generation stations and the electricity grid to light bulbs for every room. These companies’ gargantuan funding needs begat the megabank, along with a remarkable capacity to create money out of thin air. The agglomeration of megafirms and megabanks created a Technostructure that usurped markets, democratic institutions, and the mass media, leading first to the Roaring Twenties, and then to the crash of 1929.

From 1933 to 1971, global capitalism was centrally planned under different iterations of the New Deal governance framework, including the war economy and the Bretton Woods system. As that framework was swept away in the mid-1970s, the Technostructure, cloaked in neoliberalism, recovered its powers. A 1920s-like spate of “irrational exuberance” followed, culminating in the 2008 global financial crisis.

To re-float the financial system, central banks channeled waves of dirt-cheap liquidity to the financial sector, in exchange for universal fiscal austerity that limited spending by lower- and middle-income households. Unable to profit from austerity-hit consumers, investors became dependent on central banks’ constant liquidity injections—an addiction with serious side effects for capitalism itself.

Consider the following chain reaction: The European Central Bank extends new liquidity to Deutsche Bank at almost zero interest. To profit from it, Deutsche Bank must lend it on, though not to the “little people” whose diminished circumstances have weakened their repayment ability. So, it lends to, say, Volkswagen, which is already awash with savings because its executives, fearing insufficient demand for new, high-quality electric cars, postponed crucial investments in new technologies and well-paying jobs. Even though Volkswagen’s bosses do not need the extra cash, Deutsche Bank offers them such a low interest rate that they take it and immediately use it to buy Volkswagen shares. Naturally, the share price skyrockets and, with it, the Volkswagen executives’ bonuses (which are linked to the company’s market capitalization).

From 2009 to 2020, such practices helped prize stock prices away from the real economy, resulting in widespread corporate zombification. This was the state capitalism was in when COVID-19 arrived. By hitting consumption and production simultaneously, the pandemic forced governments to replace incomes at a time when the real economy had the least capacity adequately to invest in the generation of non-financial wealth. As a result, central banks were called upon to boost even more magnificently the debt bubble that had already zombified the corporations.

The pandemic has reinforced that which has been undermining the foundation of capitalism since 2008: the link between profit and capital accumulation. The current crisis has revealed a post-capitalist economy in which the markets for real goods and services no longer coordinate economic decision-making, the current Technostructure (comprising Big Tech and Wall Street) manipulates behavior at an industrial scale, and the demos is ostracized from our democracies.