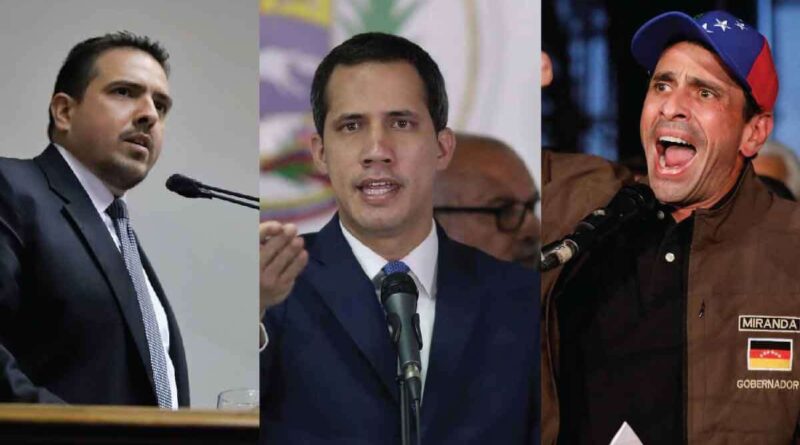 The crisis and the division between the different factions that are part of the Venezuelan opposition worsens more and more and proof of this is the continuous public fights that its members, mainly Juan Guaidó, maintain through statements and social networks against others who have turned their back on him.

A few days ago, Guaidó had a fight with the extreme right-wing María Corina Machado. And now, the most recent fight is the one between Henrique Capriles and his former right-hand man (former National Assmbly’s vice president) Stalin González, because according to him, both politicians do not have his permission to carry out the dialogue process with the Executive Power, which is mediated by Turkey, to move towards a solution to the political dead end in Venezuela.

Since last week reports have emerge mentioning that Capriles and González participate in political dialogue and negotiation meetings with the government of Nicolás Maduro with the mediation of the government of Turkey, to agree on the guarantees for the next parliamentary elections on December 6.

RELATED CONTENT: This is How the Public Fight Goes Between Maria Corina Machado, Elliott Abrams and Antonio Ledezma

This scenario is not to the liking of Guaidó, who assures that “these actions” are not supported by his “international allies”, nor by the alleged opposition “unitary agreement” that promotes abstention in the parliamentarians. This alleged unitary agreement has not been signed by many of the political forces that support Guaido and the US plan and it is promoted by the extremist sectors of the country that participate in seditious and violent plans.

Guaidó, discredited by the corruption scandals for promoting the total blockade against Venezuelans and for not being able to overthrow Maduro, says that he does “not recognize the unconsulted negotiations carried out in a personal capacity between the regime of Nicolás Maduro and the leaders Henrique Capriles and Stalin González.”

Capriles, for his part, who is against Guaidó and against the so-called abstentionist option, indicated through Twitter that on his part he will do everything possible to “get Venezuelans out of this crisis.”

“There are those who end up becoming what they criticize. Talking and negotiating are not the same, unless you want to manipulate and lie. There is no negotiation between Turkey and the opposition in Venezuela. What is appropriate is to speak with everyone who brings us closer to a credible solution,” said the former governor of Miranda in a tweet.

In another tweet, the former presidential candidate also added: “Talking to a member of the international community is normal when you believe in politics and democracy. In a nutshell. To be clear: with the Chinese, with the Russians, with the Europeans, we will talk to everyone necessary to get the Venezuelans out of this crisis.”

Capriles also took responsibility for the presidential pardon to members of the opposition involved in different crimes against the homeland and even against the life of the president, Nicolás Maduro, and said that his only interest is “to see the change in the country.”

RELATED CONTENT: “I Understand the Indignation, but I Want Peace”: President Maduro on the Pardon – European Union’s Borrell Welcomes it

“Today, by my personal efforts we feel satisfied with the freedom of 110 political prisoners. My only interest is to defend Venezuelans and achieve the freedom of Venezuela. We are not going to resign, just as no Venezuelan will until we see the change in the country!” he said.

Meanwhile, Stalin González said that for his part, he is trying to “help the people” and preventing “this conflict from escalating and becoming more painful for Venezuelans.”

“For my part I will try as many times as necessary to find a solution to the crisis. Politics is about helping people. If a negotiation prevents this conflict from escalating and becoming more painful for Venezuelans, I will do it as many times as it is neccesary,” González stressed.

The current dialogue between these opposition leaders and the Venezuelan government was applauded by the Foreign Minister of Turkey, Mevlüt Çavuşoğlu, who indicated on Tuesday that his country is following with satisfaction the evolution of a “positive dialogue” between the government and the Venezuelan opposition, in coordination with the initiatives that have been carried out jointly with the European Union.

“Let’s hope that this positive process is reflected in the elections,” the Turkish Foreign Minister wrote in a message on his Twitter account, where he added that his nation “will always be in solidarity with the Venezuelan people.”