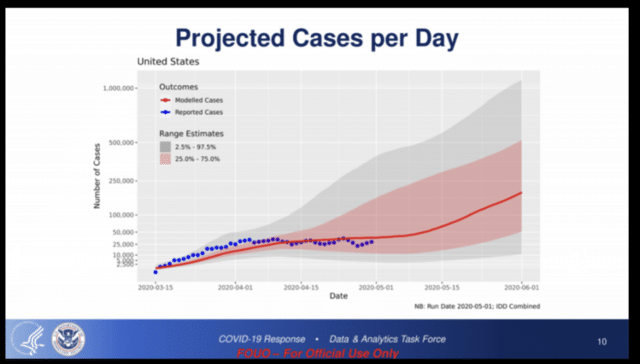 The United States set two milestones on Wednesday: 1,503 people died from COVID-19, the highest level in three months, and the S&P 500 stock index reached its highest mid-day level ever.

One hour after the markets closed on Wednesday, President Donald Trump, the architect of the American response to the pandemic that has left more than 170,000 people dead, devoted almost the entirety of his daily coronavirus “task force” briefing to boasting about the surge of the stock market. In his remarks, Trump outlined the theory governing the pandemic response of the White House, the cockpit of American capitalism.

Pointing to a group of slides prepared by Lawrence Kudlow, director of the United States National Economic Council, Trump related the surge in the stock market to the fact that the economic contraction due to lockdowns in the United States was lower than in other countries.

“The stock market is up almost 300 points again today,” Trump said. “Our economy is performing significantly better than Europe—which people have to understand very strongly; it’s performing better than any market anywhere in the world actually.”

Trump claimed that $9 trillion in financial wealth had been created since March, and that stock values were up by close to 50 percent. “That’s a number that nobody has ever heard of before,” he said, calling the figures “incredible.”

Moving to the next slide, Trump added, “You’ll see the virus-induced economic contraction in the United States has been far less severe than it was with our peers and peer nations.”

According to the figures Trump presented, real GDP fell in the United States by 10.6 percent in the first six months of the year, compared to 15 percent in the Euro area. What Trump left out was the fact that, despite the weaker economic contraction, unemployment surged in the US at a vastly higher level than in Europe.

The statistics Trump fumbled to present were consistent with the observations of epidemiologist Michael Osterholm, who explained the fact that the United States is the world’s epicenter of COVID-19 because the country lifted lockdowns much earlier than countries that had more effectively contained the disease.

Simply, we [the United States] gave up on our lockdown efforts to control virus transmission well before the virus was under control. Many other countries didn’t let up until the number of cases was greatly reduced, even in places that had extensive outbreaks in March and April…

The United States recorded its lowest seven-day average since March 31 on May 28, when it was 21,000 cases, or 6.4 new cases per 100,000 people per day. This rate was seven to 10 times higher than the rates in countries that successfully contained their new infections.

As a result, the United States has suffered five times as many COVID-19 cases as the European Union.

In other words, Trump was describing a policy of deliberately allowing over 170,000 people to die in order to ensure the stock market kept rising. As one group of public health experts recently noted, “We could have prevented 99% of those COVID-19 deaths. But we didn’t.”

Trump’s remarks Wednesday give chilling immediacy to his declaration last week, when confronted with the reality that 1,000 people are dying every day, that “They are dying, that’s true, and it is what it is.”

As the World Socialist Web Site has explained, the US ruling class’s response to the pandemic was driven not by the effort to preserve the lives of the population, but rather by the single-minded aim of defending and expanding the wealth of its financial oligarchy. To the extent that the pandemic played any role in social policy, it was as a pretext to transfer some $6 trillion to Wall Street and the major corporations—endorsed nearly unanimously by Democrats and Republicans.

Trump’s responsibility for these deaths is chilling to contemplate. But he could never have committed this crime without accomplices. While cheerleading the premature reopening of the country, the White House left the decision on reopening to the governors, all of whom, Democrat and Republican alike, reopened businesses in their states before the pandemic was contained. Many Democratic governors, including those of Maine, North Carolina, Kansas and Colorado, actually reopened businesses in defiance of the White House’s own guidelines.

Now, the campaign to get teachers back on the job is being led by Democratic New York Governor Andrew Cuomo, who declared last week that all the state’s schools could reopen, setting the stage for a new surge in the pandemic. For the ruling class, children must go back to school so that their parents can go back to work and pump out profits to pay for the bailout of Wall Street.

The “economic success” proclaimed by Trump is solely the success of the rich. For the great majority of American society, the first six months of this year have been a disaster. The death toll is quickly approaching 200,000. Some 30 million people are unemployed. Following the expiration of federal unemployment benefits, tens of millions are facing poverty and eviction.

Yet nine out of the ten richest US billionaires are wealthier now than they were a year ago, according to the Bloomberg Billionaires Index. These ten individuals have collectively received $200 billion over the course of the past year. Their combined wealth has hit $906 billion, up 22 percent from the year before.

Leading the pack was Jeff Bezos, who, with his fortune of $187 billion, made $71 billion over the past year. Microsoft CEO Bill Gates made $8 billion, Facebook CEO Mark Zuckerberg $20 billion, and Tesla CEO Elon Musk $48 billion.

The surge in the markets has paralleled the surge in deaths. On March 23, the day the stock market reached its low point, just 693 people had died from COVID-19 in the United States. Since then, nearly 170,000 more people have died.

For workers, it is vital to draw the lessons of recent months as the pandemic spirals out of control in the United States. Over the next month, millions of children and teachers will be herded into schools, fueling a massive resurgence of the pandemic that can make even the estimates of 300,000 deaths by the end of the year look optimistic.

The ruling class is perfectly willing to accept hundreds of thousands more deaths if it means that stock values will rise further. That is why matters cannot be left to them.

Across the country, opposition is mounting among teachers and educators to the premature return to school. This struggle must be linked with the fight by workers at factories and other workplaces across the country to ensure workplace safety and an end to non-essential production until the pandemic can be contained and eradicated.

Above all else, this year’s grim harvest of human lives has revealed the homicidal essence of capitalism and made clear that its urgent replacement with socialism is a matter of life and death.