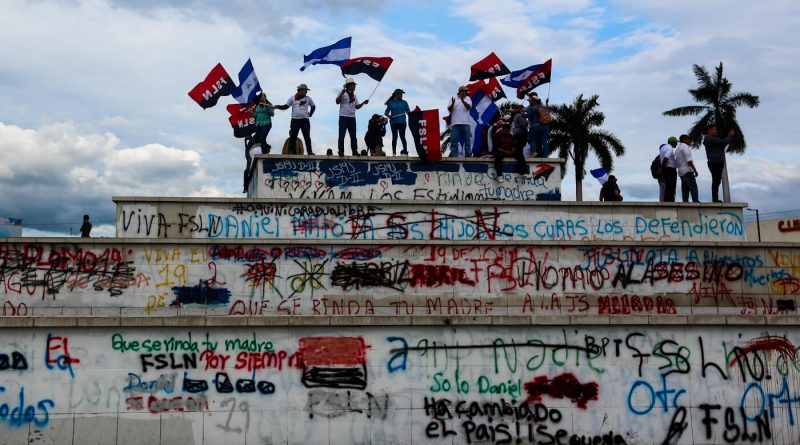 When political conflict results in people being killed – especially at the hands of a government – the deaths are not just personal tragedies, they are propaganda material. This happened during last year’s attempted coup in Nicaragua: the alleged death toll was repeated in practically every international media report and invariably blamed on the Ortega government, its police or supporters. A year after the violence ended, not only have the ‘human rights’ bodies whose reports gave the figures credibility begun to tell the truth about what they did, they’ve also started to fall apart as the supply of dollars dries up.

The Grayzone reported last month on the most dramatic break-up, that of the Nicaragua Association for Human Rights (ANPDH). But it is just a part of a veritable human rights industry in Nicaragua, a country of only six million people. Until recently three local bodies claimed to monitor human rights, all three doing so using foreign funding.  The oldest, the Permanent Commission on Human Rights (CPDH for its initials in Spanish) dates from before Nicaragua’s 1979 revolution, and receives funding from the US National Endowment for Democracy (NED). The ANPDH was set up in Miami with $3 million from the Reagan administration in the 1980s, with the aim of whitewashing the violence of the US-backed ‘Contra’ forces that were attempting to overthrow the Sandinista government. And the third, CENIDH (Nicaraguan Center for Human Rights), was set up with European funding in 1990, headed by an ex-FSLN member, Vilma Nuñez de Escorcia.

None of the three bodies have attempted to be politically neutral and all were opposed to the Sandinista government well before last year’s coup attempt. But when it began last April, they were a key part of the opposition’s propaganda machine. CENIDH and ANPDH, in particular, published regular reports whose bias is made obvious by the language: CENIDH, for example, regularly refers to the Nicaraguan government, elected in 2016, as the ‘dictatorial regime’ of Daniel Ortega and (vice-president) Rosario Murillo. Its initial report, issued on May 4, already exaggerated the numbers of deaths by recording six fatalities on the first day of the violence (April 19), all but one attributed to the government, when in fact there were only three: a police officer, a Sandinista defending a town hall from attack, and an uninvolved bystander. By late July CENIDH’s fifth report logged 302 deaths, all attributed to ‘state terrorism’.

By the same date, its rival ANPDH was reporting no less than 448 deaths in ‘civic protests’, a figure repeated by many international news sources and by the UNHCR. By early September, ANPDH’s death count had reached 481.  Álvaro Leiva, ANPDH director categorized the deaths with remarkable confidence and specificity: 152 died in ‘random executions’, 116 in ‘planned executions’, 86 in ‘disproportionate’ clashes between government forces and civilians, 57 in ‘selective executions’, 36 deaths ‘appear to be planned and executed by hooded and armed paramilitaries’, and only eight were unexplained. By the end of the same month in which there was very little violence, ANPDH’s death toll – all blamed on the government – had reached 512.

RELATED CONTENT: Say No to the McCarthyite Attack on Chicago Teachers

By early July last year, the accounts published by the ‘human rights’ bodies had already started to unravel. Enrique Hendrix, a resident of Managua, went systematically through the lists to produce a report he called Monopolizing death: Or how to frame a government by inflating a list of the dead. He found, for example, that CENIDH’s list included a suicide, traffic accidents and various duplications or unexplained deaths. In total, of the 167 deaths included in their early reports, just 31% (51 people) were actually protesters who had died in the conflict. In the case of ANPDH, who by that stage had logged 285 deaths, only 20% (58) were confirmed as being protesters.

The report Dismissing the Truth – which responded to Amnesty International’s totally unbalanced and poorly researched investigations of last year’s violence – examined in detail the casualty lists produced by the ‘human rights’ bodies relating to the central zone of Nicaragua. It found that more than half the deaths recorded by ANPDH were wrongly attributed to the conflict.

By September, Amnesty International was referring to 322 deaths, ‘most at the hands of state agents’, based on the counts by IACHR and the local bodies. Its second report on the conflict perversely accused the government of ‘challenging the information put forward by human rights organizations’ as if their casualty lists should simply have been uncritically accepted. Of course, the whole point of examining and challenging the lists was precisely because they were part of the propaganda drive against the Ortega government, referred to in practically every international media report on the crisis and cited as authoritative by international bodies, including detailed references to ANPDH by the UN Commission for Human Rights in its 2018 report on Nicaragua.

In February 2019, the National Assembly’s Truth Commission was able to issue a final report on the death toll from the attempted coup which, after exhaustive analysis of the different sources, confirmed the total number of conflict-related deaths as 253, less than half that claimed by ANPDH six months before. These consisted of 31 known supporters of the opposition, 48 probable or actual Sandinista supporters, 22 police and the remainder (152) of unknown affiliation.

But 2019 has turned out to be a bad year for the three ‘human rights’ bodies. Two, ANPDH and CENIDH, were found by the government to have violated their own statutes and their registration as NGOs was terminated. Some of their functionaries fled to Costa Rica. CPDH continues, but its lawyer María Oviedo was arrested recently when, in a visit to a police station in support of a leading opposition member who had been found to have an unregistered firearm, she slapped a police officer. The officials of the other two bodies are fighting among themselves. A director of CENIDH, Gonzalo Carrión, having tried to open a new NGO in Costa Rica, was denied support by his ex-colleagues who feared he would receive the outside donations that used to go to CENIDH.

The plight of the former staff members of ANPDH is even worse. The former general secretary, Álvaro Leiva, was given asylum in Costa Rica last October, a move welcomed by the IAHCR’s Paulo Abrão who had in June awarded him “protective measures”. However, as The Grayzone reported, Leiva has also attempted to open a new NGO in Costa Rica, to which is ex-colleagues have also responded by accusing him of appropriating funds supplied by US bodies such as the NED. More importantly, they have accused Leiva of requiring them to inflate ANPDH’s casualty counts last year, because he believed this would help to secure extra funding from the US. ANPDH director Gustavo Bermúdez, in a press conference ignored by the right-wing media, acknowledged that ANPDH had inflated the death toll relating to last year’s violence, including in its list even elderly people who had died of natural causes.

In recent years, ANPDH received over $88,000 from the NED (and $348,000 from other US sources). CPDH received $180,000 from the NED in 2018 alone (out of NED spending of $1.8 million that year, to promote Nicaragua’s opposition bodies). Of course, far from being genuinely committed to promoting human rights, the NED sees these local bodies as one element of a regime-change strategy. They are propaganda weapons, but with a useful image as respected human rights champions standing up to ‘dictatorial’ regimes.

Such bodies used to be subject to much closer scrutiny and called out for their role in opposing revolutionary change. Human Rights Watch, at the time called Americas Watch, gave ANPDH very little credibility in 1989 not long after it first opened. Americas Watch said it was “for all intents and purposes a US State Department funded arm of the Nicaraguan Resistance” (the latter was the formal name of the US-backed Contra forces fighting the Sandinista government). The left-leaning political magazine Envío was highly critical of both CPDH and ANPDH in the 1980s. It described Lino Hernández, then director of the CPDH, as coming from the ‘far right’. Commenting on the $3 million ANPDH received from the US government, it asked ‘What kind of human rights watchdogging has the ANPDH done with all this money? Hardly a whimper, much less a bark.’

Thirty years later, much has changed. When ANPDH and CENIDH lost their registration last year, HRW said that“Public officials repeatedly made stigmatizing statements to undermine the credibility of [human rights] defenders.” As noted earlier, AI does not even accept the Nicaraguan government’s right to analyse the death counts produced by human rights bodies. Envío magazine has become an unflinching critic of the Ortega government and supporter of CENIDH.

Nicaragua’s local ‘human rights’ bodies have provided HRW and AI with evidence that fits their own prejudices about the Ortega government. While these local bodies need publicity from HRW and AI to maintain their profile, for their funding they need to show organizations like the NED that they are useful agents of regime change. With the failure of last year’s coup attempt, it’s said that NED is already diverting funds away from Nicaragua and towards Venezuela. CDPH, ANPDH and CENIDH are in disarray now that the coup attempt they supported has collapsed. Are we seeing the death-throws of the three organizations, with their very biased views of what constitutes human rights in Nicaragua?