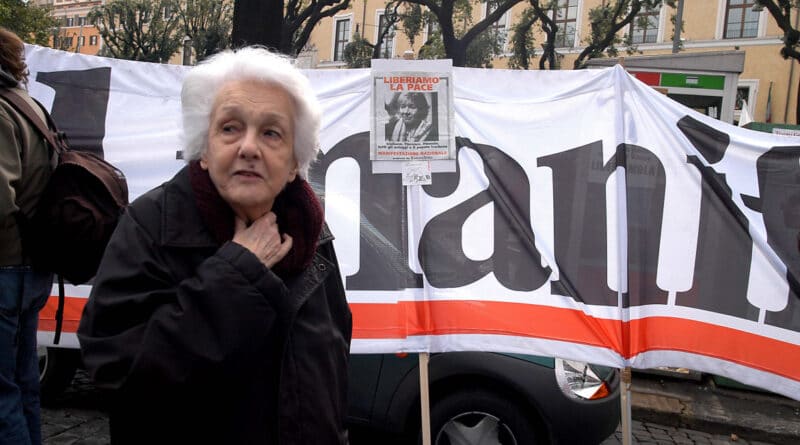 What was the secret of their success – and of the success of il manifesto? Unity in diversity. Luigi Pintor, the great political head, with passion, flair, intelligence, a pianist’s ear; Valentino Parlato, with his eclecticism, deep culture, taste for economic analysis, and pleasure in conversation, especially with the enemy; Rossana Rossanda, with her originality of thought, reflected in a very personal writing style, attention to the facts of the world with a continuous cosmopolitan subtext, sensitivity towards rights, towards true justice, with a vital and dynamic idea of communism, a process of liberation that is complicated but possible.

All unique characters, with a rich and intense personal and collective history, who found in each other’s diversity a “more,” a resource, an enrichment, even when it went towards the opposite extreme. They were later joined by Michelangelo Notarianni, just as cultured, closer to Rossana than to Luigi and Valentino in his sensitivity towards “new” cultures with respect to the communist tradition, ecology, psychoanalysis, science, likewise itching to build a better Italy, a better world, through the means of a small but grand newspaper, weaving the here and now together with the need for a long-term thought, to be renewed every day.

RELATED CONTENT: UN Report Contributes to US Aggression Against Venezuela

The founders of il manifesto had this extraordinary far-sighted ability to find a fruitful meeting point between different intelligences, experiences, lives, around a shared project, a pact that made possible the birth of a highly original newspaper like il manifesto, its development and—despite what some may think—its further continuation, even after them. They did not establish a “school” of their own, and if il manifesto was not still being published and with a future to look forward to, we would not be here to talk about them: without the happy interaction between them, and the transmission of this “secret” to those who followed, they would have been limited to a short historical season, and il manifesto with them.

The passing away of Luigi, Michelangelo, Valentino, and now Rossana, as the 50th birthday of il manifesto approaches, must make us reflect on the extraordinary potency of the mix that has allowed the birth and development of an enterprise like this communist daily newspaper, with the idea that, following in this wake, its life can continue for another half-century. A mixture that was certainly composed of special personalities—an ‘us’, not a sum of ‘I’s, however great they were—but above all by their ability to place into the right relationship those parts that in newspapers, even today in the age of the Internet, normally tend to be kept separate, while in reality they are interconnected. The main “narrative” structure was and is simply the reading of the facts, according to an international dimension of the issues, including domestic and including social and cultural ones.

Paradoxically, today, in the era of globalization, there is a tendency to treat political, economic and cultural issues separately from international dynamics, without any effort to look for the threads that connect events. This special chemistry of il manifesto is mainly due to Rossana Rossanda. There was much more to her than just the international and internationalist “culture” of the Italian Communists. Hers was, in fact, more that of a cosmopolitan.

Rossana was able, as few are, to build and cultivate significant and lasting political and intellectual relationships around the world. Her sensitivity led her to try her hand at the great international issues that characterized the second half of the 20th century. The archive of il manifesto is a gold mine of wonderful RR articles on international politics. However, it would be not only reductive, but also misleading, to confine her considerable activity as an intellectual, writer, and journalist within a well-defined perimeter, even if this is of an international dimension, because her point of view was, above all, one with which one could look at things, phenomena and movements, with which to interpret and describe facts, a point of view that also placed Italian events, the facts of culture and current affairs within the broad perspective of a world in motion.

All her articles display this sensitivity. Even her being a communist found its foundation and nourishment from this solid ground—and from here, most likely, came her growing intolerance, her increasingly severe criticism of a politicism without ambition and the triumph of short-term tactical thinking which, after (and against) the hopes generated by the great ferments and shocks of the late sixties and seventies, had conquered and “corrupted” the left. This made them lose the compass that had rendered them major protagonists of the great revolutionary changes of the early twentieth century, then of the anti-fascist struggle, and then of the affirmation of a great communist party in Italy and an equally important trade union.