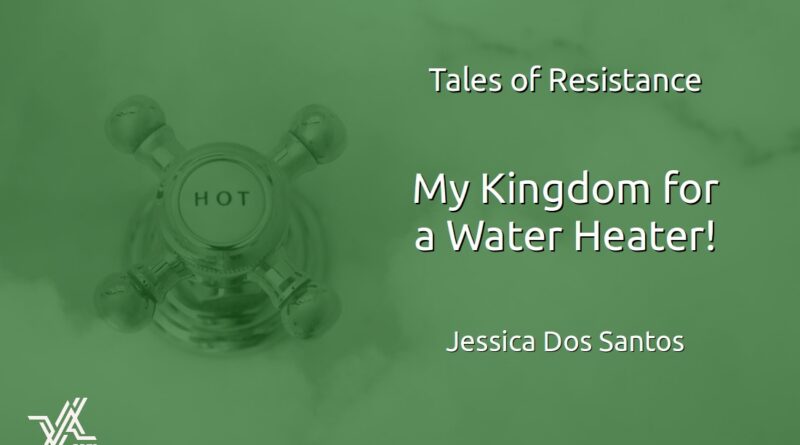 In her latest VA column, Jessica Dos Santos reflects on the trials and tribulations she went through to replace a water heater.

About a year ago, my water heater exploded in the middle of the night, leaving a trail of smoke, and the smell of copper in every inch of my apartment for more than a week.

After the scare, and after taking stock of the damage, I found out that the appliance had no fixing. Something that seemed insignificant, or at least easy to fix, became a kind of small frustration that surfaced every day while I showered with cold water.

Yes, I know I live in the Caribbean, and that the weather in Caracas is the best in the world, but please understand: for me, the tiniest cold breeze is like being in the North Pole. As such, showering with cold water is like punishment, a reminder that in present-day Venezuela everything is beyond reach in relation to the average salary. I had a little voice in my head telling me time and again: “this is outrageous, you work so hard and you can’t even wash your butt with hot water!” When I tried to improve things by heating water in a pot, the voice became a chorus of raucous laughter mocking me.

RELATED CONTENT: Venezuela: How Much More will the Price of Dollar go Up?

I felt miserable, defeated, incapable of achieving the one thing I deserved. Yes, I felt like I deserved a hot shower, dammit. Nevertheless, I couldn’t even bring up the subject. In other words, I did not have the audacity to complain about my “existential problem” to people who, for the most part, had it much harder than me.

I tried to make peace with it. I would tell myself: “come on, cold water prevents hair loss, strengthens the skin, fills you with energy.” I even tried attaching a spiritual dimension to it, since in my yoga classes the instructors are fond of saying that we should shower with water at “room temperature.”

Some days I managed to fool myself better than others. But in the end it was mission impossible. Deep into my soul I craved my hot water. That’s why, whenever I could, I would set aside one, two, three or four dollars in an empty mayonnaise jar, until I had enough to buy the longed-for water heater.

A few days before my 31st birthday, 365 days on from the explosion, the money was complete: I even had the luxury of having the heater delivered to my doorstep. Setting it up was a nightmare, but that’s beside the point. As soon as it was up and running, I proceeded to shower with boiling water for a full hour. Under the water, amidst the steam, with my skin turning red and wrinkly fingers, I found myself laughing, while in my head I screamed: “how the fuck did I survive a whole year without this?”

Once the steam had cleared, a couple of deeper thoughts came to my head: I survived a year without a water heater, tried to convince myself it was for the best and kept finding more and more arguments to back this up. Yet, as soon as I had enough money and the chance to revert the situation, I jumped on the opportunity. Why? Because cold water was not my choice, it was the result of an accident, an unexpected situation, and it dragged on for months and months for economic reasons that were out of my hands.

That’s when we ask ourselves: how lasting will the lessons we are “learning” amidst this economic crisis be? Sometimes government leaders and even we pride ourselves with a number of “achievements” which in truth only amount to an (undoubtedly incredible) ability to resist while deep down we continue hoping to gather the money that will allow us to replace the heater. But is that so wrong?

In 2008, when Raúl Castro greenlighted the Cuban Telecoms Company to sell cell-phones or allow Cubans that had a mobile account registered to a foreigner – a very common practice – to put it under their own name, most of the major media outlets criticized the long queues, claiming that the Cubans “are more for consumerism than for communism.” There are plenty of examples like this one.

And here comes my second reflection: both us Venezuelans and the Cubans crave things that have become inaccessible not because the political model we support bans them, but because the questionable policies by local leaders alongside the brutal foreign sanctions have put them out of reach. There is no communist or socialist manifesto that forbids hot water, but there were plenty of other things stopping me, for a year, from having a water heater.

Now, I know I can live without a water heater for as long as it takes. But I also know life is more enjoyable with hot water and I will try to have it if I can. This goes for water and everything else. It goes for me and everyone else. The struggle continues.