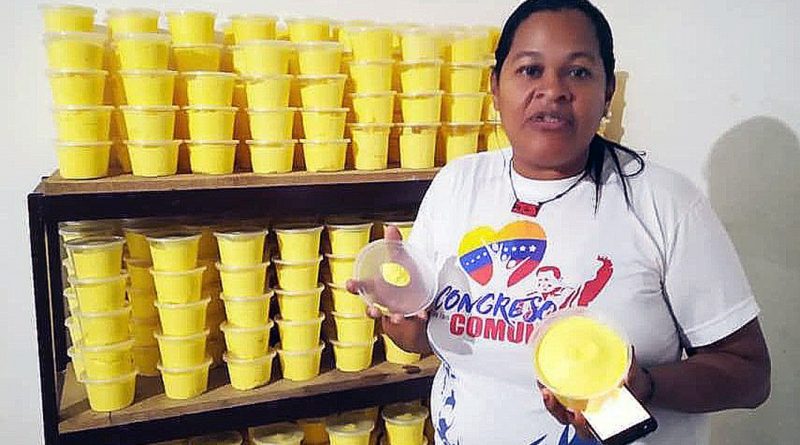 Women in Caracas slums have a plan; setting up an economic system that allows them to ensure that food arrives directly from producers to their table. Organization is key, it is what they are calling people’s power.

“It looks like a star-spangled horizon at night. If you could see it when the lights are switched on,” says a commune member on the roof of an unfinished house in La Libertad neighborhood in southern Caracas. In the area where the hills of the poor meet up with green mountains. It’s the end of the city, the border. As usual, there is a class and political geographic division; the heights belong to the poorest —most of them Chavistas— while the lower parts are for the lower middle classes —in general, opponents of the government.

The commercial epicenter is in the lower part, a street roundabout in a neighbor district is the most important area. Everything you need can be found there. The problem, as in the rest of the country, is about prices. There you find retail stores, supermarkets, groceries, and a corridor in a small shopping mall where the seat of the System of Communal Socialist Economic Initiative was set up a month ago.

This store has packages of corn meal, coffee, sugar, salt, laundry soap bars, shelves with butter and buttermilk. There is little left. Almost all of it has been distributed and they are waiting for a new shipment. The previous one was around 14 tons. This one will be bigger and it will include two new products; toilet soap and wheat flour.

“One of the plans is to prove that when people are organized, mobilizing, aware, they can face the war, to help to preserve the revolution, to build with concrete actions,” says commune member Yaritza Navarro, who spoke surrounded by several women.

The System began three months ago. The need for it appeared before, when it was evident that a major problem with prices was the monopoly of several products, the chain of intermediaries, and speculation on behalf of many traders. The question always was how to transform diagnosis into actions.

The starting point was the conviction of moving on, self-organization, and the certainty of doing it while having the support of the State or not. How do you start when you do not have capital in a scenario like Venezuela’s current economy?

The diagnosis was like this; there are rural communes producing foods and there are urban communes willing to buy from that production. It is necessary to build a system of communal economy to go directly from the first one to the second, staying in charge at the same time of the final distribution, pushing intermediaries and traders aside.

They started with 1,000 kilograms of coffee on credit. The hardest part was to convince the commune, located in Lara state in the western area of the country, to send that amount without a previous payment and taking care of the transportation as well. Confidence and the legitimacy of communes meeting in Caracas was decisive. The System, taking its first step, brought together 13 communes in one district of Caracas.

The second step was to receive the coffee without having a storage center yet —which is now open in the small shopping center. Each commune was in charge of distributing and selling. They gathered the money and paid the coffee grower commune. This primed the mechanism that allowed them to get their first capital and surplus.

“With that surplus we took the risk of more chains with producers and other food staples,” Yaritza explained. In a scenario of currency devaluation, they decided to reinvest in more products —it’s better to have food than money— and to use the surplus for an essential tool; a communal truck, which was broken and they did not have money to repair it.

The System of Communal Socialist Economic Initiative started up. It was designed to deal with three elements at the same time: economics itself, organization, and politics. The goal never was to open a store to trade products from rural communes but to strengthen every territorial organizational means, what they call people’s power, through concrete actions.

Commune member Luisa Gragirena showed me a copy of the Organic Law on Communal Economy: “This is our foundation. Our beloved president Hugo Chavez left us the legal platform so that we, as people’s power, develop and break the schemes of the capitalist system. It is not easy of course but it’s not impossible.”

“The present law aims at developing and strengthening people’s power, establishing the norms, principles and procedures for the creation, operation and development of the communal economic system… to satisfy the collective needs and reinvest the surplus socially by means of strategic, democratic and participatory planning,” Luisa reads.

There is no communal economy without people’s organization, without building democratic bodies to participate and decide. In the System, they decided that this main body meets every Wednesday at 3pm. Commune spokespeople meet, evaluate, plan, and decide.

Last Wednesday, for instance, they presented new products that will be included in the next operation. These are products manufactured by the Family Production Unit represented by Rosa Melendez, a commune member from Caricuao in southwestern Caracas: It has soaps, shampoo and conditioner. So far, they manufacture 4,000 soaps monthly. They are expecting to reach 20,000 per month through the funding and shops provided by the System.

The target is to move towards production: “We are going to fund certified seeds and according to the land, we are going to boost productive units. By December, we will be able to eat our green onions, bell peppers, and the vegetables used for our traditional food at Christmas,” Yaritza explains.

Every step has been achieved by means of organization. They expect to set up storage centers in every commune section of the System; to add two new items in every new dispatch; to add more communes; achieve communal chains that may be sustained in this context; that it ensures a fair income for producers and that the surplus is reinvested.

They have achieved a strategic issue in these three months: guaranteeing products to provide the breakfast eaten in poor neighborhoods: coffee, arepa, butter, and now the buttermilk, which had disappeared from the market. They are still lacking cheese and animal protein sources and thta is one of their goals.

They have many goals. They —most of them women— have a strong will to face their hard moments collectively. Chavismo here has one of its more clear meanings, in each of these women, in communal councils, communes, the system. There are thousands like Yaritza and Luisa across the country.

As we said goodbye they said,”It’s good that people know how Venezuelans are fighting against the economic blockade,”.