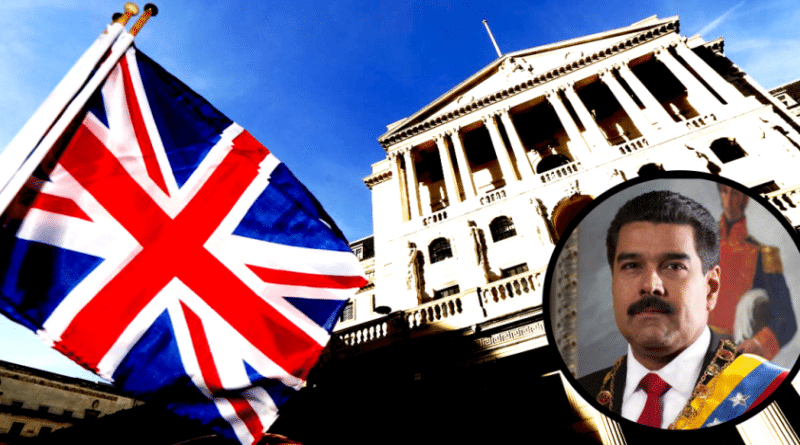 The United Kingdom’s High Court recently ruled that the Bank of England is acting lawfully in refusing to hand over $1 billion worth of gold held in their vaults belonging to the current Venezuelan government. They argue that Nicolás Maduro is not the legitimate president of the Latin American country, despite the fact that he was democratically elected in 2013 and reelected in 2018. Instead, they declared recognition of the self-declared “president” Juan Guaidó as the legitimate authority. This ruling comes at a time when Venezuela’s economy is being illegally strangled by U.S. and European sanctions to coerce the country into political change. The effects are increasingly devastating for millions as they struggle to contain the COVID-19 pandemic.

What follows is not a defense of the legitimacy of Maduro’s government, as this can be easily determined and there is already plenty of serious and reliable literature on the subject. What we will probe here is whether the U.K. government and its institutions are really in a position to make unilateral decisions in the name of “democratic legitimacy” considering their own national and international reputation.

When the Cuban revolutionary leader Fidel Castro died in 2016, the BBC invited Dr. Denise Baden, an academic on Cuban policy, to speak on his death and what this meant to the people of the island. What the state-funded broadcaster attempted around this story was the usual rhetoric of Fidel as a “dictator” and the Cuban government as inherently undemocratic. What quickly became apparent, to the surprise of the presenter, was that the Western academic refused to toe the usual Western line and presented Fidel and his government in a fair light. She went on to hold up a mirror to the Western world by stating that if they were to examine the United States with the same lens, they would find that their crimes would overshadow anything the Cubans were supposedly guilty of. It isn’t just the U.S. that we should examine.

Britain likes to portray itself as a refined and balanced Western country in contrast to its younger brother across the pond. They are skilful at creating this narrative around them despite engaging in identical practices deep within their political, social, economic and cultural life. Let us briefly probe the British political system, which they boisterously claim is an example of democracy in the world.

For centuries, up until the present, the Head of State in the United Kingdom has been an unelected monarch who claims this powerful post simply through their bloodline. Prior to taking office, the elected U.K. Prime Minister must first ask this unelected power permission to form a government. British people downplay this embarrassingly yet essential factor in their political system by stating that it’s merely symbolic. They will have us believe that the monarchy’s immense unearned wealth, privileged social status and evident influence over political power, is inconsequential, for decorative purposes only. Although much more could be said to debunk this claim, let’s now turn our attention to the main objective at hand: their political system and the premiership.

Although in theory and rhetoric the U.K. holds “free and open elections,” just two parties (Labour and Conservative) have dominated political power for nearly a hundred years. The Conservatives elect their candidate through a ballot which only members of their party participate in, and only after they have been selected by the party’s roughly 300 Members of Parliament. The Labour Party elect their candidate through a ballot consisting of a selected group of their Members of Parliament, usually no more than 10 of them and they are also each backed by senior Members of Parliament of their party. In the general elections, the Prime Minister is ultimately determined by the number of constituencies won by each party, which has to be a majority of 325 seats. The voter turnout in the last general elections was 67 percent of nearly 46 million people eligible to vote. This figure is around 30 million people, half of the U.K. population.

A key detail to consider with the above as context is that the vast majority of the political leaders elected to Parliament belong to a ruling class that is prepared in special schools with the most notorious being Eton. Since the middle of the 20th Century, Britain has had 20 prime ministers who have passed through this exclusive secondary school for the rich, including the current Prime Minister Boris Johnson. Furthermore, the vast majority of British PMs have all gone to either Oxford or Cambridge, both world-famous for their prestige and inaccessible to regular British citizens.

Another crucial factor that we must consider when probing Britain’s democratic process is their rules on financial support during elections. Effectively, it was only in 2006, through the Hayden Phillips inquiry, that the state saw it necessary to scrutinize what was then a more-or-less unrestrained practice of private spending in British elections. Although the inquiry helped to uncover rife political corruption in the nation’s political system, it has only touched the surface and made those culpable become more conniving with their approaches. For example, rich capitalists who monopolize political power in the U.K. have been able to find loopholes in the rules regarding the financing of political parties and campaigns that were set up thanks to several recent inquiries and their recommendations. For example, while donations of up to £7,500 can be made to political parties, the limit is often bypassed by channeling them anonymously or through members’ associations.

It does not take thorough research or analysis to observe that the British political system does not come close to possessing what one would call a strong or solid democratic system or process. When one takes into account that an unelected monarch is the Head of State, that millions of the potential electorate do not vote or are not encouraged to vote, that the very great majority of its political leaders come from a privileged political class and are groomed in exclusive educational institutions and that elections are practically bought by the wealthiest in society, Britain cannot even come close to claiming superiority in political freedoms. In fact, a serious study will not only conclude that Britain does not have the moral authority to police democracy on an international stage, but also that they are, in fact, one of the world’s leading exporters of political tyranny.

This is all in stark contrast to Venezuela’s current situation in which the current president is from a working-class background and had a career as a bus driver before managing to climb up positions of leadership through merit. Interestingly, it is illegal to receive or seek anonymous donations for your party during elections in Venezuela, a loophole that continues to be used by wealthy capitalists to buy elections in the U.K. While the U.K.’s current government won the general elections with 47 percent of the vote, the socialist government in Venezuela won with 67 percent of the votes, although the percentage of voters was down below half of those who are eligible to vote.

To conclude, the U.K.’s insistence that Maduro is not the legitimate president of Venezuela is absurd from all angles of analysis. Their grotesque acknowledgement of the extreme right-wing leader and terrorist Guaidó as the lawful president has to be seen as an extension of their own capitalist and elitist agenda. Their interest in withholding and unfairly redistributing Venezuela’s government wealth to the right-wing opposition goes hand-in-hand with their undemocratic practices both in their own political system and in their imperialist minded foreign policy. Despite the extreme hurdles that Western capitalist powers put on Venezuela’s socialist government, the people of Venezuela and their democratically elected government show no signs of turning their back on their heroic socialist project.