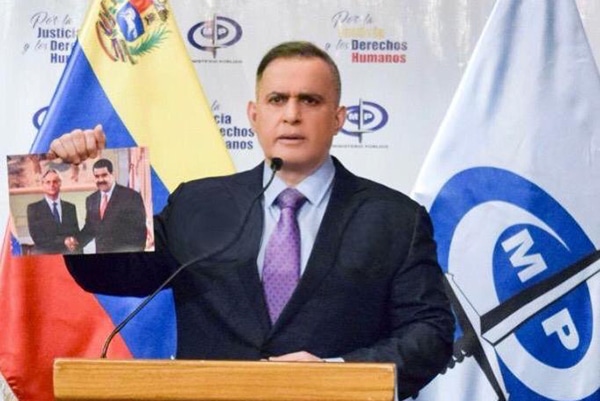 Venezuela’s attorney general, Tarek William Saab, reported this Friday on the issuance of arrest warrants and freezing of assets for a group of “officials” appointed by opposition deputy Juan Guaidó, for their alleged relationship with the retention of Venezuelan gold in the Bank of England and for offering the disputed territory of the Essequibo to Guyana.

William Saab reported that these orders are against Ricardo Adolfo Villasmil, Giacoma Cuius Cortesia, Manuel Rodríguez Armesta, Nelson Andrés Lugo and Carlos Antonio Suárez, who were appointed by the self-proclaimed “president in charge” as members of the Board of Directors of the Central Bank of Venezuela (BCV), an act without any legal validity.

RELATED CONTENT: This is What Happened this Sunday 5-J at the Venezuelan Embassy in Brasilia

Similarly, these measures were issued against José Ignacio Hernández, Irene De Lourdes Loreto and Geraldine Afiuni, who are “fake officials of the ‘Office of the Special Procurator (a position that does not exist in the Constitution).”

The crimes charged are treason to the homeland, usurpation of functions and association to commit a crime.

Neumann, gold and the Essequibo
The prosecutor also announced arrest warrants against Vanessa Neumann, Guaidó’s “representative” in the United Kingdom, which according to Caracas, is related to the offer to deliver the Essequibo to Guyana; Julio Borges and Carlos Vecchio, who are already fugitives from Venezuelan Justice.

This decision was made after last Thursday a British High Court announced that it will allow Guaidó, and not the Venezuelan State, to access 31 tons of gold of the South American country, valued at $ 1.8 billion, which are withheld by the Bank of England.

Similarly, the day before, the Venezuelan vice president, Delcy Rodríguez, denounced in a press conference the negotiations of Neumann with Guaidó, whom he would have asked, in exchange for recognition as “president”, the Venezuelan gold reserves and the territory of the Essequibo.