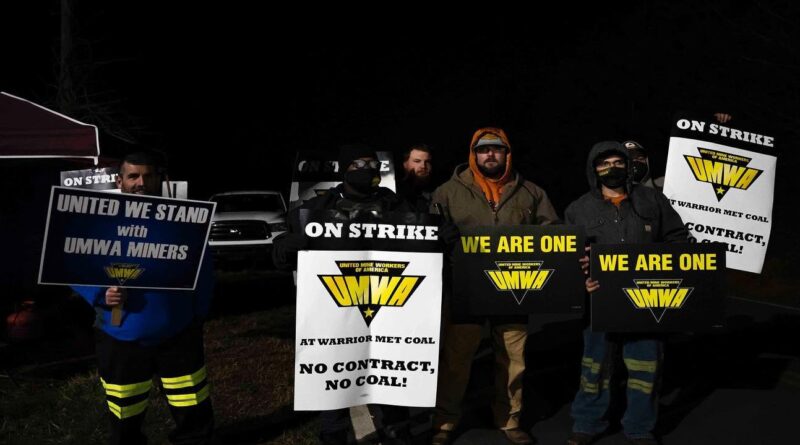 Thank goodness Teen Vogue has a labor reporter, because without Kim Kelly, we might not be hearing anything about the United Mine Workers of American (UMWA) strike at Warrior Met Coal in Brockwood, Alabama, where over 1,000 miners have been on strike for over two months. Here is the UMWA strike page (which permits donations by check, but not online, which seems a little old school).

Warrior is a U.S.-based, environmentally[1] and socially[2] minded supplier to the global steel industry. It is dedicated entirely to mining non-thermal metallurgical (met) coal used as a critical component of steel production by metal manufacturers in Europe, South America and Asia. Warrior is a large-scale, low-costproducer and exporter of premium met coal, also known as hard coking coal (HCC), operating highly efficient longwall operations in its underground mines based in Alabama. The HCC that Warrior produces from the Blue Creek, AL, coal seam contains very low sulfur and has strong coking properties and is of a similar quality to coal referred to as the premium HCC produced in Australia. The premium nature of Warrior’s HCC makes it ideally suited as a base feed coal for steel makers and results in price realizations near the Platts Index price.

So, high prices and low costs. And why are the costs so low? Well, there’s a history here. Warrior Met has a history. Coal barons gotta coal baron, and it’s been that way for some time. From the Montgomery Herald, “Recovery includes humane priorities“:

Warrior Met was once known as Jim Walter Resources, known also as a builder of affordable stick-built homes across the southeast, including West Virginia. In Alabama, the firm had North America’s deepest coal mines at 2,000 feet that produced methane gas and high-quality metallurgical coal. On Sept. 23, 2001, a cave-in caused a release of methane gas that sparked two major explosions, killing 13 UMWA members.

Then U.S. Secretary of Labor Elaine Chao, spouse of U.S. Sen. Mitch McConnell, R-Ky., cited Jim Walter for 27 violations and $435,000 in fines. She then approved MSHA reducing the fine to an insulting $3,000, which was appealed by the UMWA. MSHA then increased the fine to $5,000.

Warrior Met Coal took over and workers agreed to cut their wages and benefits to keep the mines open. Employees said the company promised to restore some benefits after five years. Warrior’s latest offer is about a 10% pay increase, but that doesn’t cover what they lost.

“Oh it’s a slap in the face,” [miner Courtney Finklea] said. “All we wanted was a piece of the pie, and I guess the pie was never given to us.”

Shortly after the strike was launched and more than three-quarters of the workers walked out, the company came up with a tentative agreement with UMWA negotiators, which only offered a wage hike of [$1.50] per hour increase, over the next five years. This deal was overwhelmingly voted against by union members with over 91 percent voting ‘no’. On April 12, union members voted along similarly large numbers to continue their strike.

Ramey Foster wanted to illustrate why miners have been on strike for more than two months against Warrior Met Coal, so he pulled out two small booklets.

One was thin, yellow, dog-eared and stained, while the other was a pristine, thick white paperback perhaps four times the size of the other.

“This is the contract we’ve been working under,” Foster said, holding up the smaller one, which he kept in the bib of his overalls while in the mines.

James Traweek has worked at Warrior Met Coal for four years at the No 7 mine in Brookwood. He explained miners accepted a $6-an-hour pay cut and reduction in health insurance and retirement benefits during the bankruptcy process five years ago, while adhering to a strict attendance policy.

“We were required to work six, sometimes seven days a week, for 12 hours a day. We worked on a four-strike system, which meant missing four days in a year resulted in termination,” said Traweek. “The only thing that was accepted as an excuse was a death in the immediate family. We had to work sick with the flu and many other illnesses in fear of losing our jobs.”

He noted the workers were just seeking to be compensated what they were worth in wages and benefits comparable to other unionized mines. Warrior Met Coal have brought in replacement workers as part of their continuity plan, the use of which Traweek characterized as “gut-wrenching”.

“We’re fighting for our families and every other member of the organized labor community across the world. We can’t allow corporate greed to rob us of our dignity and worth,” added Traweek. “After bringing a company from bankruptcy to record breaking production, we feel we deserve more.”

The United Mine Workers of America tells WBRC, some of its members have been hit by cars three times in the past three days while on the picket line.

In video, you can see a red truck bumping someone picketing outside Warrior Met Coal.

The other video shows a black truck hitting someone else as it made its way into the plant.

UMWA feels this is the company or some of its workers way of not allowing its workers to rightfully protest.

And meanwhile, nothing is complete without the usual cast of characters:

A supposed defense of coal miners, their families, their way of life, and their culture has been front and center of the Republican agenda ever since the push for decarbonization began. It was a key part of the Right’s pushback against Obama and his “war on coal.” Hillary Clinton faced tremendous pushback for her awful statement on the 2016 campaign trail that she was going to “put a lot of coal miners out of business.” In contrast, Trump said, “we’re going to put these coal miners back to work,” even bizarrely donning a hard hat in coal country at one point.

As all this has unfolded, I was waiting for someone on the Right to speak out in support of these workers. This, at least in appearance, has all the trappings of a story that conservatives can rally around. You’ve got coal miners, in Alabama, many of whom are conservatives (I saw more than one MAGA hat while walking the picket lines with them), fighting for themselves, their families, and their communities. They’re demanding fair compensation against elites (Republicans hate elites now, right?), and the government is coming in and suppressing their freedom of speech, freedom of assembly, and freedom to protest. What’s missing for a good conservative culture war story?

Well, it isn’t what’s not there. It’s what is there. This coal miners’ strike has something that stories about the Great Cancellation of Dr. Seuss don’t: working-class solidarity wielded against bosses.

If the same right-wing talking heads who spent hours wailing about Mr. Potato Head a few weeks ago decided to rally around the strikers, many in the conservative rank and file would join them. But those conservative talking heads never will, because it threatens their class interests and the bosses they carry water for. Because if coal miners who are conservative and liberal, Black and white, in a deep-red state like Alabama can walk off the job to demand better pay and working conditions, then maybe the average Fox News watcher could, too. And we can’t have them thinking like that.

Wussy Democrats. From the Week:

This is an area where President Biden could accomplish a lot just by speaking up. To his credit, he did mildly encourage the union drive at Amazon months ago, but that was always going to be an uphill battle. This time the union already exists, and only wants a fair contract. The risk calculation for Warrior Met would change very quickly if the president was looking over their shoulder and directing a lot of media attention in the process.

The Fratricidal Left. From WSWS:

Top UMWA District 20 officials Larry Spencer and James Blankenship physically assaulted two members of the “Dixieland of the Proletariat” podcast, falsely believing them to be representatives of the World Socialist Web Site. Both Spencer and Blankenship are members of the executive board of the Alabama AFL-CIO.

During the assault, Spencer told the podcasters to “get the f**k out of here” and flipped over their table. Blankenship threatened to kill one of the podcasters, who is black, shouting: ““I’ll beat your mother f**king brains out, boy!”

I dunno. Did Spencer and Blankenship negotiate that $1.50 raise?

And finally, an unusual member of the cast of characters:

You might be interested to know that CALPERS, the largest US public employee union pension, and CALSTRS, the California teachers union pension, are owners of Warrior Met Coal per their most recent holdings disclosures. Hmmm.

Wait, what? A highly principled organ of a deep Blue state working against a union? Doesn’t CalPERS have some sort of social justice policy that covers this situation?

* * *
The Warriot Met story has it all, doesn’t it? I can’t understand why “Rachel” doesn’t cover it every night….

[1] From AL.com, “State blames coal mine after creeks turned black near Tuscaloosa“:

The Alabama Surface Mining Commission has issued a notice of violation to Warrior Met Coal after two local creeks ran black for weeks with dark colored sediment near the company’s Mine No. 7 in Brookwood, Tuscaloosa County…. The pollution in the creek was first reported by nearby residents, who lodged complaints with ADEM and the Surface Mining Commission on April 26. According to state records, ADEM inspected the site and collected water samples on April 27, and the mining commission inspected the site on May 6 and 7, informing Warrior of the violations on May 7.