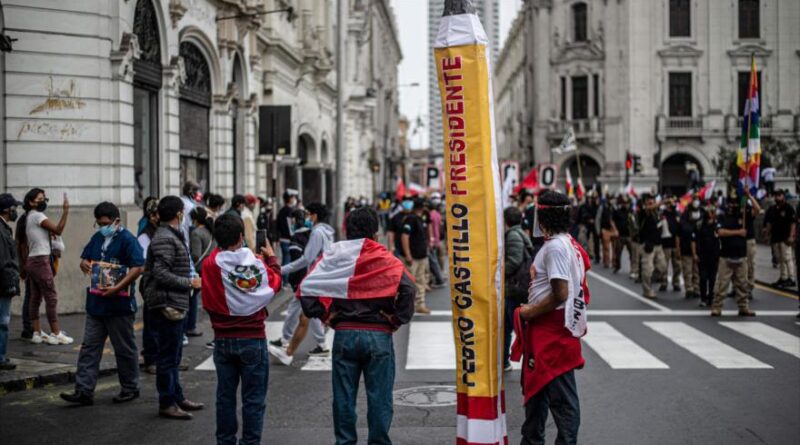 Pedro Castillo’s Perú Libre called on Peruvians to stand up to the illegal decisions that the National Elections Jury is adopting as the end of the count was reached.

The National Jury of Elections (JNE) of Perú decided earlier today to extend the deadline for requests to annul the voting records of the presidential elections to be submitted, extending the limit established by the electoral regulations by 48 hours. The period for submitting such requests had already expired at 8:00 p.m. local time on Wednesday.

“The people must rise up,” stated the Twitter account of Perú Libre , the party of the leftist candidate Pedro Castillo, regarding the decision.

The last-minute maneuver launched by the Peruvian establishment to impede the victory of Pedro Castillo, and to delay conceding victory to the evident winner, has caused confusion worldwide. Many Latin American presidents and former president have already publicly congratulated Pedro Castillo for his victory and are calling him the president-elect.

In the same post on Twitter, Perú Libre wrote that the JNE had “changed the rules of the game at the last minute” because the result of the election was not favorable to his opponent Keiko Fujimori, right-wing candidate of Fuerza Popular. In addition, Perú Libre hinted that the change of regulations was prompted by the Cuellos Blancos (white collars) mafia whose infiltration of the justice system was revealed in 2019, and to whom Fujimori allegedly has links.

Peruvians went to the polls this past Sunday to elect their next president, choosing between two opposite poles represented by Castillo and Fujimori. According to the latest data presented by the National Office of Electoral Processes (ONPE), with 100% of the records processed Castillo had a voting share of 50.17% against Fujimori’s 49.83%.

RELATED CONTENT: Pedro Castillo: The Man from Peru Made Invisible

The ONPE processed all the minutes, and it remained only for the Special Electoral Jury (JEE) to resolve the observed minutes to reach 100%of the recorded minutes, thus providing the final results. At the moment, 99.61% of the electoral records have been counted.

Fujimori and various members of Fuerza Popular have already insisted that a fraud took place, without presenting any evidence.

The JNE, in addition to rejecting any allegations of electoral fraud, on Monday stated that these allegations represented a disservice to the nation’s democracy.

The next president of Perú will face great challenges and must take immediate measures to combat the coronavirus pandemic, an economic recession, and political instability, with a fragmented Congress and widespread corruption. In addition, the president will inherit a politically polarized population.

Featured image: Supporters of the Perú Libre candidate, Pedro Castillo, protest in front of the headquarters of the National Elections Jury, Lima, June 9, 2021.