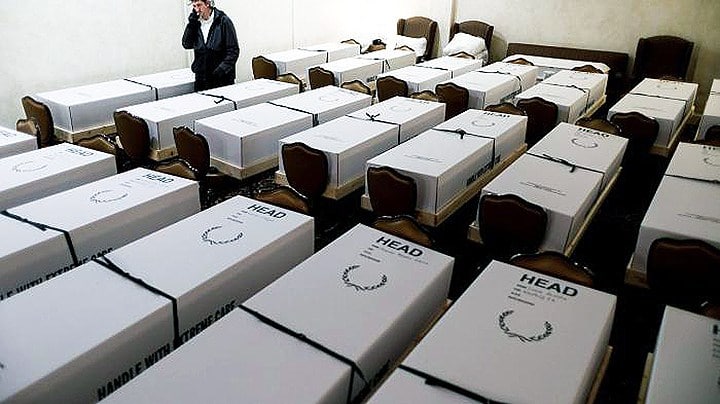 The decisive choice of the U.S. government regarding Cuba, in the setting of the COVID pandemic, was categorical: to take advantage of the inevitable universal spread of the virus to increase the effect of the economic blockade, hoping thus to increase the shortages and suffering of the Cuban people.

In moments like this, when calls for solidarity and cooperation come from all corners of the planet, Washington is counting on illness, virulent spread of disease, the anticipated deaths, and the worsening of economic difficulties in Cuba to be its opportunistic allies.

Rather than dedicating the resources and professional and scientific talent that the U.S. has in abundance to the task of saving its own population from the spread of disease, death, and disastrous consequences for the economy and employment, the U.S. government has resolved itself to penalize those who are more successful in confronting the pandemic, although with far fewer resources. Meanwhile, the richest and most powerful country has, through absolute political negligence, ended up in the completely unjustifiable position of being the epicenter of the pandemic.

According to recent declarations from those in the State Department who are responsible for Cuban affairs, their current policy consists of restricting sources of income for Cuba and forcing the population to suffer even greater shortages – with the aim of presenting these as defects of our economic and political model.

They concede without any shame at all that they have unleashed a campaign of defamation against the international medical cooperation that we offer. It is a campaign supported by threats and blackmail against countries that request and receive our cooperation. They also boast of discouraging travelers to decrease the legitimate profits of the tourist industry. However, these actions do not begin to describe more than a tiny fraction of the persistent and oppressive economic warfare that we Cubans suffer from.

In the context of electoral opportunism and the emphasis placed on the relative importance of the state of Florida, the White House seasons its offensive with an intense campaign of propaganda intended to arouse feelings of hatred and resentment, with illusions of revenge among certain sectors of U.S. citizens of Cuban ancestry, whose votes they are trying to capture.

With the backing from funds accounting in the millions and with intensive use of social media and propaganda laboratories, the mass media in the U.S. goes out of its way to present Cuba as a non-viable country, decaying, and with wide-spread misery – which is strangely still deserving of ever more hostile actions to ensure that the desolate panorama they present should become reality. To undertake an aggression this ambitious, imperialism feels obligated to resort to lying in the most shameless and absolute fashion. This is not something foreign to their nature, since it is part of the traditional style of politics in that country, and a particular component of its attitude toward Cuba in a shared history extending all the way back to the end of the 19th Century.

The U.S. does not have the right or the moral authority to propose to interfere in the internal affairs of Cuba. In collectively punishing the population of Cuba with its coercive economic measures, it is committing a crime. It is violating International Law and the sovereignty of third countries when it imposes restrictions on the commercial activities of businesses in those countries that wish to trade with Cuba, and it violates the human rights of numerous countries when it uses threats and reprisals to try to block those countries from accepting the international medical cooperation that Cuba offers to attend to the health care needs of their populations.

The paradox that has emerged from this sick tenacious campaign against Cuba is that, as it tries to cause the collapse of the country and undermine the authority of the Cuban solidarity effort, it has in fact demonstrated the strengths of the socialist system for more than six decades.

No one could honestly deny the enormous impacts that the economic blockade has had on daily life and economic development in this country. The UN annually publishes a surplus of data to define the extent of the damage.

We have often asked – and not rhetorically- what other relatively small nation, underdeveloped and with scarce natural resources, could possibly have endured more than six decades of the battering of such sustained and unequal economic warfare. This would be a valid question even for many industrialized countries.

The socialist system, as we understand it, construct it, and defend it in Cuba is not perfect, just like all human efforts.

In confronting the pandemic, it has shown its undeniable strengths. These are principally based on the profound humanity of a model that places above all other considerations the well-being of individuals and the population as a whole, social justice, and the right to live entirely free of foreign control.

Cuba has the capacity to mobilize the nation to carry out a vital task, with the advantage of having spent decades prioritizing the development of a robust health system accessible to absolutely everyone, and the development of our own educational, cultural and scientific powers, with results of universal scope.

Without these advantages, which are only possible under socialism, Cuba would not have the favorable results recognized today in control of the spread of illness, recovery of patients, the relatively low death rate, and the ability to come to the aid of other countries. Without these achievements, the cost in lives, illness, and economic shortages would be devastating, just as it has been for other countries in the region. The central goal of the political, economic, and social system of Cuba is to achieve the fullest and most complete justice and try to share this with other nations to the extent that this is possible.

The emergency of the pandemic has forced us to accelerate the implementation of fundamental economic and social changes foreseen in times of less pressure, but all designed to strengthen, update and increase the efficiency of our socialist system.

We would prefer to launch these transformations in a peaceful environment, but we are forced to creatively apply them in the context of very severe aggression directed against us.

Without socialism, it is impossible to explain the demonstrated Cuban ability to defend its sovereignty over the last 62 years against the historic challenge of U.S. imperialist aggression and against the tendency of politicians in that country to suppose that they have the right to control the destiny of the Cuban nation.

Astute observers of Cuba should ask themselves what motivation could possibly exist to convince Cubans to humble themselves under the imperialist insistence of the ambitious neighbor that attacks us.

The U.S. has, and will have, without any right to do this, the ability to severely penalize us, to create immense economic difficulties, to impose huge obstacles to our legitimate aspirations of development and well-being. It can create obstacles to what should be the natural links between our two countries that may be difficult to overcome. It also has the power to impose extra-territorial domination on other countries to force them to carry out coercive and illegitimate economic measures against Cuba. This has been demonstrated.

But it has also been proven that the U.S., with all its wealth and power, does not have the ability to crush the will of this nation. Their cruelty even carried to extremes, does not have any possibility of making us renounce socialism or give up even the tiniest bit of our sovereign prerogatives and true self-determination for which generations of Cubans have sacrificed during more than 150 years.

We have many disagreements with the U.S., some about bilateral relations and others concerning differing visions regarding regional and international affairs. It would make no sense to try to ignore this. Many of these differences could be the subjects for civilized discussion.

We also have areas of common interests and areas in which it would be advisable for both countries to seek understanding and even cooperation. In addition, the links between the people of both countries have continued to expand in every way that human ingenuity can devise, regardless of inter-governmental relations, and it would seem difficult to put a stop to this reality.

Time will tell if it will become possible to build a constructive and respectful relationship. Our historical experience does not exclude this, but it certainly does not guarantee it.

The willingness of Cuba to find a manner of co-existing respectfully with the U.S, and to attempt to resolve differences through diplomatic channels has been among the most consistent characteristics of the troubled shared history of the last 62 years. This is an aspiration shared by an overwhelming majority of the Cuban people; today this seems distant although not impossible.

Feature image: The US finds itself the epicenter of the pandemic. Photo: Europa Press