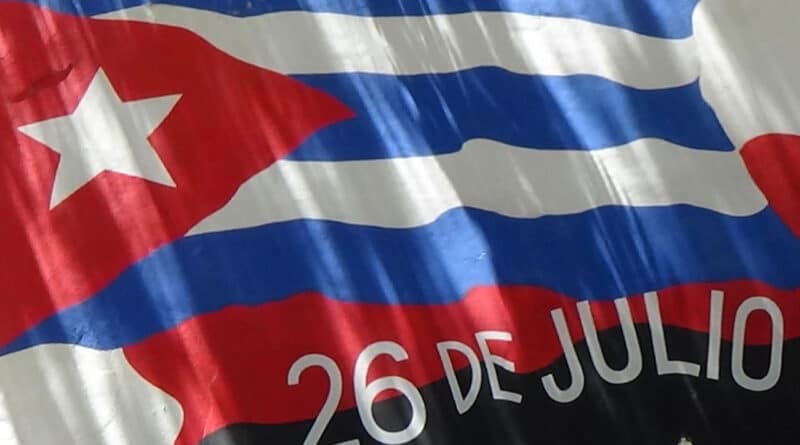 July 26 marks the anniversary of an important event in the revolutionary history of Cuba. On that day in 1953, a group of under 150 rebels led by Fidel Castro launched an attack on the Moncada garrison in Santiago de Cuba that is remembered today as National Day of Rebellion (Día de la Rebeldía Nacional).

Much can be said about details of the attack that attempted to end the dictatorship of Fulgencio Batista. For example, how getting lost in the streets of Santiago may have contributed to the failure of the attack, or about the many revolutionaries who were killed in the attack, while others, including Fidel Castro, were captured and imprisoned. But beyond the historical fact, what is significant to remember is that the popular consciousness that was raised by the Moncada attack inevitably started a process that led to the triumph of the Cuban revolution almost six years later on January 1, 1959.

Remembering this event invites us to notice parallels with another revolutionary process that took place almost 40 years later and changed the political paradigm in Latin America, although, like the Moncada attack, did not succeed at the time.

RELATED CONTENT: An Inside Look at Nicaragua’s Sandinista Revolution on its 41st Anniversary

On February 4, 1992 there was also a failed attempt to take control of the corrupt government of Carlos Andres Perez in Venezuela. Hugo Chavez could not seize the government at that time and pronounced the prophetic phrase “por ahora [for now] the goal has not been achieved”. A phrase that reminds us of Fidel Castro’s reply to his accusers that the Cuban independence hero José Martí was the intellectual author of the Moncada attack. All Cubans who recognised the moral authority of José Martí were alerted to the meaning of the “failed” attack.

Hugo Chavez’s rebellion raised the awareness of Venezuelans and started a revolutionary process that was not only possible, but also necessary. Following his arrest, he later – coincidentally about six years later – changed his tactic to gain political power from an armed rebellion to an electoral victory in 1998 for the presidency of the country. That victory in fact set an example in Latin America.

Comparing memorable events is enlightening because they focus our awareness of the common elements that ultimately highlight the gains within the “failures”. From the active understanding of those events we draw our lessons from the past to be applied in the struggles of the future.

And there lies the importance of remembering historical events. We are forced to pay attention to the context or objective conditions in which those events have occurred, and learn from them.

The relevance of objective conditions

We cannot think of a living revolution as remaining static because that is unrealistic given the changing world around us. Nothing human can be static. Nor can we speak of a revolution as growing because that which grows will eventually get old and die.

We must think of a Revolution as an evolving, transforming or unfolding process constantly in motion. But more importantly, we must believe that evolutionary processes respond to changing contexts. In other words, a Revolution is a process that takes into account the current objective conditions as pointers for the next revolutionary transition. The objective conditions were overwhelmingly in favour of an uprising on July 26, 1953 in Cuba.

Socially, Cuba was under a tyrannical dictatorship with a high degree of political repression, torture, poverty, lack of adequate healthcare and public health, large illiteracy rate, high infant mortality rate. Politically, Cuba had no real independence or sovereignty. The reality was an unrelenting U.S. government interference in domestic affairs to establish puppet governments that favoured its own interests.

The “26th of July Movement” (M-26-7) was founded following the Moncada attack. The Movement fought the Batista regime on both rural and urban fronts. The movement’s main objectives were distribution of land to peasants, nationalisation of public services, industrialisation, honest elections, and large scale education and health reforms.

The objective conditions in Venezuela in 1992 were very similar. The apparent “democratic” presidential elections did not produce any substantial social progress. Therefore Chavez considered that an uprising was justified and necessary. That action captured the sentiment of the majority of Venezuelans and became a catalyst for the consolidation of the Revolutionary Bolivarian Movement 200 (MBR-200) that was founded in 1982, and that became the Movement for the Fifth Republic party (MVR) in 1997. Under the MVR Chavez participated in the electoral process in 1998 that saw him elected president of Venezuela.

Venezuela has undergone many challenges vis-à-vis the U.S. empire in order to defend the Bolivarian Revolution and its social gains. It is succeeding socially and politically while it is struggling economically because of U.S. crippling unilateral illegal coercive measures and financial blockade.

Today, having neutralised the rampant rightwing violence, and with Nicolas Maduro as the reelected president on May 20, 2018 Venezuela continues building a socialist anti-imperialist society by strengthening its Bolivarian Revolution with Chavismo.

But returning to the situation of Cuba, this is a country with no major natural resources, and with almost 60 years of a devastating U.S.-inflicted blockade, that has managed to resist the empire and is today a more politically confident country. That is when we know that resistance and persistence work.

Following a period of hopeful expectations with Barak Obama and Raul Castro reopening diplomatic relations in 2014, some observers thought that a new era was about to begin. But many knew very well that the U.S. government never gave up the intention of a regime change in Cuba. That finally became evident under president Donald Trump whose administration withdrew most of the concessions that Obama had made and allowed Title III of the Helms-Burton Act to be implemented for the first time.

Cuba today is still under a tight U.S. blockade and the Cuban revolution is just as strong with its new president Miguel Diaz-Canel following historic revolutionary figures like Fidel Castro and Raul Castro. Cuba and Venezuela maintain a close relationship.

Cuba’s economy is performing well considering the blockade and the current coronavirus global pandemic. Cuba maintains the social achievements, and continues to provide a great service with its medical missions, which have provided valuable support in fighting the COVID-19 pandemic in dozens of countries in the world, including Venezuela.

The anniversary of Cuba’s National Rebellion Day is an opportunity for reflection on two close friends, Cuba and Venezuela, that have undertaken separate socialist revolutionary processes in Latin America. As observers and analysts we see two countries at different stages of their revolutionary process. One is not be better than the other. They only reflect their respective objective conditions.

If there is any lesson to be learned from remembering historical events like the Moncada attack in Cuba, or February 4, 1992 in Venezuela, is that the objective conditions are essential determinants of a revolutionary process. We need to remember that this is also true today and should inspire similar movements.

Determining when the objective conditions are favourable to consolidate a revolutionary process, and the type of revolutionary process at a given time is not an easy task. It requires a deep analysis, prolonged observation, political knowledge, and some risk taking. There will be many confounding factors to distract from the principal social goals. Many of those distractions are manufactured as misinformation precisely by the imperial propaganda. We always need to remain vigilant and alert, and ultimately in solidarity with our fighter friends.

Finally, Cuba and Venezuela remain true to the people. Their current revolutionary processes firmly reflect two things: 1) respect for the legitimate and democratic will of the people, and 2) the determination to remain fiercely socialist, anti-imperialist and sovereign.
OT/NP