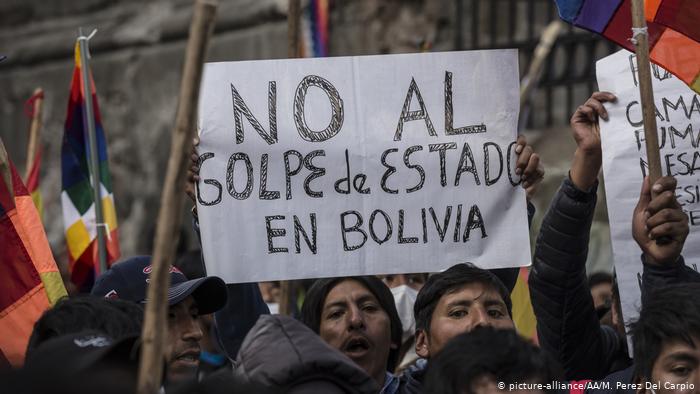 While the social and union movements carry out roadblocks to demand that the TSE respect the electoral timetable, the coup leaders, led by Arturo Murillo, are meeting with Tuto Quiroga, high-ranking military officials, CIA agents and US Embassy officials to plan the strategy that will allow them to perpetuate themselves in power.

Bolivia could suffer a coup within the coup. The consolidation of the intention to vote in favour of the candidate of the Movement to Socialism-Political Instrument for the Sovereignty of the Peoples (MAS-IPSP), Luis Arce, makes the right desperate.

The most reactionary sectors, with the support and leadership of the U.S. State Department, seem convinced that if, less than a year after the coup d’état against Evo Morales, the MAS recovers power, all that has been done will not have been enough.

It was within this framework that the president of the Supreme Electoral Tribunal (TSE), Salvador Romero, using the excuse of the disaster caused by covid-19, announced the suspension (arbitrary and illegal) of the elections scheduled for September 6.

Salvador Romero, appointed as president of the TSE by the de facto government, is quoted in the WikiLeaks as being linked to the U.S. Embassy and the U.S. Agency for International Development (USAID). Furthermore, the Embassy’s own cables describe him as a person with a clear position against Evo Morales and the Movement Towards Socialism.

After the coup d’état of November 10, 2019, the government headed by the self-proclaimed president Jeanine Áñez assured that her stay at the Palacio Quemado (Bolivia’s Government House) would only be temporary and that she would call elections soon. In a framework of repression, systematic persecution and arbitrary imprisonment, the first date established for Bolivians to recover democracy was May 3, 2020. When registering for Election Day, the government, with the complicity of the TSE, banned former President Evo Morales and former Foreign Minister Diego Pary and prevented them from running. Despite this, MAS continued to consolidate, which led the TSE, on the pretext of the pandemic, to propose a new date for the Plurinational Legislative Assembly on 2 August. The TSE again requested the suspension of the election date and the Assembly set September 6 as the deadline.

In this context, the government attempted by all possible means to remove the legal status of MAS and outlaw its candidate, Luis Arce, in a desperate move to prevent the Movement to Socialism from once again leading the destiny of Bolivia.

It was within this framework that the president of the TSE announced a new suspension of the elections and set a new date for October 18. Romero’s decision is not only arbitrary, but also illegal, given that the question of whether or not to suspend the elections is not an attribute of the Supreme Electoral Tribunal, but rather a decision that corresponds to the Plurinational Legislative Assembly, which was not consulted on this occasion.

As a response to this arbitrary and illegal decision, social movements, peasant organizations and unions announced a plan of struggle that began on Monday, August 3, with roadblocks in key points of the country.

Led by the Bolivian Workers Central (COB), the different groups demanding that the electoral calendar be respected carried out roadblocks in 75 points in five of Bolivia’s nine departments (La Paz, Santa Cruz, Cochabamba, Oruro and Potosi). In several of these points, the police cleared the blockades with tear gas.

The TSE turned a deaf ear to the popular demand and, on the same day, Salvador Romero ratified the postponement of the elections.

The government launched both political and judicial persecution against the protesters. Former President Evo Morales tweeted: “We denounce to the international community that the de facto government has initiated political persecution against the Executive Secretary of the Bolivian Workers’ Central (COB), Juan Carlos Guarachi, and the Head of the MAS-IPSP Deputies’ Bank, Betty Yañiquez. We will defend union and political rights”.

The desperate attempts to outlaw MAS and its candidates and the repeated suspension of the elections consolidate what was denounced in a journalistic investigation by the Behind Back Doors website, in an article titled: “Red September for Bolivians. New military coup plan against the institutions“. Before November 2019, this site had exposed audios that revealed the plot of the coup d’état, as described in the article “The civil plot of the overthrow of Evo Morales,” written by journalist Gustavo Veiga and published in Página/12.

On this occasion, the same website reveals that the impossibility of the de facto government to perpetuate itself in power through elections, and the consolidation of the intention to vote for MAS has “awakened the idea of a military self-coup in the most radical groups”. According to the investigation, “once again, high-ranking Bolivian military officials, with the support and advice of the U.S. Intelligence Services, are organizing the maneuver to bypass the constitutional order”.

“Despite the participation in this plan of several of the people who participated in the November coup d’état, such as Luis Fernando Camacho , Samuel Doria Medina , Jorge Tuto Quiroga and Manfred Reyes, the key figures in this plan are now the Secretary of Government, Arturo Murillo, and the Secretary of Defense, Fernando López, who was in fact responsible for recruiting the military assets to remove Evo Morales from the presidency, and now would perform this same function, although based on different interests,” the article states.

The researchers point out that “as is easy to assume, this group does not function autonomously. The instructions and funding come again from the U.S. Embassy in La Paz […] Therefore, Rolf Olson , a CIA official who participated in the previous November events, has been organizing and directing every action included in this plan. Through his diplomatic cover as head of the Political Office, he has been meeting ‘in secret’ with the parties in charge of its articulation”.

“Among the confidential documents consulted (some belonging to the US Embassy), sources located near the Secretary of Government, Arturo Murillo, describe the development of these secret meetings held on July 2, 11 and 14 of this year, where agreements were adopted for the final implementation of the plan. These meetings took place in the house of former President Tuto Quiroga and in the headquarters of the Presidential Palace,” the investigation notes, and then points out that “the main objective of this plan is to postpone the elections until 2021, presumably in October, saving time to reconfigure the electoral forces (to strengthen the coalition and to weaken Carlos Mesa, the candidate of the Comunidad Ciudadana political party), as well as to ‘legally’ deactivate the MAS and comply with the commitments to the U.S. government.

The de facto government and the Embassy are evaluating three possible scenarios to perpetuate themselves in power: suspending the elections at least until next year to allow the right to reorganize, an action that would have the support of the secretary general of the Organization of American States (OAS), Luis Almagro, and the consultant to the secretary of the Bolivian Mission to the OAS and collaborator of the CIA, Erick Foronda Prieto (who would already be in Washington articulating this plan); the creation of “false positives” or “false flag” attacks that would be attributed to MAS so that it could later be declared a “terrorist” group and outlawed; the self-coup. On this last point, the exhaustive investigation gives names of the high-ranking military followers of the de facto government who could take part again in a coup (among them, Sergio Orellana Centellas, commander general of the Armed Forces; General Pablo Arturo Guerra Camacho, head of the Air Force Headquarters; Ciro Orlando Alvarez Guzman, commander of the Air Force; Brigadier General Rubén Salvatierra Fuentes, commander of the Army; and Rear Admiral Moisés Orlando Mejias Heredia, commander of the Navy), also points out that there would be support from the paramilitary groups Juventud Kochala de Cochabamba and Resistencia de La Paz.

The U.S. Embassy, the CIA, the military, and the coup leaders in the Palacio Quemado are all thinking about how to remain in power. The people, in the streets, are trying to recover democracy. Time will tell who wins this struggle.