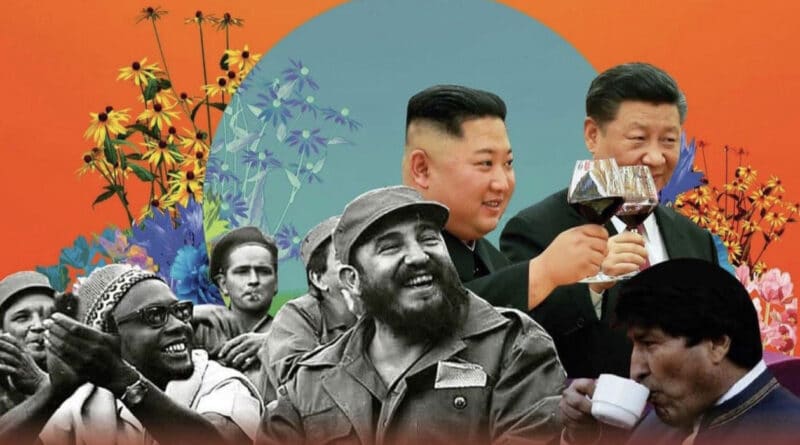 In the last year, the imperialists have had both one great defeat and one great victory. Last fall in Bolivia, the indigenous movement overpowered the CIA-installed coup regime and forced through an election which brought the country’s socialist party back to power, losing the international bourgeoisie control over Bolivia’s Lithium and destroying the strategic military advantage Washington was trying to build up around Venezuela. But then last month in Ecuador, the imperialists used their CIA-backed “leftist” factions to divide support for the country’s anti-IMF candidate, reinforcing imperial control over Ecuador and continuing the reactionary trend that’s driving the country’s people into miserable austerity amid the pandemic.

These are very mixed results. But they’ve also helped us understand the fact which will be the US empire’s undoing: at a certain point, the masses within the vast majority of the world’s nations will rise up against the imperialists. Mao predicted that 90 percent of the world’s people will eventually come to defy imperial control, because the imperialists insist on running roughshod through their global exploitation and unwelcome military presence. This, he believed, will therefore provoke the wrath of those they try to stomp over. And the people of Ecuador, like the people of Colombia, India, and the other US neo-colonies, are only in an earlier stage in their development towards anti-imperialist victory as compared to the people of liberated countries like Bolivia.

I’ve often talked about the theory from the Indian Marxist Saikat Bhattacharya, who thinks that the rising global inequalities of neoliberalism have pushed the world to the brink of a new wave of socialist revolutions. Bhattacharya’s predictions have provided me with great hope, as they should; the evidence behind them is sound, and already we’ve been seeing an escalation of global class conflict in recent years which precludes the first of these coming revolutions.

But it’s also important to recognize the practical limitations which are slowing down the coming of these revolutions in Latin America especially, and which will continue to slow them down until conditions dramatically change. Two years ago, Bhattacharya described these obstacles:

Due to its struggle with US imperialism, revolutionaries need support from petty producers. If a country remains weak in the appropriation of petty producers…massive investment in basic infrastructure of human capital and physical capital becomes difficult as well. When basic infrastructure remains weak, developing productive forces and moving up the ladder in the global supply chain becomes impossible. Thus raw material export becomes the only source of earning foreign exchange for these countries. Thus the Middle Income Trap [where a country which comes to a certain income level gets stuck at that level] becomes permanent…as the Middle Income Trap will keep GDP per capita stagnant and thus equal sharing of a stagnant income may become an urgent necessity with popular politics. Economic inequality is acceptable only when the entire economy keeps growing. The Middle Income Trap ironically may help revolutionaries from this perspective. Hence we can conclude that the Latin American revolution will be long term, slow and discontinuous.

RELATED CONTENT: Eternal War and Austerity: The Hell that Imperialist Propaganda Demands us to Accept

The rise of China as a trading partner within Latin America is one variable which can help shake this persistent grip that neo-colonialism holds over the region. But as Bhattacharya assessed, for now we can’t expect more than the inconsistent pattern of victories and defeats that the anti-imperialist movement has been experiencing throughout Latin America’s last couple years of intensifying class struggle. The 2019 coup has been reversed in Bolivia, and the Chileans have managed to make their government scrap the Pinochet constitution, but also during the last two years Bolsonaro has strengthened Brazil’s forces of militaristic counterrevolution and the anti-imperialists have been successfully sabotaged at the ballot box in Ecuador.

One factor that could set off the wave is a sudden weakening of Washington’s global economic grip, which could happen within the next decade. Bhattacharya only meant that the Middle Income Trap has become “permanent” for the neo-colonies insofar as it will exist for as long as Washington remains economically dominant over the Global South, and that “The Latin Americans may face the Middle Income Trap for a few more years until US importance in the global economy is further eroded.”

This erosion could come with the crash of the dollar, which is being foreshadowed in the dollar’s decline in value throughout the last year. And the contradictions of US capitalism have grown so obvious that even the rightist American financial commentator Peter Schiff believes a dollar collapse is on the horizon, having tweeted last month that “A boom in consumer and government spending that must be met with imports rather than domestic production is not a booming economy. It reflects reckless monetary policy and foretells an economic bust lead by a dollar crash. Consumer prices will soar as living standards collapse.”

What does this mean for a country like Colombia, whose neo-colonial government has been massacring protesters and whose workers have just gone on strike in response to their government’s cruel neoliberal policies and shocking repressive violence? It means a destabilization of the power structures that are keeping the proletariat within the neo-colonies from winning a people’s war against their governments and establishing workers democracy.

For as long as the imperialists have the productive basis to support these structures — IMF loans that keep the neo-colonies in debt slavery to the imperialists, vast military expenditures for waging global wars against the anti-imperialists, CIA propaganda warfare and political assassinations that keep governments aligned with Washington, US financial hegemony that allows Washington to enact devastating sanctions against disobedient countries — they can still use military occupations and CIA intervention tactics to extend their control into even the most unstable countries, whether Honduras or Libya. But when the imperialists lose that economic advantage, their ability to hold back the forces of global class struggle will also be diminished. And the global economic collapse that correlates with this imperial decline will at the same time provoke the global masses towards escalating their efforts towards class struggle.

It’s in their desperate efforts to retain control over the neo-colonies amid capitalism’s last half-century of unprecedentedly declining profits that the imperialists have unleashed their brutal tactics upon Latin America: coups that have resulted in dictatorial regimes like the one in Honduras, paramilitarism that’s produced ethnic cleansing like the anti-indigenous massacres in post-coup Bolivia, terrorism against the working class like Colombia’s ongoing killings of protesters, free market fanaticism that keeps up profits up by foisting the system’s crises onto the poor. At a certain point, these neo-colonies will reach the tipping point which the imperialists have long feared. At a certain point, they’ll undergo the same kind of collapse for bourgeois control that Cuba experienced prior to its revolution.

That the US empire and its neo-colonial governments will undergo great destabilization in the near future isn’t in question. This fact is as obvious as the climatic catastrophes which will shrink the US military’s global reach and make the world’s poorest countries into failed states. What will decide whether socialism rises from the ashes of the empire, or the international bourgeoisie manages to stave off the next wave of revolutions, depends on the organizational and military strength of the world’s proletarian movement.

In Colombia and Ecuador, the movement’s progress in the last several years has also been discontinuous and full of costly setbacks, with the Colombian government having killed around 700 members of the Marxist-Leninist guerrilla organization the National Liberation Army in 2020. Colombia’s military is also likely to expand its territorial reach by the end of 2021. However, the Army still has 2,500 armed members, who have only been engaging in a ceasefire during the last year to reduce the damage from COVID-19. And they and their fellow communists around the globe will spring into action when the conditions become right for them to do so. Maybe these recent reactionary turns by the Colombian and Ecuadorian governments will even inspire more people to join the guerrillas. The imperialists are slowly tightening the noose that will be used to hang them.