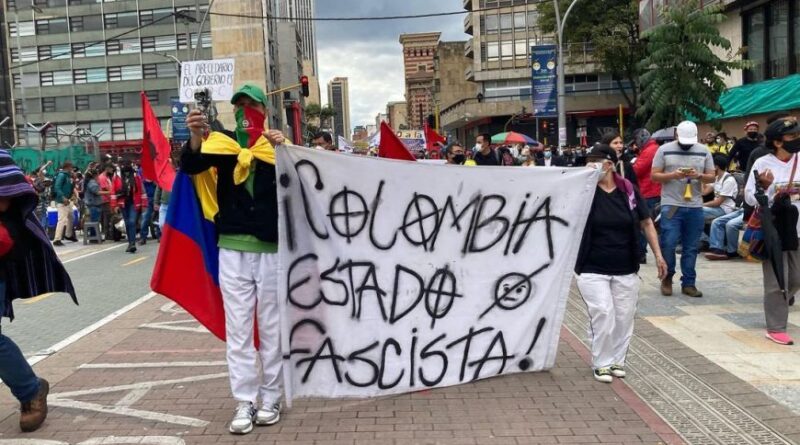 For the past week massive uprisings in Colombia have captured international attention. The scale of the unrest has been so large and vocal that long-time allies to the Duque regime have been forced to speak up. The US released a statement saying “citizens in democratic countries have the unquestionable right to protest peacefully” but that “Violence and vandalism is an abuse of that right.” After claiming that the protesters were guilty of some of the violence they then stated “we continue to support the Colombian government’s efforts to address the current situation” and that they trust that Duque’s regime will investigate reports of police violence.

The latest uprisings in Colombia are a result of the Sustainable Solidarity Bill, a bill which would raise taxes on food and incomes. An example of how this bill would hurt the poor is given by Diaspora Tribune: “someone who makes 3.5 million COP (Colombian Pesos) per month (around $966), who currently would pay no income tax, would pay roughly 1.3 million COP per year ($359) in income tax after the passage of the reform.” This bill was withdrawn by Duque on May 2nd but he still insists on passing some sort of tax reform bill to aid the Colombian economy in the middle of a crisis. However, even after this bill was withdrawn protests continued beyond May 2nd signalling that the uprising intends to deal with issues deeper than a single tax bill.

To understand why let’s look at some of the recent events in Colombia starting with the pandemic. The Colombian economy right now is in shambles due to the global pandemic and subsequent lockdowns. Last year the Colombian finance ministry estimated that the economy would decline by about 2%, but later revealed that it actually declined by about 7%. To highlight how serious this contraction (decline) is we can compare it to what economists were saying was Colombia’s worst economic decline in a decade in 2009, when the economy was contracting at a rate of about .5%. What does this economic recession mean for the average person? High unemployment and inflated prices on essential goods are two results which are also some of the main causes of the most recent uprisings.

But there’s more to this issue than a recent tax bill. There is also the unending state sponsored violence against everyday civilians, not just militarized guerillas, but peaceful social leaders, campesinos, Indigenous, and activists. In March of 2021 the Colombian state bombed an alleged FARC encampment which resulted in the deaths of 14 individuals, 12 being teens and children, the youngest only 9 years old. In August 2020 there were 46 people killed in 10 massacres. The first few months of 2021 saw over 3600 Indigenous report violations of their human rights. Over this last week, over 120 have gone missing and over 40 have been murdered. This violence is only a fraction of what is witnessed by Colombians as tens of thousands have been killed in the last 2 decades funded largely by the US and UK.

The current economic problems coupled with the history of right-wing state terrorist violence against the civilian population has culminated in the uprising we are witnessing today in Colombia. Some people are peacefully protesting others are up in arms, both have legitimate reasons to be on the streets demanding Duque be removed from office.

Given the international spread of the pandemic followed by an international collapse of the global economy, Colombia is not alone in its uprising. Here in the West we hear about how much US and Western European nations are struggling, but as Maurice Bishop, a Black revolutionary from Grenada, said “When the capitalist world catches a cold, we catch pneumonia.” The decline of Western imperialist economies trickles down to dependent Global South economies who suffer even worse fates.

Hence we see, at the same time as massive Colombian protests, Palestinians resist the ongoing expansion of Zionist settler-colonialism in Sheikh Jarrah, an expansion meant to improve the Israeli economy and appease the Zionist colonizers. We see Puerto Ricans taking to the streets demanding an end to ongoing femicides which simultaneously addresses la junta’s failure to provide money for services that the people desperately need, and the colonial government’s traitorous decisions to do the same in their defunding of domestic violence shelters. Despite no longer being in the mainstream Western media, protests continue among Indian farmers fighting against neoliberal agricultural laws that threaten their livelihoods. Haitians continue to take the streets over corruption, theft, and state-violence against the dictator Jovenel Moise. And finally in the US we see continued Black led protests against similar state-sanctioned violence targeting Black communities through an occupying army otherwise known as the US police.

The global capitalist-imperialist crisis has forced the Global South to be up in arms demanding a change to centuries long brutal exploitation. The mainstream media and even left-wing alternative media have gone silent on some of the movements such as those in India, Haiti, and the US despite the fact that people are still in the streets. Rather than let our solidarity and support for the movements be merely a fad, now is the time we must show real solidarity to these movements that transcends rhetoric, platitudes, and performance and actually makes a material difference in aiding the people risking life and death for their families, communities, and nations. Our solidarity must exist not only when the crisis is at its worst, when the people are massacred, but also when they resist, when the media spotlight is not on them and when the eyes and ears of the world have shut the cries of the oppressed out.