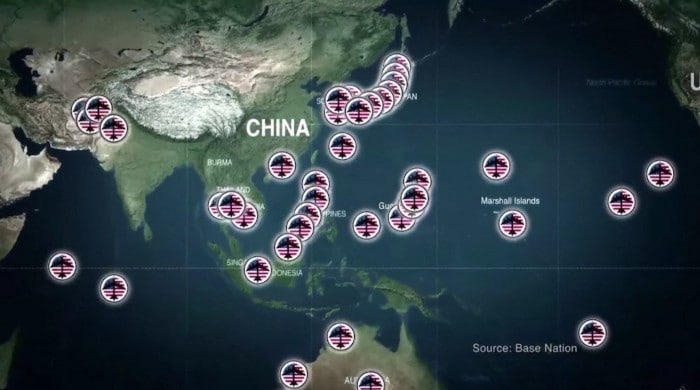 One of Washington’s biggest strategic mistakes in the last couple of decades has been to respond to the rise of Russia and China not with pragmatic diplomacy, but with cold war belligerence. Economically, this course of action has ended up making the U.S. more isolated amid its increasing cutoff from these two growing superpowers. And militarily, it’s ended up weakening America’s global primacy by strengthening China’s ties with its military allies.

This wasn’t how Washington anticipated things would happen when Obama began his “pivot to Asia” strategy in 2012. The strategy’s proponents portrayed it as a “rebalancing” of military power in the region, implying that Washington was expanding its military presence there out of pure necessity and not as an act of aggression against China. But the Congressional Research Service, which sought to propagate this narrative about Obama’s move, worried that “the perception among many that the ‘rebalancing’ is targeted against China could strengthen the hand of Chinese hard-liners. Such an impression could also potentially make it more difficult for the United States to gain China’s cooperation on a range of issues.”

Unsurprisingly, Obama’s obvious attempt at military strong-arming was perceived by the region’s powers not as friendly but as aggressive. The “Chinese hard-liners,” or in other words China’s defense and economic strategists, have responded to these and other provocations from Washington with defiance. Not with the friendliness that Washington apparently hoped they would respond with. After a decade of U.S. hybrid warfare against China, China has imposed a security law in Hong Kong that limits U.S. interference abilities, threatened to militarily intervene in Taiwan, and made maneuvers in the Indo-Pacific that undermine key parts of Washington’s Indo-Pacific strategy. Even four years ago, China was showing its growing ability to defy America’s bullying. Journalist James Petras wrote in 2016 that:

Washington’s entire ‘pivot to Asia’ has centered its vast military build-up on its access to the Philippines. This access is now at risk. Newly elected President Rodrigo Duterte, who succeeded Aquino in June 2016, is pursuing an independent foreign policy, with the aim of transforming the impoverished Philippines from a subservient US military colony to opening large-scale, long-term economic trade and development ties with China and other regional economic powers. Duterte has openly challenged the US policy of using the Philippines to encircle and provoke China.

By the end of the Obama era, Washington had also been forced to abandon its attempted Eurasian economic power grab the Trans-Pacific Partnership, America’s outdated military base strategy in the Indo-Pacific was on the verge of imploding, and Southeast Asia and the South China Sea had stopped being pieces in Washington’s geopolitical chess board. This made it so that in 2017, the neoconservative think tank the Carnegie Institute warned that “the problems posed by China in the Indo-Pacific derive fundamentally from its growing strength, are likely to be long-lasting, and if countered inadequately could result in a dangerous strategic ‘decoupling’ of the United States from the Asian rimlands.”

It’s been the Trump administration’s reaction to this growing Chinese influence that’s further made Washington’s Indo-Pacific strategy backfire. The White House’s strong emphasis on countering China has conflicted with Washington’s simultaneous partnerships throughout the region; the White House’s use of bellicose cold war rhetoric and attempts to persuade Indo-Pacific countries to choose the U.S. over China has further pushed powers like the Philippines to pick sides, which naturally hasn’t helped the U.S. win the Duterte government’s loyalty.

Washington’s increasingly confrontational behavior towards China has also caused India to rescind support for some of its foreign policy goals, with War on the Rocks having observed in 2019 that “the American objective of countering China assigns a supporting role to India that its decision-makers are neither able nor willing to fully embrace, as reflected by public statements from India’s Prime Minister Narendra Modi distancing himself from the U.S. Indo-Pacific approach.” India may act as a military buffer for the U.S. within Asia, but India, the Philippines, and most other powers throughout the hemisphere aren’t willing to provide the U.S. with the tools it would need for a reliable Indo-Pacific military encirclement against China.

It’s for this reason that U.S. military primacy in the Indo-Pacific may well already be lost, as was concluded by a report by the University of Sydney’s U.S. Studies Center from last year which said:

America’s military primacy in the Indo-Pacific is over and its capacity to maintain a favourable balance of power is increasingly uncertain. After nearly two decades of costly distraction in the Middle East, the United States is struggling to meet the demands of great power competition with China and faces the uncomfortable truth that its armed forces are ill-prepared to succeed.

This saga of imperial decline and self-sabotaging belligerence is the context behind the current situation of rising U.S.-China military tensions. The South China Sea has become the place where a confrontation between the two countries is most likely to break out, with Washington now making moves like provocatively dispatching warships into the area. The aggressive shows of military force by the U.S. are only becoming more blatant as the months go by, with Washington having sent aircraft carriers to the Pacific this June after refraining from doing so for three years prior. Washington may not want World War III to break out, but it sees these kinds of risky moves as its only option now that it’s found itself cornered.

So as a U.S. nuclear arms race with Russia and China accelerates, the cold war continually heats up in the Indo-Pacific. Australia, which is Washington’s most reliable ally in the hemisphere, has been boosting its military alongside the U.S. in response to China’s rise. The U.S. is using Australia as an outpost in its propaganda and economic war against China; Australia has offered Hong Kong residents visas amid China’s crackdown on U.S. subversion within the city, and Australia’s economic isolation from China is increasing amid the escalating tensions. Throughout Australia and the other core imperialist countries, the campaign to scapegoat China for Covid-19 is helping manufacture the public’s consent for a long-term cold war.

Despite the aggression and bluster from the imperialists, the world order continues to shift in a multi-polar direction, and the U.S./NATO empire’s belligerent reaction to this continues to ultimately speed up the process of change. The danger is that this will lead to a new world war, one that’s started by what Washington so innocently described as a “rebalancing” effort.
(Medium)