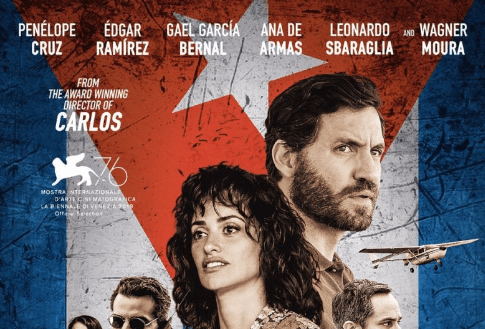 The film Wasp Network, based on the book The Last Soldiers of the Cold War, The Story of the Cuban Five by Fernando Morais, is a co-production between France, Spain, Belgium and Brazil. It was shown in Cuba last December, soon after it came out. You can now watch it on Netflix.

It is not a film on the Cuban Five, and not a Cuban film. It is a story of three of the Cubans who infiltrated the Miami network of terrorist groups dedicated to destroying the Cuban socialist system. The story focuses on Rene Gonzalez, with Geraldo Hernandez receiving less attention. The other three of the Cuban Five heroes, Antonio Guerrero, Ramón Labañino, and Fernando González, are barely mentioned. Nor is their trial, nor their years in US prisons. One other Wasp Network member presents an unsavory character in the movie, Juan Pablo Roque.

Rene Gonzalez said, “The film, as many people have said, is not exactly the story of the Five, it is the story of part of the Five, but it also goes beyond that to the story of the confrontation between Cuba and the United States. It seems important to me that from the point of view of a European, who has no direct relationship with this conflict of so many years, a film has been made on a subject that, during the time in which this story unfolded, was a subject censored by the media of the world. That is the fundamental value of the film.”

While the movie certainly contains some standard anti-communist propaganda, required for “credibility,” it mostly portrays the Wasp Network’s thwarting of the operations of Miami terrorist groups. The Miami Cuban rightwing groups, the Cuban American National Foundation being the most significant, were involved in drug running, hotel bombings and armed attacks in Cuba, and attempted assassinations of Fidel Castro.

Once the rightwing Miami mafia heard news about this content from the movie’s showing at the Venice Film Festival, they threatened to burn local cinemas that showed it.

A review in Granma, the official organ of the Central Committee of the Cuban Communist Party, points out “The Wasp Network (Olivier Assayas, 2019) makes it clear, from historical objectivity, that the Cubans who infiltrated counterrevolutionary organizations in Miami exile had the right to ensure the security of their country, and thus stop the wave of terrorist attacks in the 1990s under the protection of the United States.”

Yet it is not a film that will educate people on the Cuban Five case, or on the long history of US terrorism against Cuba. In fact, no mention is even made of the Cuban Five, let alone who they were.

Not until the movie is half finished do we learn the real reasons for Rene Gonzalez and others “defection” from Cuba. What should have been at most the first fifteen minutes of introduction, drags over the first hour, making the film leave out a great deal about the Wasp Network and the Cuban Five.

You will not know of the frameup trial they were subjected to in US courts. As Rene Gonzalez adds, “This case filled the judicial system, the judge, the jury, the prosecutors with shame, that’s why it’s a story that they can’t tell and that they’re afraid of, and that for so long they hid and tried to let nobody know. They are afraid that the history of U.S. aggression against Cuba, for so many years, will be known.”

You will have to look elsewhere for this information. Start with Freethefive.org, Stephen Kimber’s book What Lies Across the Water (reviewed here) or Saul Landau’s Will the Real Terrorist Please Stand Up.

The film does make clear the US is the aggressor, that Cuba used the Wasp Network to defend itself. It does quote Fidel Castro pointing out “how amazing it was the biggest spy in the world would accuse the most spied upon country in the world of espionage.” Yet the film portrays the Cuban people as victimized not just by the US blockade and Miami based terrorism, but by a Communist dictatorship. At one point the film claims, in response to a “democracy” movement: “The [Cuban government] reprisal was brutal. The Castro regime attacked Concilio Cubano with all its strength. They went all out. They ransacked homes, they attacked people, they imprisoned human rights activists. People who didn’t have weapons. People who only aspired to gather peacefully in La Habana.” No mention is made of this group’s connection to US government’s regime change operations.

If anything, Wasp Network highlights the limits on freedom of speech in the US when we want to make a truthful film about a government the US rulers are trying to overthrow. Oliver Stone faced the same issue seventeen years ago, when he worked with HBO to produce a documentary on Fidel Castro. HBO would not show the result, Comandante, because it was not negative enough. (Canada did show it). The following year, Stone made Looking for Fidel, still available, which met “credibility” standards by including a fair amount of footage with Cuban “dissidents.” Geraldo Hernandez, the leader of the Cuban Five, likewise recognized this de facto censorship when he said, “What I liked most about the film was the boldness of placing the subject of terrorism in Hollywood.” The sixty year US crime against the Cuban people still remains mostly covered up, here in “the Land of the Free.”