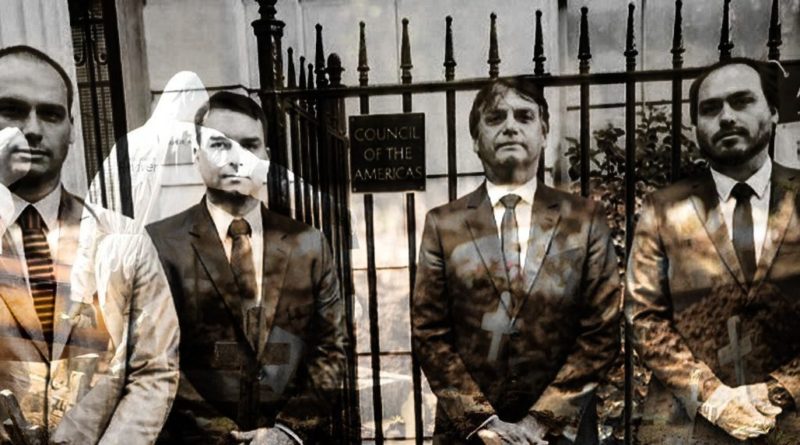 At the time of publication, June 23, 2020, Brazil has just passed the grim marker of 50 thousand confirmed Covid-19 deaths.

Estimates generated from the Notary Public system’s obituary reports suggest that real mortality figures are closer to 85,000, and a nationwide study in which a representative sample of 25,000 people in 90 counties was given Covid-19 tests, recently suggested the real infection rate is 7 times higher than official numbers.

Brazil’s response to the pandemic has been an unequivocal disaster, and it could yet become the country worst hit. When compared to the situation in neighbouring Argentina it is clear that policy and incompetence are much stronger causal factors than chance or the cruelty of nature.

That Bolsonaro came to power on a wave of foreign support, both from governments and the corporations they serve, cannot be ignored.

Those who supported his presidency, and the corrupted anti-democratic processes which put him there, have blood on their hands.

In a 1998 TV interview, Jair Bolsonaro infamously said that 30,000 needed to be killed for Brazil to function. He was speaking in reference to the 1964-85 dictatorship period, which he considers a golden age, but that he complained did not kill enough. He also lamented that his hero, Chilean Dictator Augusto Pinochet, likewise did not murder enough Chilean citizens. If he ever came to power, Bolsonaro said, he would put this right. These remarks, and others similarly disturbing, were public and already well known in 2018. The character of this man was very clear long before he took office.

Yet, with their eyes on Brazil’s riches, his foreign supporters did not care.

As Bolsonaro dog whistled encouragement to his fanatical supporters, murders of Indigenous, LGBTQ+, Peasant, and Afro-Brazilian community leaders accelerated, and lumber companies began hiring chainsaw crews in the Amazon even before he took office. Under the public cheerleading of a previously unknown former judge who rode to the governorship on Bolsonaro’s coat tails, Rio de Janeiro’s state military police alone surpassed the entire number of killings committed by police in the United States.

Bolsonaro once eulogised the United States cavalry for being more effective in their extermination of Indigenous peoples than their Brazilian counterparts. Upon coming to power he quickly initiated a process long threatened, one which will strip them, whom he compared to zoo animals, of their demarcated lands.

This was not only an act of racist revanchism; it would of course also open their territory to exploitation by the same foreign extractive corporations and investors who enthusiastically supported the Neofascist’s sham election.

Now there are miners and loggers, working on behalf of foreign capital, who are not only ripping down protected rainforest at record rates and poisoning rivers with mercury but are intentionally carrying Covid-19 into the heart of protected Indigenous communities. Kayapó Leader Paiakan was one its recent victims, among 332 Indigenous who have officially died from the coronavirus, and 7,208 cases, across 110 tribes with a total population of around 800,000.

In the most resource rich nation on Earth, the mining sector particularly, was in rapture, with the Amazon region a new frontier.

To the international mining, beef, lumber and soy industries, and their puppet in the Brazilian presidency, genocide is just another externality to be ignored in their business models, like climate change.

British Prime Minister Boris Johnson wrote to congratulate Jair Bolsonaro upon his election. The UK’s Conservative Government was in its own words looking forward to working closely with his administration, in particular with Economy Minister, “Chicago Boy” Paulo Guedes.

Behind the scenes the UK Government had been meeting with Bolsonaro, his family, Guedes and other allies for some time.

“It was also recently discovered that various Conservative ministers were meeting Bolsonaro, his family and allies well before he was elected.

Specifically, Freedom of Information requests have revealed details of previously undisclosed meetings and correspondence between British officials and Bolsonaro before, during and after the election campaign, including when Boris Johnson was Foreign Secretary.” Corbyn told inews.

While the UK Government was meeting Bolsonaro, its main media platform the BBC was promoting his supporters, some of them actual neo-nazis, as “a rising tide of young conservatives” who ” seek change”.

Bolsonaro went on to thank Boris Johnson for resisting tough European Union response to the Amazon fires of 2019. Johnson had told Parliament: “Mr Speaker I would be reluctant to encourage any measure now that did anything to reduce trade, and free trade around the world and it’s much much better to support the re-forestation of Brazil in the way that we are.”

The President elect’s idealogical ally, Donald Trump gave Bolsonaro his most enthusiastic congratulations, “the U.S.A. is with you!” he proclaimed. The Brazilian neofascist was quite obviously the Republican Party backed candidate at the 2018 election, but Bolsonaro’s support spread far deeper into the bipartisan corporate world, long excited by the liberalisation of Brazil’s economy that he promised, in particular the prospect of the protected areas of the Brazilian Amazon opened up to exploitation.

In January 2019, Wall Street lobby and think tank Council of the Americas was breathless in its praise of Paulo Guedes and the economic policy of the incoming Bolsonaro regime: “To the attendees of the World Economic Forum: This week in Davos, you will meet a man who seems destined to change Brazil for the better. Brilliant and disciplined, he has put together a truly first-rate team. In just three weeks in office, he seems to have correctly diagnosed what ails the world’s most disappointing large economy of recent years. There in the Swiss Alps, he will present his plan for fixing it; you will likely be dazzled. This man’s name is Paulo Guedes.” enthused Americas Quarterly Editor in Chief, Brian Winter.

Guedes responded to the 2020 Coronavirus pandemic by claiming that his ultra-liberal reforms were the solution. His colleague, environment minister Ricardo Salles, saw the pandemic as an opportunity for accelerated abandonment of regulations protecting the Amazon, while the public was distracted.

With Bolsonaro in barely in office, Council of the Americas member Cargill announced explicit support for deforestation in an open letter to soybean producers in Brazil, and its opposition to environmental protection projects in the irreplaceable Cerrado Savanna biome.

Disregarding any human rights concerns, fellow Council of the Americas member, Barings Bank, could not contain their enthusiasm for the election of Bolsonaro, calling it “a new frontier”. “Jair Bolsonaro’s election as Brazil’s president in October 2018 was momentous: this was the first time since the establishment of the country’s 1988 constitution that a clear right-leaning mandate had won a national vote. Many market commentators have recognized that his appointment has the potential for positive economic transformation,” it proclaimed.

Canadian national public broadcaster CBC responded to Bolsonaro’s election with an article headlined ‘What a far-right Presidency in Brazil means for Canadian Business’: “Brazil’s new president elect, Jair Bolsonaro, is a right-winger who leans towards more open markets. This could mean fresh opportunities for Canadian companies looking to invest in the resource-rich country,” it announced on social media.

In 2013, Canadian Intelligence agencies were found to have spied on Brazil’s Mines and Energy Ministry.

The new goldrush in the Brazilian Amazon, and its political context, were entirely foreseeable. In December 2012, Wall Street Journal ran a piece headlined “Mining Giants Head to Amazon Rain Forest. In Next Five Years, About $24 Billion Will Be Invested to Boost Production in Remote, Environmentally Sensitive Region.”

The Wall Street Journal was unapologetically supportive of Jair Bolsonaro’s Presidency. More recently it even urged an end to quarantine measures in Brazil, further endangering the population.

Eurasia Group founder Ian Bremmer wrote in Time Magazine that Bolsonaro was a “sharp break with a decade of high-level corruption, and Brazil’s best chance in a generation to enact economic reforms”, while clarion of capital, The Economist, emphasised the Neofascist’s “good ideas“. NATO-adjunct think-tank the Atlantic Council also enthused about economic direction of the Bolsonaro regime, excited by the prospects of a free-trade agreement with Brazil under his extreme-right government, and continued their strange fixation with Brazilian pension reform.

As Brazil sinks further into the darkest episode of its recent history, there can be no forgiveness for the foreign state, corporate and media actors who helped enable a human catastrophe, in the name of “free trade”.

Nor should they be listened to about who should govern Brazil once the Bolsonaro nightmare is over.