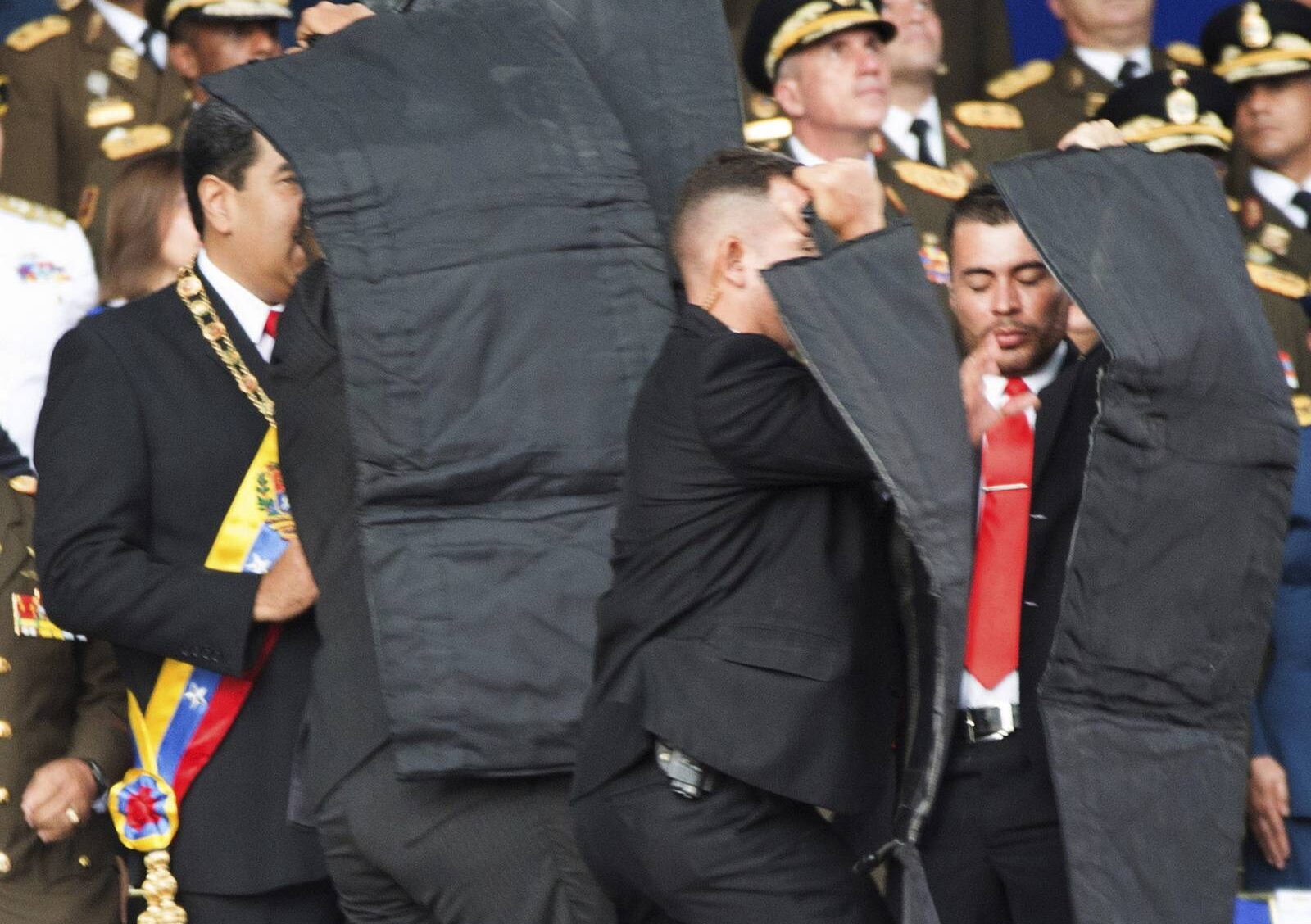 In this photo released by China's Xinhua News Agency, security personnel surround Venezuela's President Nicolas Maduro, at left, after drones armed with explosives detonated as he was giving a speech in Caracas, Venezuela, Aug. 4, 2018.

A few hours after the four-year anniversary of the drone attack against President Nicolás Maduro, the trial of 17 defendants for that act entered its final stage.

The process has been carried out in the First Special Trial Court with jurisdiction in cases related to crimes associated with terrorism at the national level, by Judge Hennit Carolina López Mesa.

These individuals were arrested in August 2018, and charged with treason against the country, qualified intentional homicide attempt committed with treachery for an ignoble motive against the president of the Republic, and terrorism, among other crimes.

The facts
The attack was carried out on August 4, 2018, at 5:41 p.m. on Bolívar Avenue in Caracas, during the central act of the 81st anniversary of the GNB.

At that time, towards the end of the commemorative events, President Maduro took the floor and called on Venezuelan drivers to participate in a census to access subsidized fuel.

“If you want to heed the call of the right and not register in the census, when the new necessary, fair, and balanced policy of internal prices for hydrocarbons comes, you will be left out and you will have to thank Julio Borges, Ramos Allup and company, for their advice,” said President Maduro when the first drone exploded in front of the stage. Just a few seconds later, the president’s security detail covered him with a bulletproof shield, but the event was still being broadcast on publicly owned VTV.

“I am issuing a call to honest, hard-working Venezuelans, to conscious Venezuela: we are going to count on the good of our country, the time for economic recovery has come,” said President Maduro, and then a second device exploded. The cameras captured the astonishment of Cilia Flores, wife of the president. At that moment, VTV cut off the transmission. Subsequently, the soldiers gathered on the avenue broke ranks as fragments of exploded drone rained down on the street.

Two hours later, the then Minister of Communication Jorge Rodríguez issued a statement from Miraflores Palace saying that it was “an attack against the figure of the constitutional president.”

At 9 p.m. on that August 4, Maduro spoke on a radio and television address to accuse the “Bogotá oligarchy” for being behind the attack:

Former Deputy Juan Requesens, one of the 17 defendants, in a recorded confession revealed that the former president of the National Assembly, Julio Borges (PJ), based in Colombia, participated in the preparations for the drone attack.

“I was contacted by Julio Borges, who asked for the favor of transferring a person from Venezuela to Colombia,” Requesens said in that video.

The accusation
On September 28, 2018, the Public Ministry charged 17 people for their alleged participation in the drone attack.

The accusations of the Public Ministry were debated in a preliminary hearing that took place between February 22 and June 11, 2019 before the 1st Special Antiterrorist Court of Control of Caracas. On July 1, 2019, Judge Carol Padilla issued the decision to order the opening of a trial against the 17 defendants.

That trial began on December 2, 2019 and ended on the night of August 2, according to judicial sources. Joel García, Requesens’ lawyer, wrote on his Twitter account at 9:59 a.m. this Wednesday: “Today we will have a sentence.”

The capture of former deputy Julio Borges is pending. Borges is accused of the intellectual authorship for the drone attack, according to judgment No. 49 of the Plenary Chamber of the Supreme Court of Justice issued on August 8, 2018.

In a part of the text of that sentence it is read: “In accordance with the provisions of Article 116 of the Organic Law of the Supreme Court of Justice, the detention of the deputy citizen Julio Andrés Borges Junyent is declared admissible.”