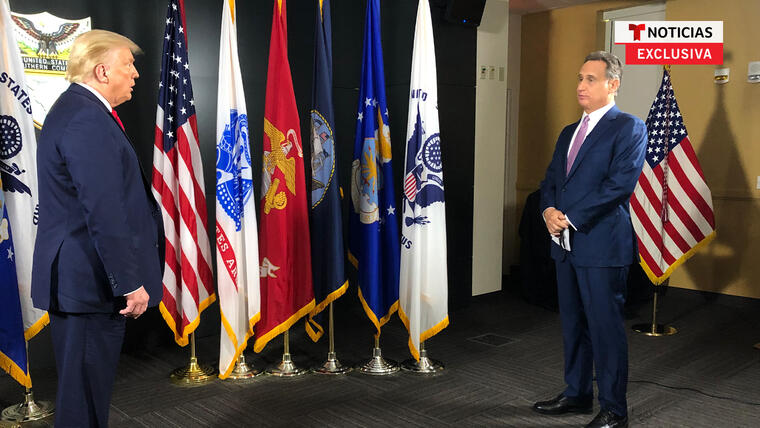 Caracas, July 11 2020.- US President Donald Trump said in an interview with Telemundo that opposition leader Juan Guaidó “is losing some power” and that they want “someone who has the support of the people.”

In the interview, journalist José Díaz Balart asked him if he continued to support Guaidó, to which Trump stated: “I support whoever is elected, and at this moment he seems to be the chosen person, but the system is very bad there. It seems he is losing some power, we want someone who has the support of the people. I support the person who has the support of the people,” without defining what “people” means to him.

Trump stressed that “Venezuela has been treated very, very badly. I have been very strong with Venezuela, this is an area that I know very well. Little Venezuela, they call it in Florida Little Venezuela (referring to Doral county in Florida), the best people there are, fantastic people, we are going to take care of the people of Venezuela,” and maybe Venezuelans in Florida are also taking care of him because they organized a fundraising dinner for him for a cost of almost 600,000 dollars per couple.

Three weeks ago, the US president said, in an interview with the website Axios, that he does not have much confidence in Guaidó, and indicated that he is willing to meet with his Venezuelan counterpart, Nicolás Maduro.

Trump’s words raised strong controversy among the anti-Castro and anti-Chavista community living in the state of Florida, as well as in Venezuelan opposition circles, causing Trump, who is campaigning for reelection, to tweet a few hours later changing the tone of his statements, stating that he would only meet with President Maduro to discuss his departure from power.

His words come two months after a new attempted coup failed, this time an attempted maritime raid with the support of “security contractors” (mercenaries), in which Clíver Alcalá, Leopoldo López and Juan Guaidó were involved with the US government behind them.