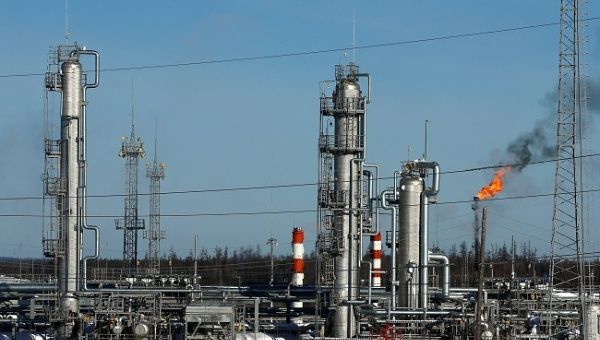 The Trump administration is cracking down on trade partners that are still purchasing oil from Iran in an attempt to force regime change inside the Persian Gulf nation.

The U.S. government is ending the program that has provided exemptions to five large countries purchasing oil from Iran, the New York Times reported on Sunday.

According to the New York Times report, the U.S. is canceling the exemptions to China, Japan, India, Turkey, and South Korea as they attempt to strengthen their blockade on Iranian goods.

The ultimate goal of this U.S. move is to force regime change in Iran by choking off all of their exports and sinking their revenue stream.

Oil prices rallied by about 3 percent on Monday to their highest since late 2018 as the United States was set to announce that all imports of Iranian oil must end or be subject to sanctions.

Last November, the Trump administration announced major sanctions against the Persian Gulf nation, but they would later grant their trade partners waivers so that they could continue their purchases.

Since the granting of these waivers by the Trump administration, the two biggest purchasers of Iranian oil, China and India, have continued to conduct business with the country. Three of the U.S.’ allies, including NATO partner Turkey, have also benefitted greatly from the exemptions.

However, the Trump administration is likely to get heavy pushback from Turkey, who is not only a major trade partner of Iran, but also a close ally in the region.

“We know that the sanctions regime will not really produce the results that they’re expected to produce in terms of changing Iranian behavior,” Ibrahim Kalin, the Chief Counselor to the President of the Turkish Republic, told the New York Times.

This campaign to push for regime change in Iran could turn disastrous, however, as some experts believe the complete blockade of Iranian oil could skyrocket the price of oil this summer.

“Last summer didn’t go above $3 a gallon as a national average, but this summer, if we don’t have Iranian oil we probably do go over $3,” Tom Kloza, global head of energy analysis at the Oil Price Information Service, told NYT.

Analysts criticized the end to the exemptions, which would hit Asian buyers the hardest.

U.S. Secretary of State Mike Pompeo is expected to make an announcement cancelling all waivers on Monday despite the possible economic ramifications that could arise as a result of this move. ​​​​​​​