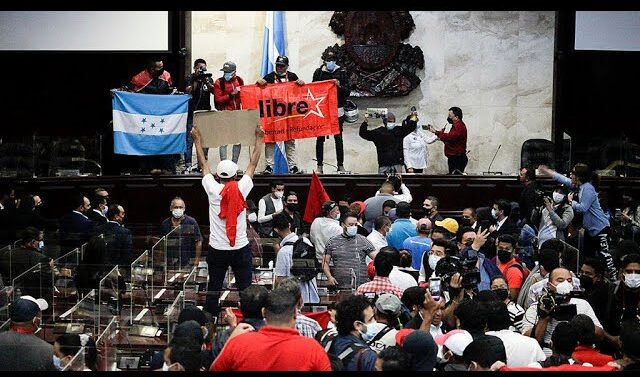 January 23, 2022 (OrinocoTribune.com)—Following the betrayal of 18 members of the Libre party, Luis Redondo and Jorge Cálix were sworn in as presidents of the National Congress of Honduras in two parallel events, leading to a complicated situation in the Central American nation. The betrayal by Libre Congress members and their selection of Cálix violated the political alliance agreed to during President-elect Xiomara Castro’s campaign.

Castro won the elections of November 28, as candidate of an alliance between her Libre (Liberation and Refoundation) party and the Savior of Honduras Party (PSH). As an agreement of the alliance, Libre parliamentarians had promised to support PSH’s Luis Redondo as president of Congress. Instead, on Saturday, 18 members of Libre broke ranks and chose one of the defectors, Cálix, as president of Congress. The betrayal sparked a tussle on the podium of the national assembly, and denunciations by the fiery president-elect and her husband Manuel Zelaya, former president of Honduras overthrown by the military in 2009.

As a result, Castro convened the people of Honduras to an impromptu assembly outside the official seat of government. On Sunday, in a ceremony inside the Legislative Palace, Luis Redondo was sworn in as the Congress president with the approval of 48 parliamentarians—loyalists from the Libre and PSH alliance. Hugo Noé Pino and Angélica Smith, both Congress members from Libre, were sworn in as vice-president and secretary of the Congress, respectively. This meeting was not attended by the 18 defectors in question, who, in a separate event outside the city of Tegucigalpa, elected a parallel assembly.

Subsequently, Cálix and his 17 supporters were expelled from the Libre party by Zelaya, the party’s general coordinator. Castro accused the dissidents of “betraying the constitutional agreement” and of “making alliances with representatives of organized crime, corruption, and drug trafficking.”

The United States embassy in Honduras immediately commented on the situation, urging “political actors to remain calm, engage in dialogue, and refrain from violence and provocative rhetoric.” The irony of these statements was not lost on Latin American observers, in the wake of the fiasco surrounding the most recent US election and the violent storming of the Capitol by supporters of the sitting US leader at the time, disgraced former President Trump.

The US statements, and the last-minute betrayal, set off alarms for those defending Honduras’ political stability. The US has consistently sought to destabilize the country, supporting the questionable elections held by the coup government following Zelaya’s overthrow in 2009, even as Honduras was temporarily expelled from the Washington, DC-based Organization of American States (OAS).

Political analyst and former presidential candidate Olban Valladares said the congressional dispute could be the result of interference by the administration of outgoing President Juan Orlando Hernández, according to mainstream media reports. Hernández’s National Party had controlled the previous Congress with US support. The narco-dictator Hernández received US backing after Honduras’ fraudulent 2017 presidential election, marred by serious irregularities and violence against Libre and PSH supporters. At least 21 people were killed by Honduras military police in the aftermath of those elections.

Zelaya fell into disfavor with the US and sectors of Honduras’ business elite after he promised to convene a Constituent Assembly to rewrite Honduras’ Constitution, similar to what Hugo Chávez had done in Venezuela in 1999. A few months before, Zelaya had agreed to join the Bolivarian Alliance for the Americas (ALBA) regional trade alliance founded by Fidel Castro and Chavez. In addition, Zelaya had ordered a substantial increase to the minimum wage.