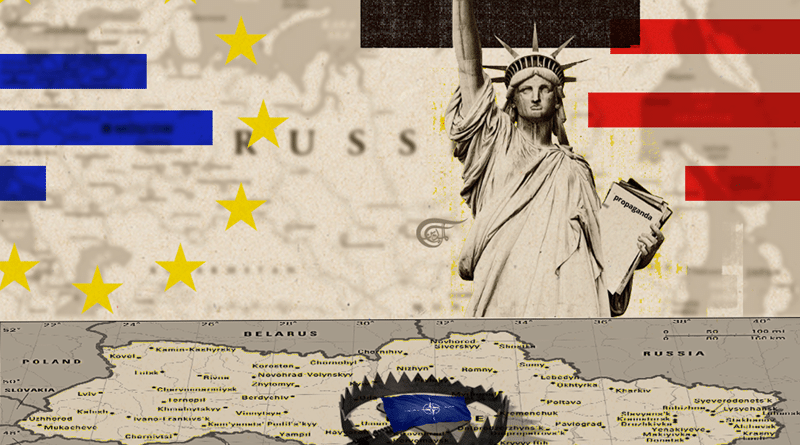 The threat of Ukraine reoccupying the Donbas autonomous regions and the possible massacre of the Russian-speaking Russian citizens of those two breakaway republics forced Putin’s hand.

Well well well, how did we ever end up in this situation? Another war in Europe threatens to engulf the wider region.

The Russians claim to be engaged in a limited operation, to disarm a neo-Nazi-led regime that was ushered into power through the Euro Maidan protests of 2014.

A coup supported financed armed and welcomed by its surrogate parents in Washington and Brussels.

A coup that the people of Donbas and Crimea, who suffered appallingly under the fascist Nazi regime, during World War 2, having watched over 40 trade unionists and anti-Maidan protestor’s systematically beaten shot and burned to death in the Odesa Trade Union building, declared to the world their refusal to live under a fascist installed undemocratic junta.

After eight years of continued shelling by the Ukrainian forces in violation of the agreed ceasefires under the Minsk Protocols, and following the rearming of the Ukrainian nationalist forces to include the neo Nazi Azov battalion and other extreme-right elements, President Biden has been fuelling the violence on the line of contact, to force Russia and Putin into taking a stand.

The threat of Ukraine reoccupying the Donbas autonomous regions and the possible massacre of the Russian-speaking Russian citizens of those two breakaway republics forced Putin’s hand.

RELATED CONTENT: How Ukraine’s Jewish President Zelensky Made Peace with neo-Nazi Paramilitaries on Front Lines of war with Russia

America had set a trap
A bear trap and Ukraine was the bait.

Once Putin the Russian government and their armed forces agreed to move into Ukraine, it’s become an all-in operation.

The poker game is over and everyone is now showing their hand.

America NATO and the EU are standing back hoping the Ukrainian army can hold off the Russian forces while they are resupplied with ever more sophisticated anti-tank and anti-aircraft weapons.

Zelensky has reportedly fled to Poland and is prepared to fight to the last drop of Ukrainian non-millionaire’s blood.

The “special operations ” being carried out by the Russian military assisted by the people’s militia of Lugansk and Donetsk has liberated large swathes of Ukrainian territory from the regime in Kiev.

The winners in this conflict are the  American military-industrial complex.

In their proxy war with Russia – which they have continued since the fall of communism and the Soviet Union in 1991 – they are literally making a killing, in profits.

Selling billions of dollars of weapons to Ukraine to face a threat America had largely created.

The major threat to the American capitalist is not a resurgent capitalist Russia.

The real threat is a resurgent unified Europe.

Under Putin, two decades ago, Russia explored the idea of joining NATO, had that succeeded the war we are witnessing now would never have happened.

America needs a divided Europe in order to remain the global superpower that it is today.

A unified Europe, just imagine for one moment what that could have achieved.

NATO may have very well ceased to exist and the European army that the EU has spoken about for over a decade may have already become a reality.

America set the trap but perhaps they deliberately left Russia no choice?

Having gone into Ukraine, it remains to be seen how they will leave.

Simply disarming the Ukrainian fascists and then leaving Ukraine with Zelensky the American puppet in place will result in events coming full circle, with NATO resupplying Ukraine, we will be back to square one.

If they occupy Ukraine and then hold elections to replace Zelensky a guerilla war in western Ukraine is a distinct possibility.

That leaves a third option and one which may work.

The division of Ukraine.

Russian military units to be on the front line and any aggression from the west to be met with a full Russian response.

I am not in favor of nor do I advocate war.

This war had been coming since Russia under Putin began to stand up to NATO and American forces trying to isolate and marginalize the Russian Federation.

The losers are the innocent civilians in their millions forced to flee both the Russian advance and the Kiev regime shelling of the Donbas.

America has forced a permanent split on the European continent, reinforced its political-economic and military supremacy in the region, and made billions of dollars of profits for its shareholders and its political elite. As a bonus, it has stopped Europe from emerging as a potential economic rival to America.

History has shown Russia to be the graveyard of fascism in Europe and it may fulfill that role once again.

The times we are in are very reminiscent of the years prior to the outbreak of the second world war.

In 1941, Germany declared war on Russia.

They were not alone. Hungary, Slovakia, Finland, Italy, and Romania also declared war on Russia and supplied hundreds of thousands of fascist troops to occupy Russia.

Hungary Latvia Poland Ukraine and Romania among others all have a burgeoning fascist sector whose ideology harks back to Nazi Germany.

This nationalism has been encouraged by America as a hotbed, not for anti-communist rhetoric but anti-Russian sentiment.

Russia is the enemy?

Why? I cannot say.

Russia is run by oligarchs and billionaires just like Europe and America.

It is the elite who have us fighting each other.

The good, the bad and the ugly
This is not a spaghetti western this is real western politics.

Putin,’ the good’ because I believe he is genuinely trying to prevent a massacre in Donbas and protect Russia from Nato aggression.

Biden,’ the bad’ after all, this has all been orchestrated by him and his administration. This is a possible 2nd  Afghanistan all over again for Russia.

They were drawn into the conflict by America only to end up in a Vietnam-type military quagmire.

If Biden gets his way violence will continue in Ukraine while he sucks Europe dry of its wealth leaving its citizens broke hungry and cold.

Zelensky,’ the ugly’ what kind of a leader follows American dictates and allows his country to be torn asunder. Firstly by the killing of his own people in the Donbas who he claims are Ukrainian citizens.

Then he allowed his country to be drawn into a financial meltdown buying weapons of war to build up its army in the absence of building up the economy.

Instead of holding talks to avoid a crisis he killed people in Donbas and threatened them with an invasion.

Russia may well have averted a coming war in Europe by invading Ukraine now before the fascists reached the Russian borders.

Belarus which is still under threat of an American financed destabilization color revolution regime change operation must be on alert.

The capitalist, corporate-sponsored American administration never sleeps, as it tries to maintain its place as the number one superpower.

It stays there by forcing war on its perceived self-selected enemies, selling weapons of war to its allies and demanding a place at the head of the dinner table like some mafioso godfather making the world an offer it cannot refuse.

I will finish with a quote from the former coup leading Ukrainian President Petro Poroshenko (From Sputnik news on 2014):

The most offensive of the president’s remarks, made in a speech on October 23 at Odessa’s Opera House and captured on video, noted that “we [in Ukraine] will have work; they – [in the Donbas] won’t. We will have pensions – they won’t. We will care for our children and pensioners – they won’t. Our children will go to school, to kindergartens – their children will sit in cellars. They don’t know how to organize or do anything. This, ultimately, is how we will win this war.”

8 years later there is open war in the country.

These are the people who do not want peace.

These are the people who want control or complete subjugation.