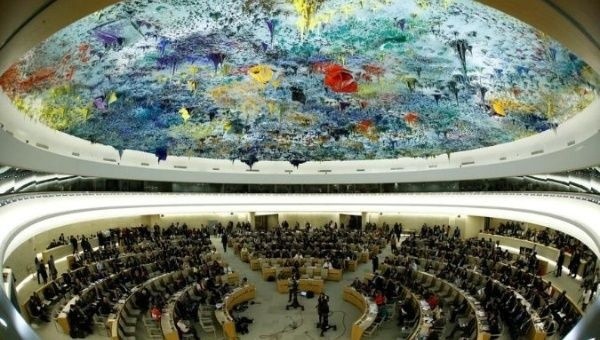 The draft resolution was approved with 28 votes in favor, 14 against and five abstentions, and was presented by Venezuela and Palestine on behalf of the Movement of Non-aligned Countries. Surprisingly Mexico abstained, joining another Lima Group countries.

The United Nations Human Rights Council adopted a resolution condemning the imposition of sanctions by the United States and its allies against Venezuela and other member states on Saturday.

The draft resolution was approved with 28 votes in favor, 14 against and five abstentions, and was presented by Venezuela and Palestine on behalf of the Movement of Non-aligned Countries (NAM) during the 41st session ofthe Council.

“I am grateful for the overwhelming support of the member states of the UN Human Rights Council for the resolution presented by the presidency of NAM in favor of Venezuela. A victory that expands international cooperation and rejects imperial sanctions,” Venezuelan President Nicolas Maduro tweeted Sunday.

The document also reaffirms the “inalienable right” of every country “to choose freely and develop, in accordance with the sovereign will of its people, its own political, social, economic and cultural systems, without interference from any other State or non-State actor.”

“Venezuela, as president of the NAM, presented a resolution to deepen international cooperation and reject unilateral coercive measures (sanctions) in the UN Human Rights Council, which was approved with large support from its member states,” tweeted Venezuela’s Foreign Minister Jorge Arreaza.

In May, the U.N’s special rapporteur on the negative impact of sanctions, Idriss Jazairy, expressed that the use of economic sanctions against Cuba, Venezuela, and Iran for political purposes violates human rights and international law.

Yet, this latest resolution comes at a key moment for Venezuela as its government has systematically rejected the report presented by the UN’s High Commissioner for Human Rights Michelle Bachelet. In it, Bachelet omits major social policies of Maduro’s administration and fails to mention the simultaneous economic attacks against the country by the U.S. government.

Since 2017, the White House has imposed 150 sanctions on individuals and entities of Venezuela, which, as the U.N. resolution reads, “hinder the well-being of the population of the affected countries and create obstacles to the full realization of their human rights.”

Just in the Latin American country, sanctions have resulted in the direct deaths of over 40,000 citizens due to lack of food and medicine, as well as a loss of around US$116 billion for Venezuela, according to the country’s Vice President of Planning Ricardo Menendez as well as a recent independent report from the Center for Economic and Policy Research.