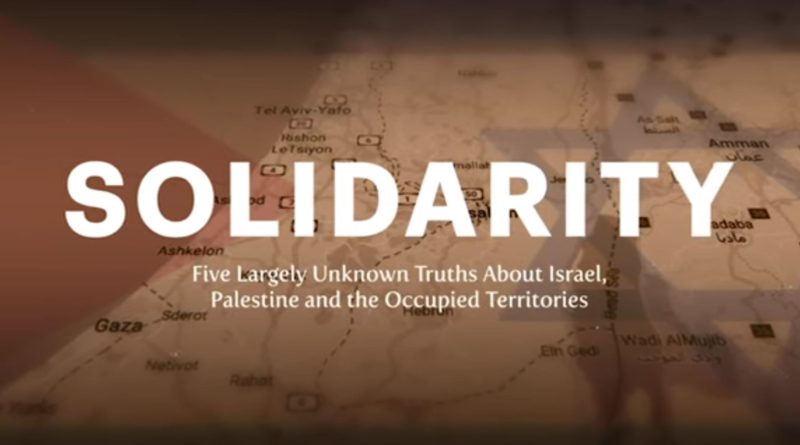 Often, I am asked for recommendations of video primers on the situation in Palestine.

I try to think of something that people can screen for their families, friends and neighbors that shows more than what corporate cable news channels or propagandistic Netflix series “offer.”

Austin, Texas-based filmmaker Bob Peck has just released a free documentary, Solidarity: Five Largely Unknown Truths about Israel, Palestine and the Occupied Territories, that I am happy to recommend.

RELATED CONTENT: No to a Nation-State Neither Jewish, nor Muslim, nor Christian

It’s a feat to coalesce 72 years of struggle against displacement, apartheid and racism into an accessible 110-minute film, but Peck manages this task well.

“Ultimately, I want to help educate Americans on the suffering of the Palestinians,” Peck told The Electronic Intifada.

Drawing on both historical and current struggles for Palestinians under siege, occupation and forced displacement, including the Great March of Return in Gaza, the film provides a stirring indictment of Israel’s settler project as well as that of the cable networks’ deliberate spin to shield Israel from accountability.

As the film’s title indicates, Peck divides the film into five themes: the expulsion of Palestinians during the Nakba, when 800,000 Palestinians were forced from their homeland in 1947-1948; Israel’s disproportionate violence against Palestinians; Israel’s continued expansion of illegal settlement colonies; the US’ financial support of Israel; and what’s behind the smear campaigns to label criticism of Israel’s policies as anti-Semitism.

Using exclusive interviews as well as footage from independent media sources, Peck incorporates first-person accounts from Palestinians whose families were displaced in the Nakba, as well as sharp analysis of Israel’s expanding policies of expulsion, control, resource theft and apartheid by young Palestinian American activists, Israeli conscientious objectors and members of Jewish Voice for Peace and other human rights organizations.

The boycott, divestment and sanctions (BDS) campaign features prominently in the last part of the film as a critical way to build solidarity with Palestinians struggling for human rights, justice and equality. The film makes the link to the struggle against apartheid in South Africa.

In the spirit of John Pilger’s Palestine is Still the Issue or Abby Martin’s Gaza Fights for Freedom, Solidarity is a film that unpacks the deliberate misinformation war on the Palestinian struggle and the complicity of the US in aiding and abetting Israel’s crimes. It is worth watching.