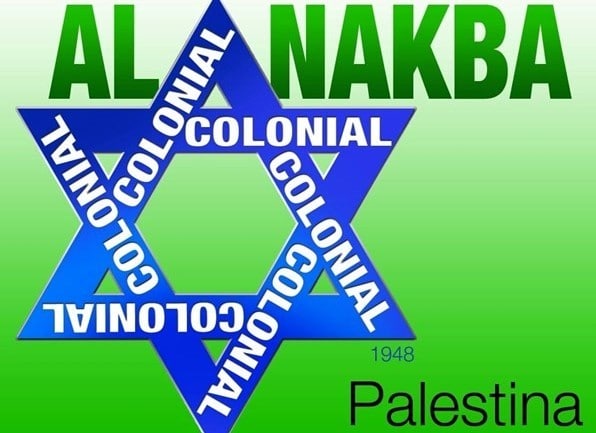 The reason why the colonial entity of (Israel) now asks to be recognized as the Nation State of the Jewish religion (they call it the Jewish people), is to abolish UN Resolution 194, which stipulates the Inalienable Right of Return of the Palestinian Refugees, which refers to more than 6 million people.

Secularism (the separation of the religious from the political administration) cost the nation-state much human blood. Today we can assert that the great contemporary majority reaffirm ourselves in secularism as a possible humanist vanguard.

But beyond secularism, theocracies and laicism as a political system in a nation-state, is to see today the retreat and mockery where religion becomes the demonym itself, is to see a nation-state that does not come from a people but of a religion.

It is to see how a denomyn is made from religion and not from ethnicity that is the root of every demonym. That did not exist even in the worst passages of obscurantism.

The call or reflection I am looking for in this article is, if we are sensitive and we believe in the values of secularism, why do we support a Jewish State.

Note. It is urgent to explain and clarify that Euro-Zionist colonialism, like in many settle states, not only colonizes territory, but also colonizes the history of native people and this fact has been allowed to make much of the world believe that (Israel), imposed in 1948 in Palestine is linked to the Hebrew people, to the Israelite, when in reality this is the ancestral history of the Palestinian Semitic people themselves. That (Israel) is founded by European Aryans who embraced the Jewish religion and founded it on the basis of the falsification of history.

Now, Israeli colonialism today asks to be recognized as the nation state of the Jewish religion. Attention, you are not requesting to be a confessional, theocratic State, which in fact it is, even if it hides it with its western stamp, but that religion and the nation-state is the same. To be Jewish is not only to be a co-religionist of that religion, but it becomes the condition of citizenship, the same name. Imagine a nationality, Jewish, a Muslim nationality, a Christian nationality, all this not in the Middle Ages, but in our 21st century.

There are Islamists who talk about the nation of Islam, that is manipulation. It would then be valid, and leaving the religious sphere, that the gay and atheist communities manufacture their nation-state.

The current plutocracy, the imperial atrophy in which humanity and colonial anachronism are still trapped with its fascinating intellectual academic sanctuary in which in some cases it is a pseudo-social-science, within our own secularism, can illustrate the Jews as a particular case, a hermaphrodite mutation of anthropology, a sui-generis … blah, blah, blah, everything to hide or justify a classic and colonial anachronism at the dawn of our 21st century.

The reason why the colonial entity of (Israel) now asks to be recognized as the Nation State of the Jewish religion (they call it the Jewish people), is to abolish UN Resolution 194, which stipulates the Inalienable Right of Return of the Palestinian Refugees, which are more than 6 million people.

The colonial entity of (Israel) has already taken the entire historical Palestine, the colonial / topographic battle has alse been won by them, but the demographic remains, and the native Palestinian population is growing more than the Israeli colonial population. The demographic issue is the real fear of that racist entity. Its fear is not Hamas, nor Arab tyrannies, nor Islamist terrorists, its fear is the womb of Palestinian mothers.

Golda Meir, former Prime Minister, in her memoirs confessed: My greatest fear is the birth of Palestinian children. The Minister of Justice, Ayelet Shaked, had said: We must kill Palestinian mothers. The construction of the Wall, which divides the Palestinians from the Palestinians, is to strangle the native population growth.

Now, it is not in vain that this colonial entity today supports Islamic terrorists, to fragment and balkanize Arab nations in religious states such as Syria, among others, and thus justify their reason as a State of the Jewish religion.

Here we see that the ethnological condition that has been the historical basis of every Nation State is being threatened and Arab ethnicity as well, with the establishment of Jewish, Muslim or Christian nation-states.

Now, before our secular, laic, humanist, leftist, progressive, liberal, political activists, human rights activists, democrats, revolutionaries, writers, artists, philosophers, feminists, intellectuals. To ethnologists, ethnographers, archaeologists, anthropologists, sociologists, jurists, historians, political scientists, theologians and the religious themselves, I ask: What are Jews, Muslims and Christians? A people or a religion? Transnational corporations are also the ones that define and determine, depending for example on the route of their gas pipelines.

We must free ourselves from our own self-censorship, where Eurocentrism / Zionist that, since the medieval inquisition, plus intellectual academic crime, blackmail us. I have self-censored and I feel piggy, accomplice / executioner, adulteress in my soul; Fear is an infidel that one carries within. I do not recognize the colonial regime of (Israel). From my fabric and human cortex, from my human sanity, I oppose colonial anachronism, Apartheid, denialism, racism, human supremacy and the extermination of my Palestinian Arab people. In addition, being a colonial entity, it is expansionist: taking territories from other Arab nations, creating the Greater Israel, is also the axis of the painful and inhuman conflicts throughout the Middle East. Let the think-tanks condemn me as a panfletary (the other is always the culprit), I will not censor myself. It was the Zionist lobby that dragged the United States to invade Iraq after the September 11 attacks and … the list is long.

Now, that many believers of the Jewish religion carry the feeling of the people, it is respected, but what we must never accept is the falsification of history to justify the colonization of Palestine and that it is also a colonization where there is a programmed ethnic cleansing practice in order to make the original people disappear, the Palestinian people that have been for much more than 11 thousand years in the light of the history of mankind. I am one of those who believes that the people may disappear in the face of the policy of the colonial power of (Israel).

But it is not about stopping in our narratives, but also challenging ourselves in giving justice to both parties in the face of this reality. It is imposter in our 21st century and in the face of good human faith the recognition of a religious nation-state that also has a colonial essence. The two States propossal (which is being violated) is a modality of colonialism, it is to curtail, alienate and nobody should renounce the universe of human dignity.

The solution is in a single nation-state (federative), in which the Palestinians and Israelis live in a democratic nation-state, with equal rights for all its citizens. A secular and secular nation-state. Where UN Resolution 194 is applied, which contemplates the Inalienable Right of Return of Palestinian Refugees.

The hallucinating Israeli colonial technological vanguard today seeks to be recognized as the Jewish State. However, it was enriching to see how through a national referendum the Republic of Bolivia was consolidated as a plurinational state, it was an instrument of survival for these millenary peoples. It was a tribute to the people, the indigenous democratic vanguard in Bolivia which has been overthrown by the American imperial atrophy that today sustains the Jewish State.