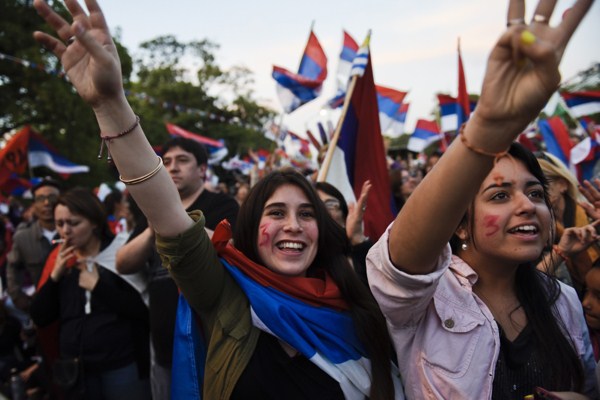 As several nations in South America are going through their worst economic-political-institutional crises, Uruguay —which has survived the neoliberal wave in the region— is going to face elections on October 27 that might change a system that has been benefiting most of its population.

Unemployment, indebtedness, tax adjustments, inflation, decreased purchasing power, hunger, and poverty is the general scenario readably observable in countries which have opted for implementing neoliberal policies imposed by the United States and international financial organizations with the consent of the local domestic oligarchies.

After four years in office for example, President Mauricio Macri burdened Argentina with an enormous debt with the International Monetary Fund (IMF), the Argentinean peso went from 16 to 60 per dollar; poverty increased to 41.2 percent of its inhabitants; public transportation prices doubled; electricity rates increased by 500 percent; while water and gas by 230 percent.

With extreme right-winger Jair Bolsonaro in the presidency of Brazil, following legal abuses against ex-president Dilma Rousseff and ex-candidate Luis Inacio Lula da Silva, all social programs were eliminated and a large amount of public companies were privatized; meanwhile, students and workers have gone to the streets to protest the new imposed measures.

In Paraguay, another nation geographically close to Uruguay, poverty has reached 32 percent of the population; thousands of peasants have been obliged to abandon their lands as large estates expand for soybean crop production and cattle raising, while inequality increases between rich and poor.

After winning the presidential elections in Ecuador in 2017 as a candidate for the political party created by Rafael Correa, Lenin Moreno did a 180-degree turn away from the social gains of the Citizens’ Revolution and decided to abide by the orders given by Washington. In the short term, he has cancelled social programs, reduced public spending to the minimum, and burdened the country once again with an IMF debt; resulting in the large protests in several cities of the past couple of weeks.

Meanwhile Colombia is becoming a place that is a more and more dangerous place to live by the day thanks to a government that is infested with drug trafficking and corruption. Farm workers and indigenous communities are being driven from their forcing them to migrate to the cities from the hunger and violence.

In this regional context, Uruguay is going to primary elections next October 27 and all surveys confirm that incumbent Frente Amplio is going to win with its representative Daniel Martinez, however indicate it will be close avoid a second round run-off on November 24 against his possible contender Luis Lacalle, from the Partido Nacional. If this is the way it goes the Frente Amplio would be facing the possibility that the three rightist parties despite having huge contradictions amongst them would coalesce around one to a form a new government that would usher in the ghost of neoliberalism to haunt the population.

RELATED CONTENT: Uruguay Withdraws From TIAR and Rejects its Application in Venezuela

During the last 15 years of Frente Amplio administrations, Uruguay has been able to maintain a relatively low level of poverty and inequality as well as high revenues per capita.

The Frente Amplio Government has a degree confidence from the people given low levels of corruption and the stability existing among institutions. The World Bank affirmed the country managed to reach superior ranks of equal opportunities in the access to health, education, fresh water, drainage, and electricity services.

Another very important indicator concerning citizens of advanced age is that about 87 percent of those who are older than 65 are protected by the retirement system.

The economy has continued growing and between 2003 and 2018, it became one of the most relevant and stable in the region with an average 4.1 percent growth per year. It is also significant that Uruguay’s gross domestic product remained stable despite the serious problems affecting two of its main commercial partners: Argentina and Brazil.

For all these reasons, current President Tabare Vazquez said that ahead of next elections,” Uruguayans shall see what is going on in Argentina, in Brazil, around the world, and view favorably what has gone on in Uruguay during the last 15 years.”

Even though the powerful right-wing media tied to the oligarchy is trying its best to bring about a change in Uruguay’s economic and political system, predatory neoliberalism will not enter one of the most stable countries in the region.