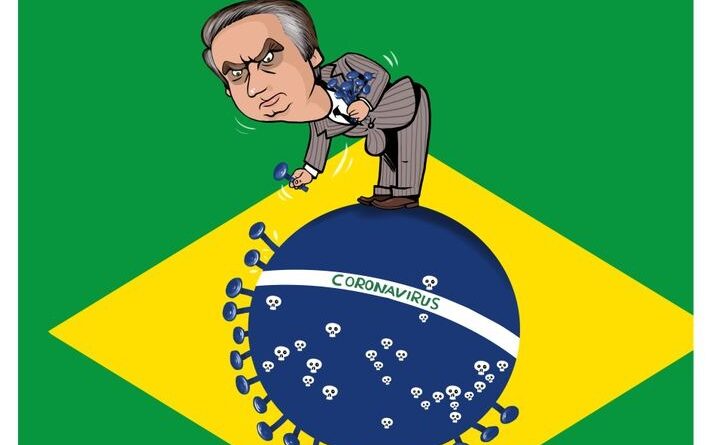 Carlos Alberto Almeida (Beto), one of Brazil’s most prominent journalists and political analysts, has been a member of the Telesur team since its foundation and has been a correspondent for this television station in the Latin American giant.

He is also a member of the Network in Defense of Humanity and the Editorial Board of Brasil de Fato and has played an outstanding role in the defense of the people.

Resumen Latinoamericano spoke with Almeida to find out about the latest events in the South American giant.

RL: How do you analyze the annulment of the charges against Lula by the Federal Supreme Court? What are the future steps in this process and what are the chances of Lula and the PT becoming a new government in 2022?

Beto: The overturning of Lula’s convictions is an expression of a division in the conservative camp. A section of those who organized the coup against Dilma Rousseff and planned Lula’s imprisonment calculate the result of all this as an enormous economic and social failure because four years ago Brazil was in sixth place in the world economy and now it has fallen back to twelfth place, as well as being the country with the second-highest inequality in the world. A large industrial-commercial sector, linked to the domestic market, foresees an even worse picture. This division is reflected in the Supreme Court and the media, which have participated in the coup.

The Supreme Court is now divided into two “legal” tendencies, one that annuls Lula’s convictions but not the trials that will be transferred to the Federal District Court, because it was technically incorrect for them to be in Curitiba, led by a judge who has falsified the entire trial, who acted like a man from Washington, and who through Operation Lava Jato planned to destroy Petrobras and all the strategic Brazilian companies that compete with US companies in Latin America, Africa and the Middle East. Minister Edson Fachin’s line allows Lula to be a candidate but keeps the Operation Lava Jato convictions and Lula under threat. The other line, that of Minister Gilmar Mendes, wants the suspension of Judge Sergio Moro, which would annul all the Lava Jato proceedings, although it does not have unanimity in the dominant bloc that is carrying out this review.

For example, TV Globo is already projecting an image of an innocent Lula, because it is seeking a new political agreement and wants to get rid of Bolsonaro, because of his political incompetence. In this new agreement, the sectors represented by the powerful TV Globo admit a new government with social program of the Workers’ Party, but not the revision of privatizations or the analysis of the demolition of labor rights or social security that has taken place in recent years. In any case, a conservative sector sees that only with Lula and the PT will another political agreement be possible. The participation of the military in this scenario has yet to be contemplated, and Lula recognizes that these forces must be included in a new sovereign project of strategic development. The game has begun, the ball is rolling and Lula is on the court. There are realistic hopes for progressive change. But the game is not over….

RL: What are your views on the two years of Jair Bolsonaro’s regime and what are its main mistakes?

Beto: It has been two years of demolition. Jair Bolsonaro said at the beginning that he came to demolish, not to build anything. And he is demolishing what was set up since the Getulio Vargas era: state companies, Petrobras, labor laws, social security rights, the structure of the professional public service. In foreign policy, the country has gone beyond the category of being a vassal of the United States, especially in Donald Trump’s administration, and now seeks a relationship with Joe Biden, but always under the subordination of the country. Instead of taking advantage of the immense strategic possibilities that the nation has as a member of the BRICS, the opposite is happening with Bolsonaro’s hostility towards China, Russia, and Mercosur. However, Brazil’s economic dependence on China and on international trade forces him to seek a pragmatic relationship with these countries, because there is enormous pressure from the productive and exporting sectors. The country’s delay in buying vaccines is the result of this obtuse foreign policy with criminal results because we are on the way to 300,000 deaths. There have been two years of demolition of the public patrimony and the state, and Bolsonaro continues the privatizations of Fernando Collor de Melo, Fernando Henrique Cardoso and Michel Temer, but with much more savagery.

Beto: It is very clear that the departure of Cuban doctors from Brazil has caused the increase in lethality with the pandemic because many citizens with illnesses who were being treated by these doctors were abandoned by Bolsonaro’s inhumane policy. This contributed, unfortunately, to the mortality of patients who were hospitalized without proper care. I should add that it was also a very serious crime against the Brazilian people’s right to health, and an unjustifiable aggression against the island’s professionals and the Cuban Revolution’s own history of humanism.

I consider it more than fair that the Nobel Peace Prize should be awarded to the Henry Reeve Medical Brigade as a most noble initiative in defense of Humanity, and at the same time, it would be a way of giving the Prize itself a chance to ennoble itself, since it has been given to such ignoble people in the past.

RL: What is your assessment of the situation in Brazil and, above all, of its people?

Beto.- Painful! How is it possible that a country so rich in niobium and oil has no hospital structures to treat its people, not even vaccines when it has aircraft factory? The health situation is depressing, with people dying in hospital queues and containers set up outside health centers to deposit corpses; with gravediggers in Manaus and other cities being forced to work overtime and even at night so as not to stop the burials. Unemployment has radically increased because Bolsonaro chose to prioritize the minimal state, that is, to make radical cuts in investment, to paralyze public infrastructure, health and education. He has abruptly demolished labor rights, weakened trade unions and forced workers to receive less than the legal minimum wage. Likewise, the paralysis of the shipbuilding industry resulting from the dismantling, step by step, of Petrobras, has led to economic and social stagnation in vast regions; the denationalization of oil and gas pipelines and refineries, forcing Brazil (which is self-sufficient in oil) to import crude oil derivatives so that a barrel of gas costs 50 dollars. People are going back to cooking with wood, in an oil country. That is why the unity of progressive forces, not only of the left, is urgent to confront this process of demolition commanded by Bolsonaro, who acts on behalf of imperial interests with the aim of eliminating industrialization and turning Brazil into a mineral, oil and agrarian colony.