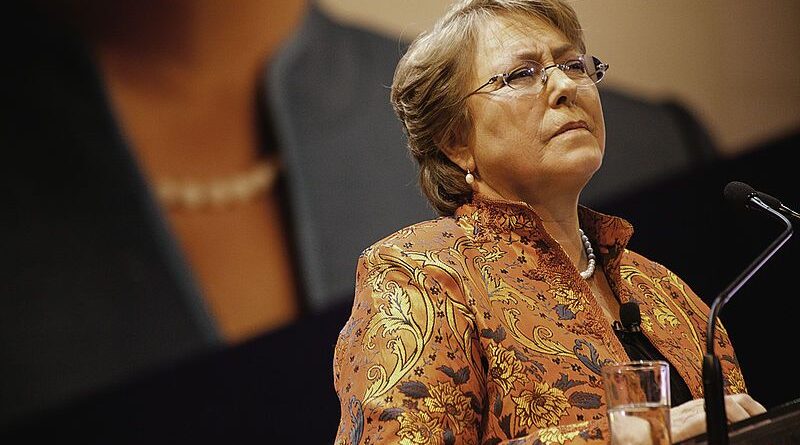 The United Nations High Commissioner for Human Rights, Michelle Bachelet, has forgotten the sad story of her and her family during the violent dictatorship of Augusto Pinochet and has long since turned to the forces of the Latin American right that denigrate the Venezuelan government and seek to overthrow the legitimate president, Nicolas Maduro, by any means.

Again she has gone to the poisonous charge against Caracas by openly declaring that the parliamentary elections were held under “pressure” on the voters by the government. The elected deputy to the National Assembly (NA) Diosdado Cabello rejected such remarks and called them “paid reports”.

“You [Bachelet] are so diligent in the case of Venezuela, and you say nothing about Colombia, Peru, or your country, Chile, they are tariff reports, because from these places they paid more”

Let’s remember that the high official of the UN is the daughter of Alberto Bachelet, brigadier general of the Chilean Air Force and member of the Popular Unity government led by Salvador Allende. Michelle studied medicine at the University of Chile, during which time she joined the ranks of the Socialist Party.

After the coup d’état of September 11, 1973, her father was arrested by the military dictatorship, tortured and killed in prison, and Michelle, along with her mother, Angela Jeria, went into hiding. In 1975 both were detained and tortured in Villa Grimaldi by the repressive agencies of the dictatorship, before going into political exile. That history of struggle has been fading in recent years.

A previous report manipulated by that entity after a visit made by the official to Venezuela, proposed more than 20 recommendations to Maduro’s government while omitting the numerous advances made by his administration in the field of human rights.

She did not mention the violent economic and financial blockade that the United States maintains over Caracas, the assassination attempts, the terrorist attacks or the victims of the violent events that occurred in the country during 2013, 2014 and 2017, in which a hundred citizens were burned and attacked for being “chavistas”.

While Bachelet continues to denounce the Bolivarian revolution, she ignores that the social and progressive organizations of Chile are engaged in a strong popular struggle to dismantle the Constitution imposed by Pinochet in 1980, after having filled the country with blood and pain through inhuman repression.

The massive protests in that South American country began in October 2019 when the government exacerbated the hardships of the majority of the disadvantaged population by imposing a 30% increase in the price of transportation.

Thousands of young people, students, workers and the middle class, who cannot afford the basic family basket and the privatized services of water, electricity, sewage, education and health care, took to the streets to reject the measure.

In the style of the Pinochet dictatorship, multi-millionaire President Sebastián Piñera ordered the repression of peaceful demonstrations that resulted in 45 young people being killed, hundreds injured, and thousands of detainees suffering torture and harassment in the prisons.

The carabineros (Chilean police) in addition to launching tear gas, unscrupulously fired their pellet guns at young men and women, causing 545 to lose the sight of one or both eyes.

The Chilean population is fed up with the privatization of basic services because most of them have to get into debt to be able to access medical care, education, housing, water, electricity, and sewage services.

In Colombia, 64% of citizens work informally; 18% work illegally, while 89% of wage earners have no social protection and 47.1% earn less than the legal minimum wage.

Colombia is the second most unequal country in Latin America, surpassed only by Honduras, and of the 43 million inhabitants, 22 million are in conditions of poverty.

It has been repeatedly denounced that current President Ivan Duque came to power through extortion, buying votes, loss of ballot boxes and even murder of opponents to induce fear in the population. However the United States considers Colombia to be its main bastion against the Bolivarian Republic of Venezuela, and the Bachelet knows that.

Bachelet did not observe on the walls of Medellín, a 750 square meter sign that denounced: “They are killing us”. And that is the reality that the whole nation is living with more than 70 massacres in the last four months, to which we can add the daily selective killings that since the signing of the Peace Accords in 2016, (violated by Bogotá) has murdered nearly 1 000 social leaders and 240 demobilized former guerrillas of the FARC.

Moving on to Peru, the reign of former President Manuel Merino imposed by Parliament only lasted five days after the vacancy of former President Martin Vizcarra was decreed. As was to be expected, the repression was unleashed with great police fury, which attacked the demonstrators, resulting in two deaths, about 50 wounded and many arrested, which led to Merino’s immediate resignation.

In the history of the Andean nation, a long list of crimes has been accumulated among former presidents and parliamentarians. From 1992 to date, Alberto Fujimori, Alejando Toledo, Alain García, Ollanta Humala and Pedro Pablo Kuczynski have been the first magistrates, all with extensive records of corruption, abuse of power or relations with drug traffickers. As for members of Congress, information from the database of the Public Ministry reveals that 68 congressmen are under investigation for various crimes, the same ones that caused the vacancy in Vizcarra.

These and other flagrant violations of human rights that are occurring in many countries of the American continent are not seen by Bachelet because her positions are increasingly directed from the United States with the sole purpose of aiming cannons at Venezuela, which they have not been able to destabilize because of the union of the people and the military with their legitimate government.