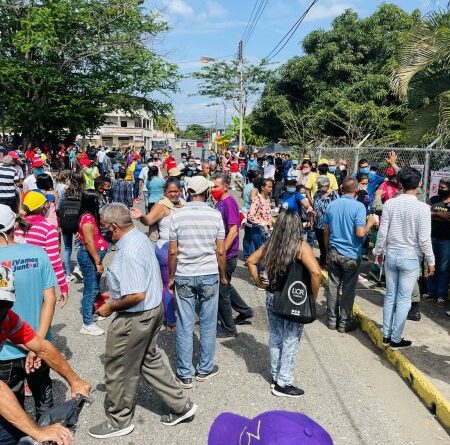 Acarigua, Portuguesa state, Venezuela – Long lines, including a lot of red-clad United Socialist Party of Venezuela (PSUV) supporters of the Chavez/Maduro party, wrapped around the block until 1 a.m. on August 9, waiting to vote for the tens of thousands of new candidates running in the primary regional elections. Polls were to close at 6 p.m. August 8, but Venezuelans felt energized to participate in the democracy and vote to continue the revolutionary policies of PSUV.

“75% of the candidates running are new candidates. Everyone knows that they can participate in our democratic elections and lead the country. PSUV has thousands of people running in the country and often 20 for one seat; whereas, the opposition party only has one person running for each seat because they don’t have enough members,” says Marifred Rodriguez, a 28-year-old Portuguesa state deputy to the National Assembly.

It is evident that Venezuelans support these democratic elections because after visiting three different polling sites, every single one was packed, with lines down the block.

“People in the USA say we have a dictatorship, but the elections are open to everyone. Everyone can run and people know that. You can’t see more democracy or candidate participation in any other country. It is impossible to cheat here. The machine won’t even open a ballot without your fingerprint. People sign their names and also put an ink fingerprint next to their signature. Chavez changed the elections this way to be more secure. The Carter Center said our elections are the most secure in the world,” says Rafael Torrealba, PSUV primary winner for mayor of Páez Municipality, which includes 198 communities.

At each polling place, taped to the walls, are long lists of everyone’s name who can vote there. The poll workers check the name of each person before they enter the polling place.

“We are here in Acarigua City, in the Páez Municipality of Portuguesa State. Today, the grassroots will decide who is going to represent us in the November 21 regional elections. As you can see, we are in peace and harmony, waiting in the line, to vote because we are one big team, one family. We are here in Venezuela building socialism,” says Hicter Angulo, a community member in line to vote.

“I am a journalist and a member of a local organization of socialist journalists. Today, we can show the world, that in Venezuela, there is a democratic system where our government representatives are chosen by the people, they are not imposed from outside our country. I fully support the PSUV because I am a community activist,” says Raúl Alexander Alvarado, a community member in line to vote.

Not only did Chavez and his PSUV party make the elections extremely secure and reliable, they also added gender equity by law. 50% of all candidates in the primaries must be women.

“Gender equality is mandatory in our elections. If there are ten men candidates, there must be ten women candidates. Our process breaks the world paradigm. We value and uphold the rights of women,” says Torrealba.

In this primary election, droves of women candidates and new candidates are running, but also young ones.

“More than 60% of the candidates are young. This is a way to build new leadership in the PSUV party. A lot of new young people run in city elections, do a couple of terms and then move up to national elections. We have 60,000 PSUV candidates running,” says Tulio Virguez, Secretary of International Relations of the National Federation of Public Workers.

“As PSUV supporters, we support one another to vote. The communes are especially political conscious. They use trumpet music to wake people up, since Chavez was in the military. Often, the community leaders each call ten people reminding them to vote. We also bring elderly and people with disabilities to the polling places,” says Tulio.

The regional elections will be in November 21. PSUV, Maduro’s party, is expected to win by high margins. This is especially evident after the high turnout for PSUV of the primaries.

“I expect we will win 85 to 90% for PSUV because Maduro handled the pandemic very well and people support him continuing the socialist programs Chavez began,” says Tulio.

Many Venezuelans discuss how they think leftist candidates are expected to keep winning this year and next, since they handled the pandemic so well.

“Lula, the socialist candidate of Brazil, will win. He is currently ahead by 30 points over the current president Bolsonaro. Bolsonaro is a fascist. His policies caused mass deaths during the pandemic. Trump’s policies did too. USA has the most COVID deaths and cases in the world,” says Rafael.

“I want to know, when will people in the USA wake up and support socialist programs that help the people?” asks Rafael Torrealba.