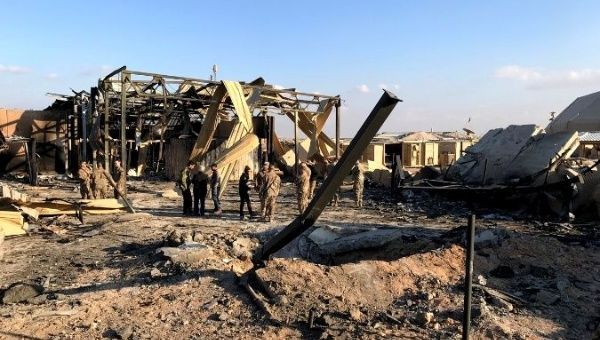 Despite initially saying no service members were hurt, the new figure elevates the injured to an even higher number than the military had previously announced.

Despite initially saying no service members were hurt, last week the U.S. military said 11 U.S. troops had been treated and transferred out of Iraq for concussion symptoms. However, the new figure elevates the injured to an even higher number than the military had previously announced.

Pentagon spokesman Jonathan Hoffman told reporters that 17 troops diagnosed had already returned to duty in Iraq, while the other half has been moved to the U.S. to receive treatment or have remained in Germany.

Meanwhile, U.S. President Donald Trump tried to downplay the fact saying he did not consider the injuries to be significant, saying he “heard that they had headaches and a couple of other things.”

The Pentagon reiterated there had been no effort to play down or delay the release of information on injured personnel.

Iran’s Revolutionary Guards launched a surface-to-surface ballistic missile attack on the Iraqi Ain al-Assad and Erbil airbases as a response to the U.S. killing of Iranian Major-General Qassem Soleimani on Jan. 3

After the strikes, Iran’s Minister of Foreign Affairs Javad Zarif explained that these were “proportionate and concluded measures in self-defense under Article 51 of U.N. Charter,” adding that the country “does not seek escalation nor war, but we will defend ourselves against any aggression.”

Zarif also explained that his country notified Iraqi authorities of the attack on U.S. bases, resulting in no casualties on the Iraqi side.

At the time of the attack, most of the 1,500 US soldiers at the base had bunkered down, after Iran had warned Iraqi officials, according to Iraq’s prime minister.