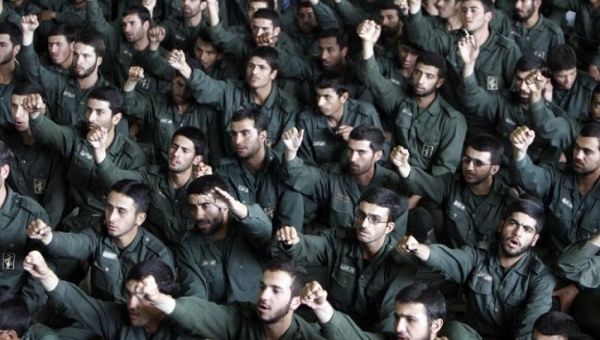 Critics have warned that the move could open U.S. military and intelligence officials to similar actions by unfriendly governments. The United States has already blacklisted dozens of entities and people for affiliations with the IRGC, but not the organization as a whole.

“The IRGC is the Iranian government’s primary means of directing and implementing its global terrorist campaign,” Trump said in a statement.

“This unprecedented step, led by the Department of State, recognizes the reality that Iran is not only a State Sponsor of Terrorism, but that the IRGC actively participates in, finances, and promotes terrorism as a tool of statecraft,” Trump added.

The designation “makes crystal clear the risks of conducting business with, or providing support to, the IRGC,” Trump said. “If you are doing business with the IRGC, you will be bankrolling terrorism.”

Secretary of State Mike Pompeo, a strident critic of Iran, has pushed for the change in U.S. policy as part of the Trump administration’s tough posture toward Tehran.

“A country, which has no other track records but arming, supporting and harboring terrorist groups, considers an official armed force of another country that has always been a pioneer in helping people and defending the Islamic movements, as [a] terrorist [organization],” Iran’s Judiciary chief Ayatollah Seyyed Ebrahim Raeisi said in response to the U.S. decision.

Raeisi also mentioned that this measure of the U.S. is also doomed to fail like every other previous measure against Iran.

“If the Americans make such a silly move and endanger our national security, we will implement and put reciprocal measures on our agenda based on the policies of Iran’s Islamic establishment,” Major General Mohammad Ali Jafari said.

The IRGC was founded after the 1979 Iranian Revolution which saw the overthrow of the U.S. backed monarch and replaced it with the Islamic Republic. The regular military, Artesh, defends the country’s borders and the IRGC is tasked with protecting Iran’s Islamic Republic System.

The announcement comes shortly before the first anniversary of Trump’s decision to pull out of a 2015 nuclear deal with Tehran and to reimpose sanctions.